This is a complete break from my usual posts. For this, I took a dive into my archive to revisit the immigration issue. I covered immigration, in the US, in Mexico and in Guatemala, from 1996, when we moved to El Paso, TX., until 2012, when we left Phoenix and moved to Bangkok. From 2001 until 2009, I covered immigration, and immigration related issues, almost exclusively. Please follow the links for more on the issues I'm writing about. 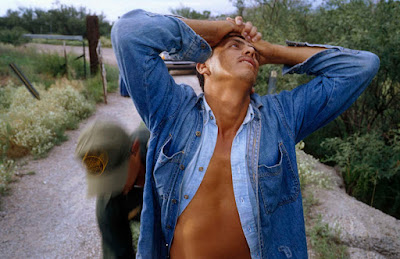 A US Border Patrol agent detains a Mexican national trying to enter the US illegally near Sierra Vista, AZ. (27 July 2001)

The President is lying about immigration. It is past time to explicitly say that. How do we know he's lying? The easy, snarky, answer is that it's because his lips are moving. Politifact, the Pulitzer Prize winning fact checkers, found 69% of trump statements "Mostly False," "False," or "Pants on Fire". And while saying the President is constant lying might be objectively true, it doesn't move the discussion forward. 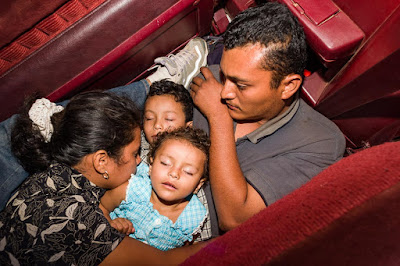 A Mexican family from the state of Jalisco hide in the back of a car crossing the border. They were apprehended on the Tohono O'Odham reservation, southwest of Tucson, AZ. (5 May 2003)

In the interest of moving the discussion forward, here's how we know he's lying.

First we have to establish the difference between a lie and a misstatement. No one can truly know what is in the heart of another person. Is he lying because he's misingformed and therefore unaware of the truth? Are statements from the stump signs of true animus or merely playing to the crowd? Because of this, I am willing to give a person a pass on their first utterance of a false statement. 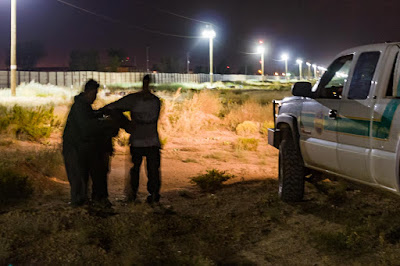 Mexican nationals, apprehended in Douglas, AZ, walk to a Border Patrol vehicle. They were taken to the BP station in Douglas, processed and returned to Mexico. (5 October 2005)

The President is lying about an out of control border. How do we know? We can look at the Border Patrol's numbers. The Border Patrol's numbers show that undocumented immigation is down, significantly, since 2000. In the Tucson sector, where I did most of my work, the Border Patrol apprehended 616,346 people in FY2000 (Fiscal Year). By FY 2008, it had been cut almost in half to 317,696. And by FY 2017, the number was down to 38,657. That's a decline in apprehensions of about 94%. That is not an "out of control" border. That is a sign that deterrence is working. 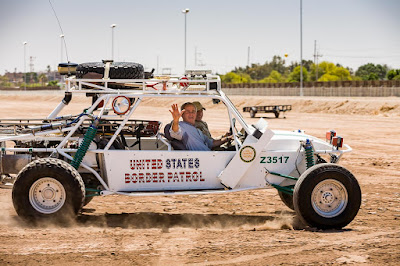 Trump isn't the first President to politicize the border. President Bush also used immigration as a political tool. During a visit to the Yuma, AZ, sector, he got to play in a Border Patrol dune buggy. (18 May 2006)

The President famously kicked off his campaign saying that Mexican immigrants were evil people, "They’re bringing drugs. They’re bringing crime. They’re rapists." Since he's become President he constantly repeats that claim, calling Mexican (and other immigrants) "animals" "vermin" and an "infestation." Leaving aside the horrific, fascist nature of those statements, let's look at their truthfulness. Are immigrants coming to the US criminals? Do immigrants bring crime?

In terms of overall crime, statistics show that immigrants do not bring crime. The immigrant population is up by 118% since 1980. Violent crime is down by 36% over the same period. The President has had several opportunities to correct himself. He has not. He is lying.

One of his favorite targets is MS-13, the brutal American criminal gang, established in Los Angeles in the 1980s, that set up branches in Central America and is now transnational. Are they flooding across the border?

The numbers say no, MS-13 is not flooding into the country.

Through March of this year, the Border Patrol apprehended just 123 members of MS-13. Out of a total of 66,000 apprehensions. If Trump has imaginary boogeymen, they are almost certainly MS-13. The President has had several opportunities to correct himself about his wild MS-13 claims. He has not. He is lying. 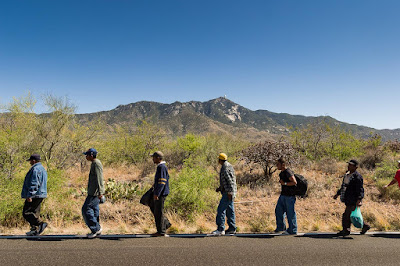 A group of Mexican immigrants trying to get to Phoenix, walk along AZ86, east of Sells, towards Tucson (Kitt's Peak Observatory is on the mountaintop center right). The early 2000s were a wild time on the border. It was a little unusual, but not unheard of, to see groups of immigrants walking along the side of the road. They frequently had lookouts ahead and behind the group to watch for Border Patrol. This group was ultimately apprehended. (5 May 2003)

The President repeatedly blamed Democrats for his recent policy of separating children from their parents. He said he was forced to do it because of a law passed by Democrats in 1997 and, furthermore, he alleges, President Obama separated children from families during a migrant crisis in 2014. I am not willing to give him a pass for his first utterance of this lie.

On June 5, 2018, he tweeted, "Separating families at the Border is the fault of bad legislation passed by the Democrats. Border Security laws should be changed but the Dems can’t get their act together! Started the Wall.  6:58 PM - Jun 5, 2018"

There is no 1997 law requiring family separation. None. He is lying when he says there is. He might be referring to the 1997 "Flores Agreement," which settled a lawsuit against the federal government that started during the Reagan administration.

The Flores Agreement doesn't mandate separation of families and indefinite detention of children. In fact, it specifically forbids separating children and indefinitely detaining them. Flores specifically states that minors in U.S. immigration custody be provided with “contact with family members who were arrested with the minor.” Trump officials are ignoring this and are lying when they blame the separations on Democrat administrations. 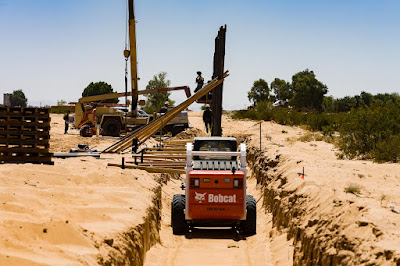 Members of the National Guard work on the border wall near San Luis, AZ. Mexico is on the right side of the photo. (16 June 2006) 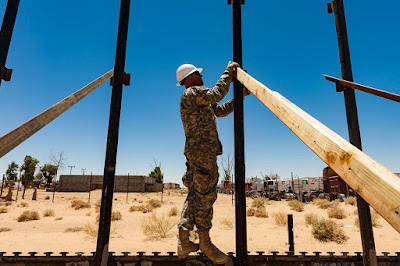 A National Guardsman connects a support joist to the a new section of the border fence. A truck storage yard in Mexico is in the background. This picture was made 10 years before Trump's "border wall" became a national obsession. (16 June 2006)

(Also, the "Started the Wall"? Another lie. There is no new wall construction ongoing, only maintenance of existing segments of the wall.)

The second lie is that President Obama got a free pass from progressives and civil rights groups for his immigration policies. Although he didn't separate children from parents, he did put thousands of children, who crossed the border as unaccompanied minors, into detention and deported them back to their countries of origin during a migrant crisis in 2014. In fact, President Obama was heavily criticized for his immigration policies vis a vis unaccompanied minors.

Pictures from 2014 showed unaccompanied children in cages (those photos were mistakenly used again this year without being labeled file photos). There was an outcry then about children in cages then just as there is now.

The Atlantic ran a piece critical of Pres. Obama for fundraising in Texas but not going to a children's shelter. The National Catholic Register was very critical of the President's handling of the 2014 border crisis.

Rick Perry, and other Texas officials, were very critical of President Obama and their criticisms were repeated by every media outlet reporting on the crisis. In general, there was significant criticism of Pres Obama for his handling of immigration issues from the left. Many called him the "Deporter in Chief" because of his strict immigration policies and the fact that his administration deported more people than any previous administration did. When Trump says President Obama was not criticized, Trump is lying. 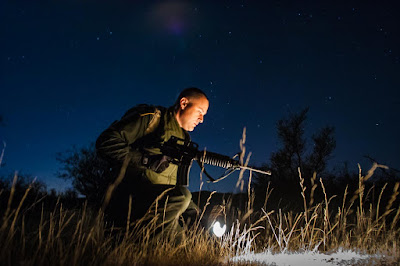 Every President finesses the truth and uses "spin" to present his policies in the best possible light. No President before this has lied as often, as brazenly or about as many things. It's time for newspapers and journalists to stop dancing around this issue. When the President lies, whether in an official setting, on Twitter, or from the campaign trail, journalists need to call him out. The headline should be "The President Lied During Campaign Event." The headline should not be "The President Repeats Claims that Obama Separated Families" or "President Blames Democrats for Child Separations". Every time media outlets, like the New York Times or Vox, repeats the President's lies, they give the lies credibility. 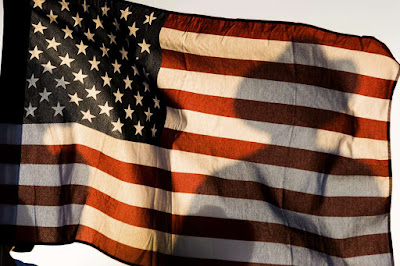