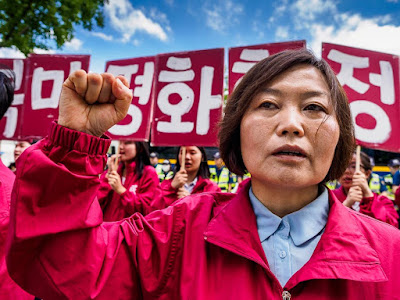 Members of the South Korean People's Democracy Party, a progressive South Korean political party, demonstrate in front of the US Embassy in Seoul in support of the Trump-Kim summit in Singapore.

Earlier this year South Korean President Moon Jae-in and North Korean leader Kim Jong-un met for meetings in the Korean DMZ. It was a significant thawing of relations that had grown very frosty because of North Korea's development of nuclear weapons, long range missile tests and bellicose tweets from the American president. South Koreans gathered by the thousands to watch the meeting on large screen TVs throughout the country.

The world was surprised when, after the Inter-Korean Summit, the "Dotard" and "Little Rocket Man" decided to hold a bilateral summit to address their issues. American conservatives, who were outraged when President Obama said he was willing to meet with Kim embraced Trump's decision.

I went to Seoul expecting that people would be as transfixed by Trump meeting Kim as they were by President Moon meeting Kim. I was disappointed. The reaction in Seoul was very subdued. 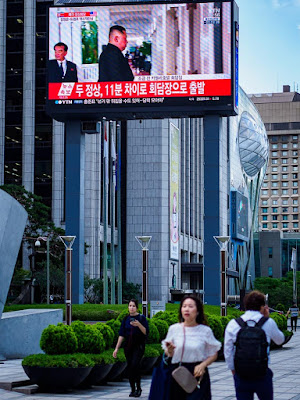 The US Embassy, usually a gathering spot for demonstrations regarding the US presence in South Korea (for both supporters and opponents of the US presence), was quiet. There was a phalanx of South Korean police around the embassy, but they were bored with nothing to do. Only the  South Korean People's Democracy Party showed up, and it is a small party with no members in the National Assembly. 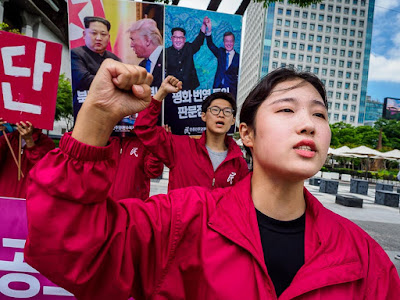 Members of the party gathered across the street from the embassy and chanted during the sumit.

I photographed the protest until it broke up and then went out and looked for other photos related to the summit but didn't get anything. In the evening I went back to the embassy and there were two women there protesting against the presence of the US THAAD (anti-missile defense) deployment to South Korea. 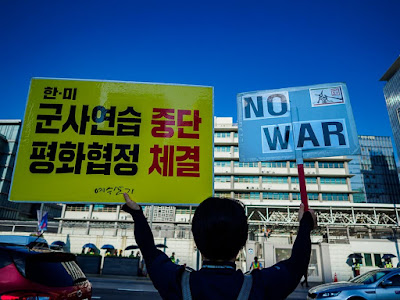 A woman in front of the embassy protesting the THAAD deployment.

There are more photos of South Koreans' reaction to the summit in my archive or available from ZUMA Press.