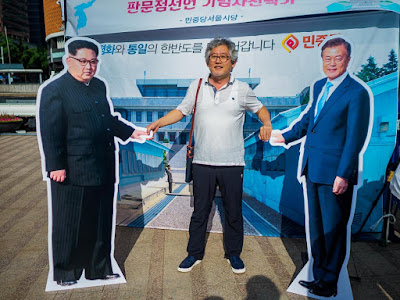 A man stands between cardboard cutouts of North Korean leader Kim Jong-un and South Korean President Moon Jae-in during a celebration of the anniversary of the June 15th North–South Joint Declaration in Seoul.

The June 15th North–South Joint Declaration has been celebrated off and on in South Korea. It marks the agreement signed on June 15, 2000 between then President Kim Dae-jung of South Korea and then Supreme Leader Kim Jong-il of North Korea (both are deceased). It was the culmination of Kim Dae-jung's "Sunshine Policy" with the North and an effort to bring North Korea into the community of nations, with a goal of reuniting the peninsula. 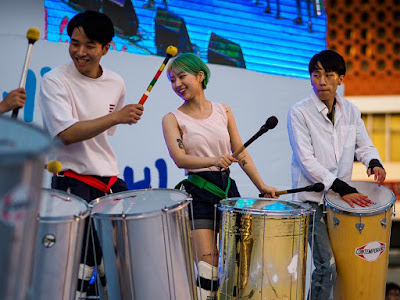 A drum line performs during the celebration... 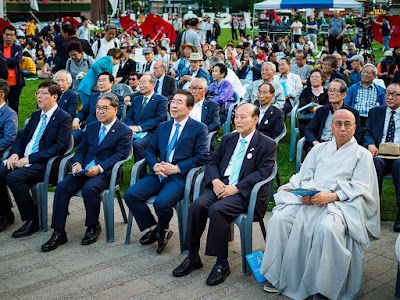 ...while Park Won-soon, the mayor of Seoul (front row, center) and other VIPs watch. Park is an ally of South Korean President Moon Jae-in, who in turn, was a supporter of Kim Dae-jung.

The Sunshine Policy was regarded by many American academicians as a failure and as relations soured between North Korea on one hand and South Korea and the US on the other hand observances of June 15 became smaller or the day was ignored completely.

But the recent thaw in relations brought on by the Moon Jae-in / Kim Jong-un Inter Korea Summit in April and Kim's meeting with Trump in Singapore earlier this week has renewed the hope that some South Koreans have for a peaceful resolution to the peninsula's conflict. This year's observance of the June 15 anniversary was reported to be the largest in years. 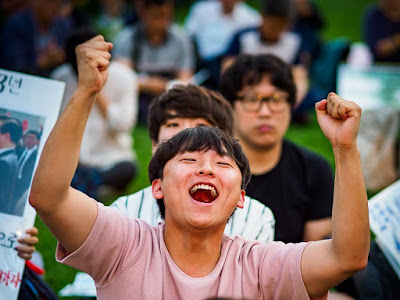 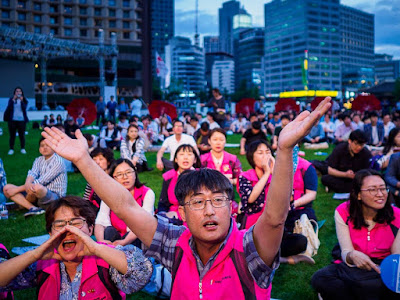 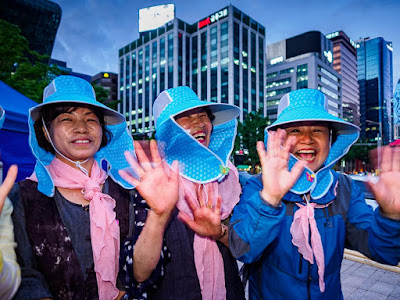 The general mood at the event was optimistic and happy.

There were several hundred people at the rally, so it wasn't huge, and many in South Korea are not convinced the recent turn of events signals a sea change or is a temporary thing, like the passage of a storm before an even bigger storm swamps the boat. South Koreans are stuck between mercurial leaders (Trump and Kim) and what's said one day may not apply the next day. 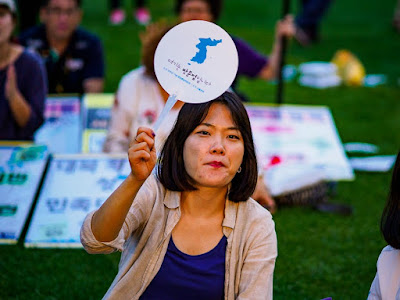 A woman with a placard bearing the silhouette of a reunited Korea.

There are more photos of June 15 party in my archive or available from ZUMA Press.

Finally, most of the photos in my archive are available for editorial use or self fulfillment as prints. If you see something you'd like to use or just hang on the wall, click on the "Add to Cart" button and follow the onscreen prompts.
Posted by Jack at 13:00