The Political Rebirth of Joe Arpaio

I revisited my archive of Arpaio photos in light of President's Trump's announcement to grant a presidential pardon of Joe Arpaio. These photos were made while I was working in Phoenix 1999-2012. Lots of links to topically related stories. 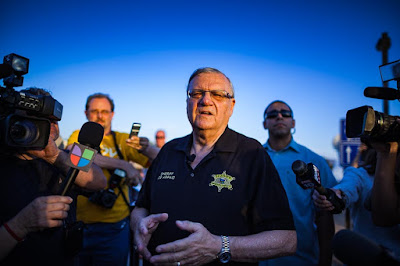 June, 2012, Arpaio walks through a crowd of reporters during a protest in front of his jails on Buckeye Road in Phoenix. The protest was organized by the Unitarians and was one of the largest anti-Arpaio protests in Phoenix.

Joe Arpaio, the former sheriff of Maricopa County, loved the spotlight. He basked in its warm glow. Needed it, like an addict needs heroin. He sought it out incessantly. He didn't do anything during his tenure at the Maricopa County Sheriff's Office without first considering how it would burnish his reputation.

In my 13 years in Phoenix, I saw Arpaio make just one principled decision.

In April, 2005, an off duty Army reservist pulled into a rest area on Interstate 8. He saw several Hispanic men there and assuming they were undocumented immigrants, claimed "self defense," pulled a gun on them and made a "citizen's arrest." Maricopa County's newly elected Republican County Attorney Andrew Thomas (since disbarred for bringing false prosecutions against political opponents) called the reservist a hero. Arpiao, in the only principled decision I saw come out of his office, called the reservist's claims "hogwash" refused to arrest the immigrants and, in fact, arrested the reservist. 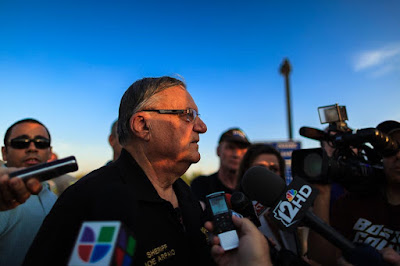 Arpaio's base, the white middle class and working class retirees who live in the mass produced, cheap prefabbed suburbs that ring Phoenix, people who delight in seeing prisoners humiliated in pink underwear and chain gangs, turned on their law and order hero with a vengeance seldom seen outside the animal kingdom and supported County Attorney Thomas (again, disbarred for politicizing his office and ethical issues). In that moment, an era of open racial profiling, sanctioned police state tactics, was born.

Arpaio and his PR staff huddled amongst themselves and they recast Arpaio as an anti-immigrant firebrand. He spent the next 10 years terrorizing Hispanics in Maricopa County. 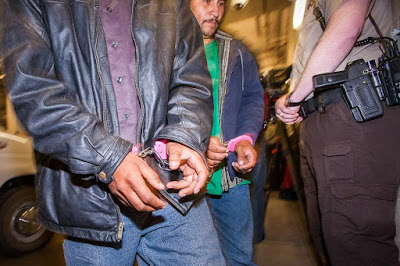 March 2006, men suspected of being undocumented immigrants are marched into Maricopa County Jail after a "crime sweep." 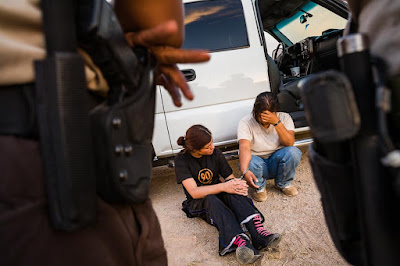 May 2006, women suspected of being undocumented immigrants await transport to the county jail.

Less than a year later, the sheriff's deputies were engaged in a series of "crime sweeps" that targeted Hispanic sections of Maricopa County (like many counties in the south, still segregated in all but official policy) pulling over drivers for petty offences, like a busted taillight or cracked windshield or failing to signal a turn, running ID checks on everyone in the car and then arresting anyone who couldn't prove their immigration status. US citizens and legal immigrants, who left their homes without ID, were also arrested in these sweeps.

Arpaio was not above using any humiliation of Latinos to get the attention he craved. In February, 2009, Arpaio marched 200 undocumented immigrants across his jail complex in Phoenix and housed them together in tents surrounded by electrified fences. The men were shackled together while tactical teams kitted out in body armor and carrying automatic weapons and shotguns, under the watch of a MCSO helicopter, accompanied them. Almost every media outlet intown was there to record it. 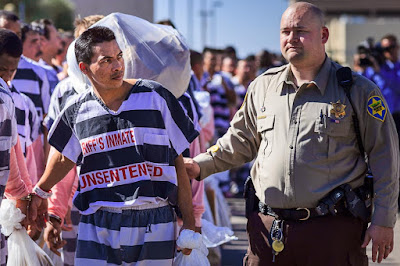 February 2009, a MCSO Detention Officer holds onto an undocumented immigrant prisoner during the march across the county jail. 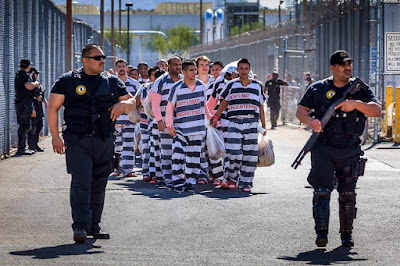 Detention officers and members of the SWAT Team escort prisoners through the jail complex to the tents surrounded by electrified fencing.

The sheriff's immigration sweeps and raids soon impacted every aspect of Latino life in Maricopa County.

Working on a story about the impact of the raids on immigrant businesses, I went to a local weekend "flea market."

Although it was called a "flea market," it didn't deserve that title. It was a permanent fixture, with paved parking lots, covered walkways and acres upon acres of shopping. It was much more of a traditional Mexican mercado than a southern flea market.

There was entertainment. Everything from mariachis to folklorico dancers to norteño performers to "lucha libre" (Mexican wrestling). There was food, some of the best Mexican regional cooking in Phoenix and a smattering of food shops from Central America. It was a weekend family destination, not just to shop but to eat, socialize and be entertained.

On the last day I went, the place was practically deserted. I talked to one of the entertainers in the mercado, a US citizen of Mexican heritage and he said to me, "What you (Anglos) don't understand is that for us (Latinos), this is like Germany in 1938. When our children go to school in the morning we don't know if we'll see them again. When we go grocery shopping, we don't know if we'll come home again. We are being hunted by brown shirts. This is a horrible way to live." The "brown shirt" comment was not a matter of Godwin's Law. It was literally true since the sheriff's uniform is brown. 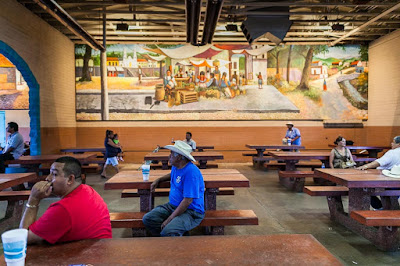 August, 2010, one of the food courts at the mercado. This place used to hum with activity. It closed a few months after this picture was made.

It was a cruel irony that as Arpaio made life increasingly hard for Latinos, life for journalists, at least the ones he liked, was incredibly easy. He always called us before he launched a "crime sweep." He could have moved the prisoners through jail complex without fanfare, but he called us so we could document it. If we wanted to do a story in the tents or about the chain gangs (he used the woman's chain gang to bury indigents in Maricopa County's version of Potter's Field), we could set it up with a single phone call. The media was his willing collaborator for many of the things he did. October, 2009, the nadir of my personal Arpaio coverage. When a witch from Las Vegas, (named "Magickal," I am not making that up) came to his office to cast a spell and change his karma. The spell did not work. His karma got worse. Or maybe it did work. The witch won't say.

Although I was uncomfortable with the way Arpaio used the media, I felt it was important to document what he was doing. I now wonder about that decision. Would he have withered away if we had ignored him? I don't know the answer to that. Were we critical enough of him? We were not. 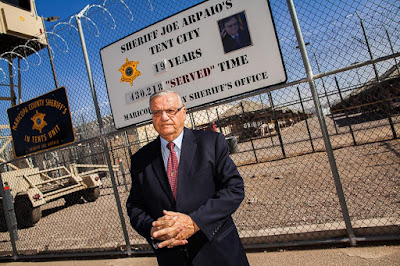 The exception was New Times, whose reporter Stephen Lemons, earned the eternal enmity of  Arpaio and his retainers. New Times reporters were barred from MCSO properties, even when public press conferences were called. New Times did more to bring about the Sheriff's eventual downfall than the other media outlets in town combined.

We left Phoenix (to move to Thailand) in 2012 but at that point the writing was already on the wall for Arpaio. Public opinion had (finally) turned against him. There were weekly protests in front of his office in the Wells Fargo Building in Phoenix. Wells Fargo, the banking conglomerate, grew so weary of community outrage against Arpaio they evicted him from their building. Think about that. Joe Arpaio was too deplorable for Wells Fargo, a company with a deplorable record in its own right. 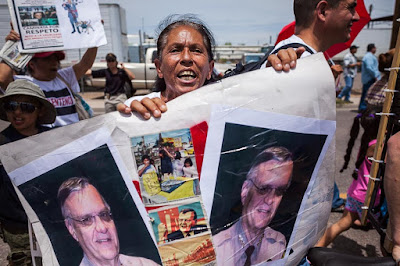 An anti-Arpaio protest in front of his jail complex.

The Department of Justice, under President Obama, launched investigations into allegations of racial profiling and prisoner abuse in the MCSO. Arpaio lost almost every lawsuit filed against him, costing county taxpayers millions of dollars.

Arpaio responded to the DoJ investigations by joining the "birther" crusade. While actual crimes in his jurisdiction went uninvestigated, including the rape of children, he sent investigators to Hawaii to prove that President Obama was a Kenyan sleeper agent.

Arpaio's birther nonsense attracted the attention of another birther proponent. Arpaio and Donald Trump became fellow travelers on a journey fueled by racism.

Ultimately, Arpaio was unable to outrun what fate had in store for him.

First he lost reelection in 2016 to Paul Penzone, a Democrat, and then, in July of this year, he was convicted of criminal contempt for ignoring a US District Judge's orders and lying about it. Arpaio faced a sentence of up to six months in jail. He was free awaiting sentencing.

For a brief moment it looked like Arpaio might have to atone for his crimes, but Donald Trump, Arpaio's favorite Don and fellow Birther enthusiast, saved the disgraced sheriff by pardoning him. And justice is denied for thousands of people victimized by Arpaio's need for adoration and criminality within his department.

If there's a silver lining to the Arpaio pardon, it's that the pardon, coupled with Trump's tepid response to white supremacists and neo-Nazis marching in Charlottesville and killing Heather Hyer, a civil rights' activist, most Americans are starting see Trump for who he is and even members of his own party are distancing themselves from him.

Arpaio, for his part, thanked Trump and then commented that he might get back into politics, he told the Arizona Republic, "But now I've decided I'm not through with politics because of what's happening. I didn't ask for a pardon. It has nothing to do with a pardon. I've been saying this for the last couple of months. I've got a lot to offer."
Posted by Jack at 01:58