(This is the last blog entry from our trip to Minneapolis) 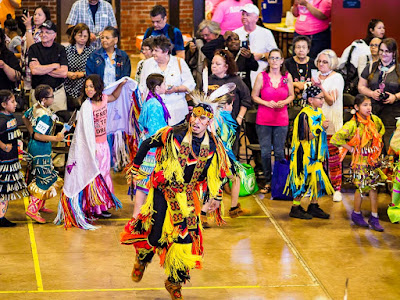 A dancer performs during the Grand Entry at the Powwow for Hope at the Base Camp in Ft. Snelling.

The last thing I photographed before we left the Twin Cities was the Powwow for Hope, a fundraising powwow sponsored by the American Indian Cancer Foundation. The powwow was an intertribal with hundreds of dancers, most from the upper Midwest. 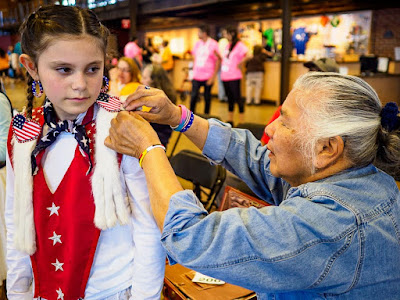 One of the youth dancers gets help from her grandmother while she gets ready for the powwow. She said three of her uncles battled cancer, and one, a Vietnam era veteran, died of lymphoma traced back to Agent Orange exposure.

I covered a lot of powwows when we lived in Arizona, which has a large Native American community (the Navajo Nation, in the northwest corner of Arizona and crosses into New Mexico and Utah, is the largest reservation in the US), but I haven't covered a powwow since moving to Thailand in 2012.

This powwow was unique because it was a fundraiser for cancer research and to support Native Americans (and their families) battling cancer. I think when people consider the health issues facing Native Americans they generally put heart disease and diabetes at the top of the list.

Certainly in my time photographing Native Americans in the Southwest, a recurring health theme was heart disease and diabetes, which is rampant on reservations. Generally for the same reasons they're rampant in inner city communities and poor rural communities - the low cost, high calorie, processed food diets of people in poverty lead to so called lifestyle diseases. But according to the American Indian Cancer Foundation, cancers are actually the leading cause of death for Native Americans (at least in Minnesota). 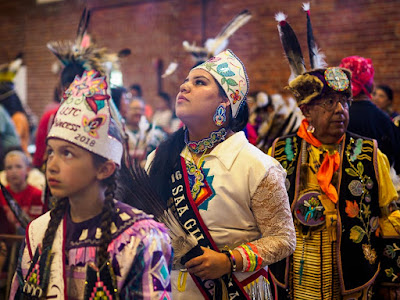 Dancers line up for the Grand Entry.

The powwow lasted most of the afternoon and featured intertribal dances, dances for survivors, team dances, healing dances and healthy food (i.e. no frybread). It was a good way to spend an afternoon. 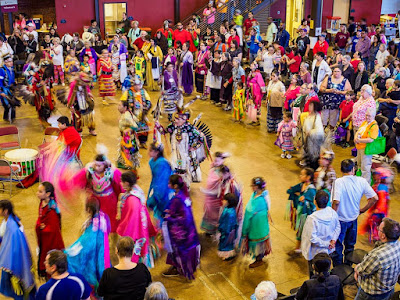 A slowish shutter speed exposure of dancers in the Grand Entry.

On a technical note, I photographed the powwow with my Olympus E-M1 Mark II bodies. I traded in my several years old E-M5 Mark II bodies and bought the new bodies while we were in Minneapolis. They performed very well but what I was happiest about was the autofocus, which in single shot is very fast but even the continuous autofocus worked nearly as well as it did in the Canon 5D Mark III bodies (that I stopped using in 2014). I was very happy with the E-M5 Mark II bodies, but I thought the continuous AF was their Achilles' Heel. 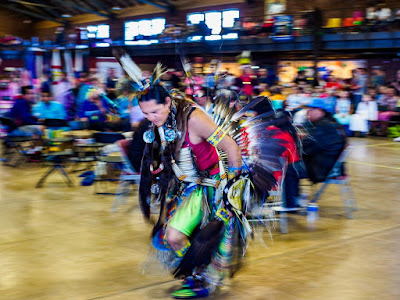 Dancing during an intertribal.

It was not an exhaustive test of continuous autofocus, but it was much better than the C-AF on any of the other mirrorless bodies I've used. I will be testing it more in future weeks. 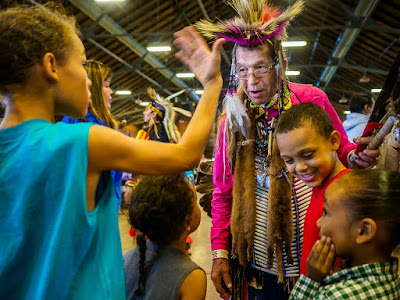 A tribal elder talks to kids and encourages them to join an intertribal dance that didn't require fancy dress.

There are more photos of the powwow in my archive.