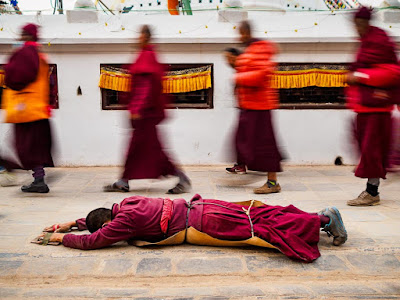 A Buddhist monk prostrates himself as other monks walk clockwise around Boudhanath Stupa during morning prayers.

One of the most lovely parts of Kathmandu is the area Boudhanath Stupa. It's the center of Nepal's Buddhist community and the heart of the Tibetan exile community in Nepal. Although the exact date of the stupa's construction is unknown, based on the history of the Kathmandu valley it's thought that the stupa was built sometime between 464CE and 604CE, although some put the construction much later - around the 14th century CE. It's been rebuilt since then of course, most recently just last year, to repair damage from the 2015 Nepal earthquake. Rebuilding or not, the sense of history at the stupa is palpable. 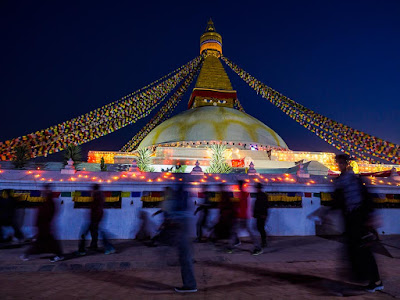 A time exposure of people walking around the stupa before sunrise during morning prayers.

I got to the stupa about 05.00, before the crowds arrived. (In this case crowds refers to Nepalese and Tibetan faithful - very few tourists show up for morning prayers.) By 05.30 though the stupa was very crowded with people walking clockwise around the stupa, reciting Buddhist mantras. The monasteries around the stupa open their doors for morning prayers around 05.45. People don't come in and sit in pews as they do in Christian churches though. 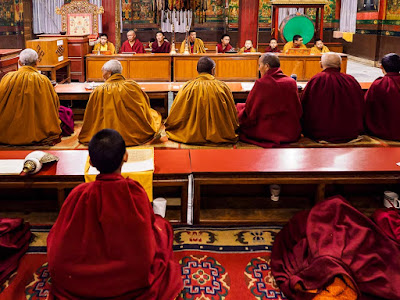 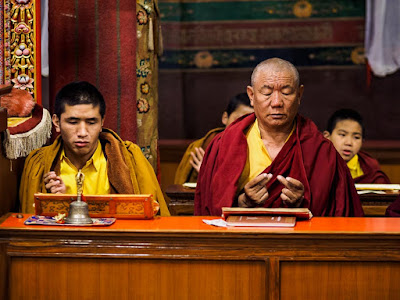 Morning prayers in a monastery at the stupa.

Monks sit and chant in the prayer hall while people come in and walk clockwise around the room lighting butter lamps and reciting mantras. 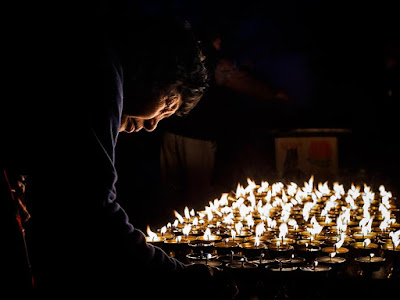 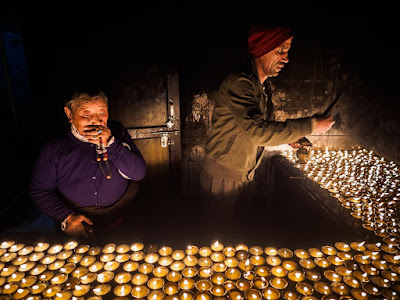 People light butter lamps at monasteries around the stupa.

The process is always repeating itself, the faithful seemingly unaware of the few tourists who do show up. 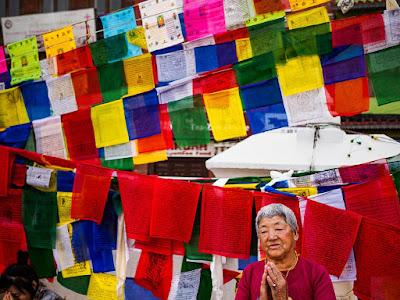 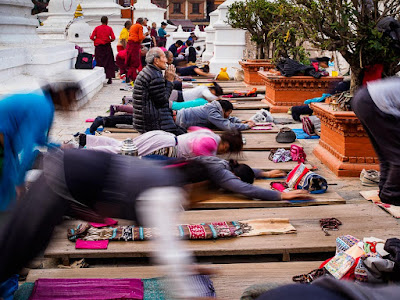 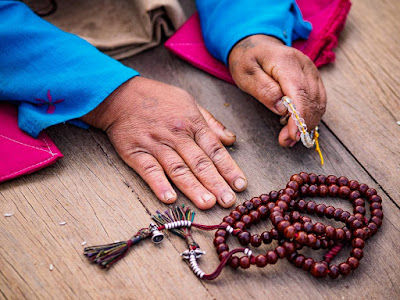 In a small prayer area at the base of the stupa people come to pray and prostrate themselves on wooden boards.

Most tourists go to the stupa in the evening, especially on full moon nights (there's a full moon ceremony every month) but I think the best time to go to the stupa is early. It's a little less convenient, especially if your hotel is across town or in the Thamel area, but the experience is much more rewarding.

(All of the photos were made with my Olympus Pen F and Olympus prime lenses.)

Finally, most of the photos in my archive are available for editorial use or self fulfillment as prints. If you see something you'd like to use or just hang on the wall, click on the "Add to Cart" button and follow the onscreen prompts.
Posted by Jack at 21:54