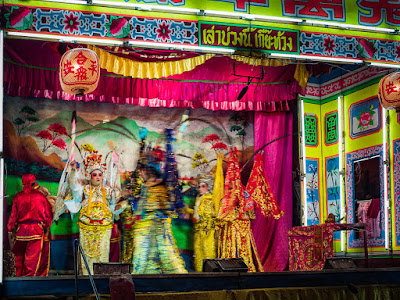 Performers on stage during an opera performance in Khlong Toey. It was a special performance to mark the Lunar New Year.

When I moved to Thailand in 2012, one of the things on my "Thai Bucket List" was to photograph a Chinese Opera, called "Ngiew" in Thailand. I can scratch Chinese Opera off the bucket list. I think I've photographed more than 15 operas in the nearly five years I've been here.

The time around the Lunar New Year and the Vegetarian Festival (usually in September) are peak opera times. You could photograph a different opera every night during the holidays and not repeat yourself. 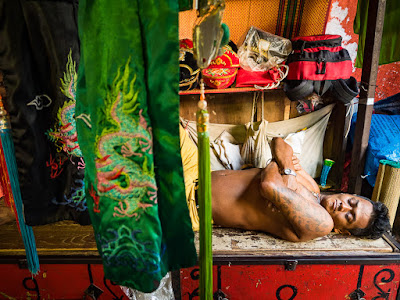 Early in the afternoon, a performer naps before getting into character.

At other times of the year, it's very hit or miss. Operas are performed at Chinese temples and shrines but knowing when and where operas are staged is hard to figure out. I don't read Thai or Chinese, but I've become adept in spotting the signs of an opera and most of the operas I've photographed I've stumbled upon while out photographing other things. 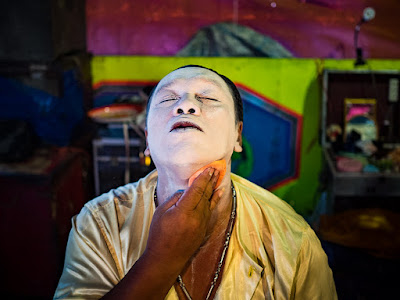 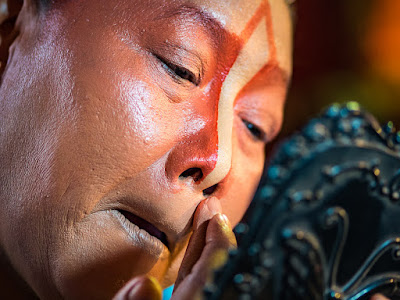 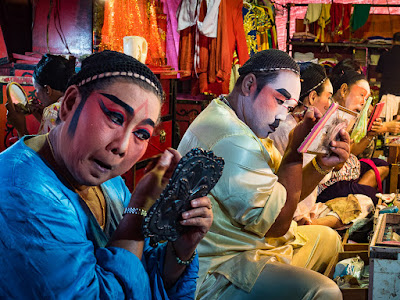 Performers put on their makeup before the performance.

This year, since the death of Bhumibol Adulyadej, the King of Thailand, the kingdom's revered Monarch, the opera schedule has been somewhat curtailed. In the week's following the King's death, public performances of any sort, including Chinese operas, were cancelled.

Thais are still mourning, but in the last six weeks or so public performance are beginning again but they haven't resumed a full schedule. I went out looking for an opera before Tet and the shrines I visited, ones that usually host an opera, told me they cancelled this year out of respect for the King. 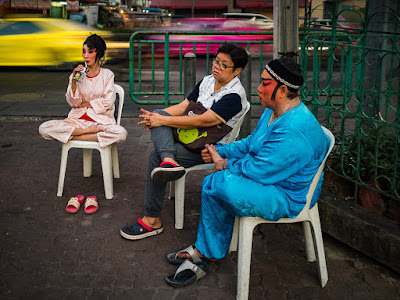 Performers sit backstage in the evening before the start of the performance.

There is a small shrine that hosts a couple of operas a year near Khlong Toey market. My wife walks by the shrine every day on her way to work (she teaches at a school in the neighborhood) and saw them putting together the stage at the shrine, so the next day I went to photograph the opera there. 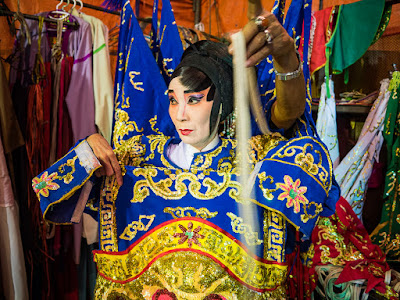 A worker helps a performer get into her costume before the opera.

It was a "command performance" of sorts, a special three night run for the shrine's elite members. There was seating for almost 150 people, about 10 tables, with linen table cloths and attended to by wait staff in long sleeve shirts and vests, set up for the spectators. Usually, spectators at an opera buy food from roving noodle vendors and sit on plastic chairs, so this was a formal affair. Given the ornate nature of the setup, I was very surprised when only 10 or 12 people showed up. 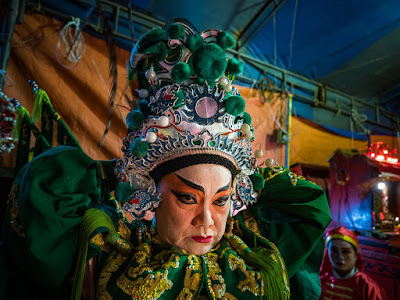 A performer waits in the wings to go on stage.

The small crowd didn't seem to discourage the performers though. A musician banged a gong a few seconds before 7 and sharply at 7 performers took the stage and put on a spirited performance. 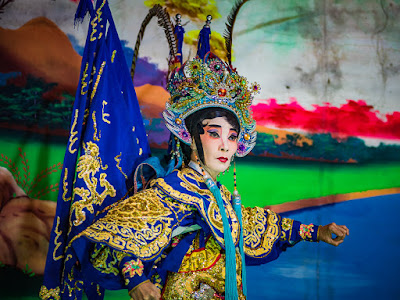 A performer on stage.

There are many more photos of the 2017 Lunar New Year and Chinese Opera in my archive.