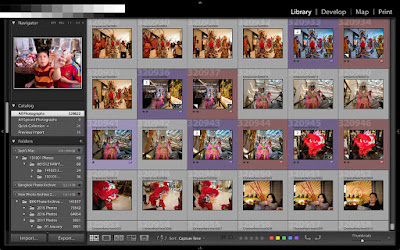 The main window of my Lightroom archive.

I lost a hard drive recently. The 4 terabyte drive that holds my recent work stopped powering up. I'm pretty sure it's a problem related to the drive's internal power supply because I tried swapping out the power cables that came with the drive on nothing brought it back. I have a zero tolerance policy when it comes to flaky hard drives. A drive that gives me problems is immediately taken out of service. My data is too important to me, I won't play Russian Roulette with a hard drive.

There are two kinds of computer users. Those who have had hard drive fail. And those who will have a hard drive fail. Even before this episode I was in the former group. I've had four or five hard drives fail through the years. The remarkable thing about is that this was the first hard drive failure I've had in years, since moving to Thailand.

We don't have a bank safe deposit box in Bangkok, so I keep two copies of my drives in our apartment. That's a failure point I worry about all the time. My photo archive data drives have all of my photos. I also keep a much smaller selection of processed files in my PhotoShelter archive. That's my backup of last resort.

A lot of people use "cloud" backup, like Crashplan. If we lived in the US, I would consider something like Crashplan, or backup all my raw files to my PhotoShelter archive. One of the challenges of living in Thailand is that internet speeds here are much slower than they were in the US and I'm not comfortable backing up to the cloud from Thailand.

Because I'm so obsessive about backing up my data, when my hard drive failed I didn't throw up my arms in despair. I went to a local electronics mall, bought a new 4tb drive, brought it home, and reformatted it (it came formatted for a Windows computer and I use Macs).

The whole ordeal took about 24 hours, but it was spread over three days. I didn't lose any photos, more than anything it was an inconvenience. The lesson to be learned here is backup your work. And when you've backed it up, back it up again.