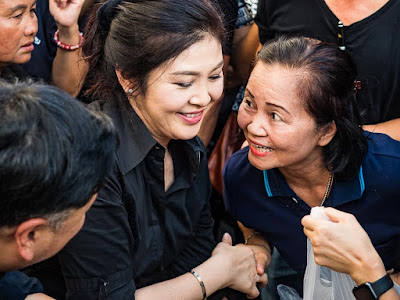 A woman (right) thanks former Thai Prime Minister Yingluck Shinawatra for selling rice directly to urban consumers during an event at a mall in a Bangkok suburb.

Yingluck Shinawatra has been in the news in Thailand a lot lately. She's still on trial for alleged mismanagement of a rice price support scheme she authorized during her time as Prime Minister (she was deposed by a military coup in 2014). She's also reaching out to Thais by selling rice directly to consumers during a series of events at Bangkok malls.

Thai rice farmers are being buffeted by falling prices. The rice farmers were dealing with similar issues in 2011 and 2012 when Yingluck, as Prime Minister, started her "rice pledging scheme." Farmers benefitted but it was beset by problems related to corruption and the government was stuck with a huge stockpile of rice it couldn't sell. The program ended up costing the Thai government billions of dollars. 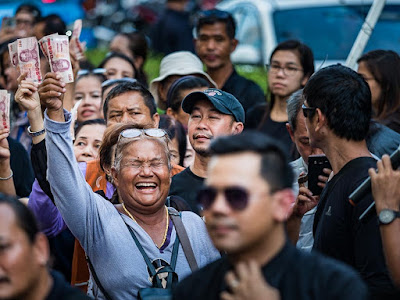 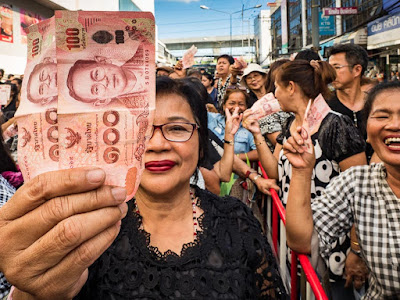 People hold up 100Baht notes while they wait for the rice sale to start.

Move the clock forward a few years. Yingluck is in court for her rice pledging scheme and Thai rice farmers are, again, in crisis because prices are falling. The military backed government has announced a couple of plans to prop up rice prices. (Including sending soldiers to rice warehouses and mills to "encourage" buyers to give farmers better prices.) Yingluck, who has maintained a lower public profile since the coup and her legal problems began, decided to dip her toes back into the waters of public life.

Yingluck (or her associates) goes into the countryside to buy rice. They truck it into the city and sell it to consumers at the same price they paid for it. So far she's held two of these rice sales. Both sold out in hours.

I didn't go to the first one, but the second one, held in Samut Prakan, a suburb a few kilometers from our apartment, attracted thousands of people. There were 10 or 12 pickup trucks loaded to overflowing with rice. When Yingluck arrived, the crowd burst out in applause.

Yingluck is being watched by government security services and politicking is banned right now in Thailand, which is in mourning for the late King and and in the very early stages of a transition from military rule to civilian rule. She's being very careful not to say anything. She didn't make any speeches (she did talk to reporters afterwards). She didn't have a microphone or make any sort of public statement. She talked quietly and joked with supporters. 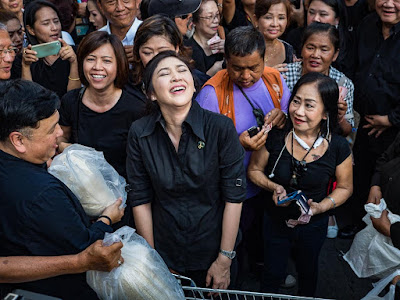 Yingluck laughs at a joke made by someone buying rice from her.

I didn't know what to expect when I went to her rice sale. I was expecting a crowd, Yingluck is still very popular personally and events like this always draw big crowds, regardless of its sponsorship. Still, I was surprised at how big the crowd was. 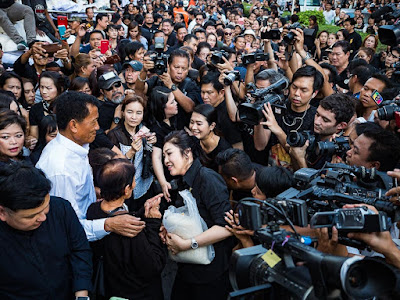 Yingluck, in the lower center of the photo, surrounded by media and the public. Most people were wearing black out of respect for the late King.

Yingluck sold a few sacks of rice from each truck to waiting consumers. As she moved from truck to truck, her assistants stepped in to finish selling the rice. By the end of the event, all of the rice was sold. 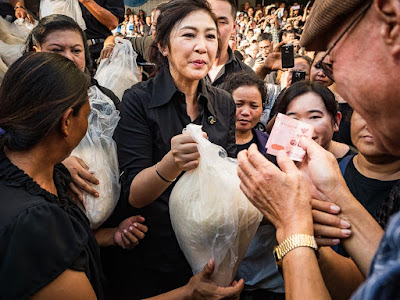 She sells a sack of rice to a man.

The government has chosen not to respond to Yingluck's rice sales. It's a complicated situation. On one hand, she's not allowed to politick and these events are not overtly political. On the other hand, it's clear that she's still very popular personally and these events are raising her profile. 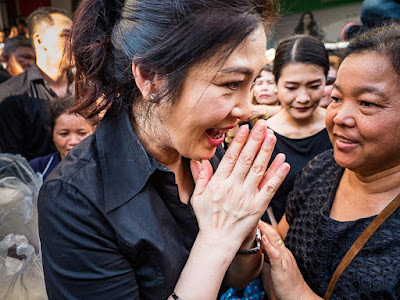 She greets people as she walks through the crowd. 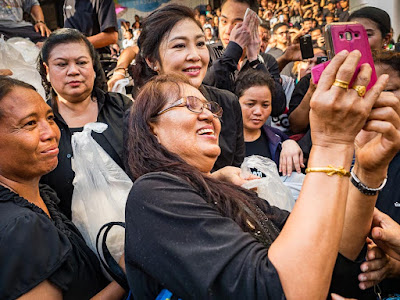 And poses for selfies with them.

I hope to get out to the rice fields in the next couple of weeks to photograph rice farmers, who are busy harvesting a crop that they can't sell.
Posted by Jack at 10:30