Waiting to See the King's Urn 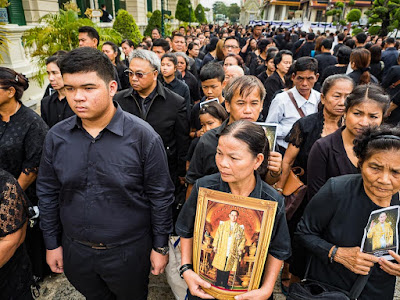 Thousands of people stand in line on the Palace grounds waiting to view the funeral urn of the late Bhumibol Adulyadej, King of Thailand.

Thailand's mourning for the late King continues. The mourning period will be a year. Thais are expected to wear black when they go out in public. Foreigners who live in Thailand are encouraged to wear black to show respect for the Monarchy and Thais appreciate it if tourists wear black, or at least subdued colors.

Earlier today, the King's funeral urn was put on display. This is similar to lying in state. In Thai tradition, the King's body is stood up in the urn, which is then cremated. King Bhumibol, a thoroughly modern monarch, is breaking with the tradition. The King is in a coffin in the palace while his urn contains some strands of his hair and is more representational than literal. 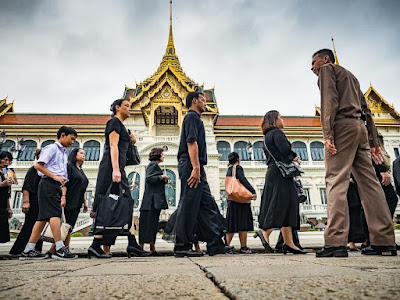 A member of the Royal Household, the quasi government agency that oversees matters related to the Palace, watches mourners file into the throne hall to pay homage to the King's urn.

The government made an elaborate plan that was supposed to allow up to 10,000 people per day see the urn. On Saturday, the first day the urn went on view, well over 10,000 people got in line. By the middle of the morning, the government scrapped the queuing / ticket system and said anyone in line would be able to view the urn. By the end of the day Saturday, nearly 20,000 people reportedly viewed the urn. 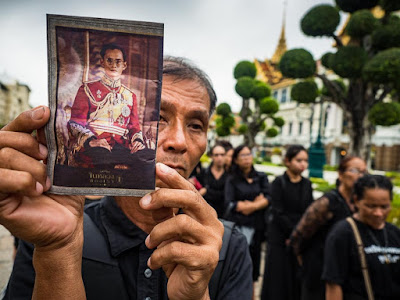 A man waiting to see the urn holds up a photo of His Majesty. 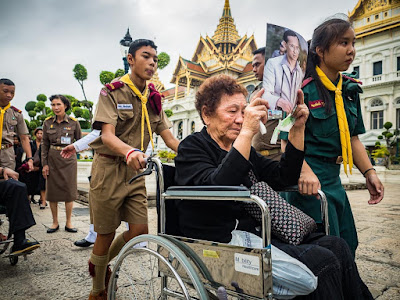 A Boy Scout pushes a woman in a wheelchair into the Throne Hall so she can pay homage to the King's urn.

The media is not allowed into the throne hall to photograph people paying homage to the King's urn. We are allowed onto the Palace grounds to photograph mourners, but to do so we have to be properly attired. Men have to wear black slacks, black suit coat, white or black shirt, black tie and black mourning arm band. Women have to wear black long dress or skirt and a black long sleeved blouse or a black formal Thai woman's outfit. This is not negotiable. If you are not properly attired you can not photograph on the Palace grounds. 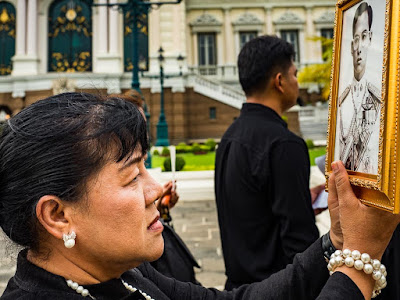 A woman carrying a photo of the late King walks towards the Throne Hall.

The initial shock of the King's death has passed and Thais have gone into deeply sad reverential mourning for the Monarch they loved and the only Monarch most Thais have ever known. I think it will be like this for first 50 days after His Majesty's death. 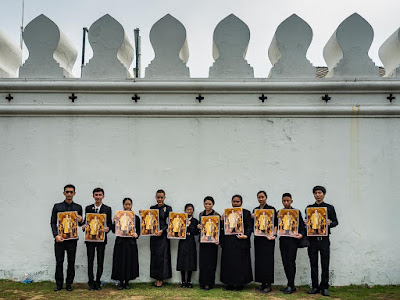 People who paid homage to the King's urn pose for a photo in front of the Palace walls after they left the Palace grounds.

There are more photos of mourning for the King in my archive.
Posted by Jack at 11:00