Tearing Down the Houses 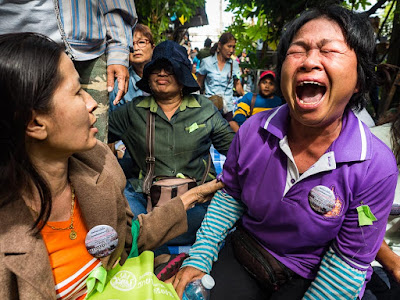 A woman screams as Bangkok city officials and police enter the Pom Mahakan slum to start tearing down homes.

Evictions were supposed to start in the Pom Mahakan community Saturday. I went down to the old fort early in the morning and found that all of the entrances to the fort were barricaded. I've been visiting the fort for about five months and many of the people in the community recognize me. I walked past one of the barricades and a person called to me, moved the barricade aside and invited me into the fort. 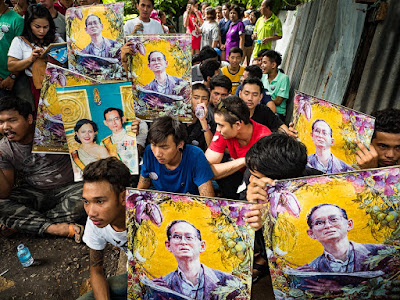 Residents of the fort and their allies from other Bangkok slums hold pictures of the King and block the sidewalks in the fort. They wanted to make it impossible for city officials to walk through the community and tag homes for demolition.

The situation in the fort is complicated. Many of the families moved into the fort in the mid 1800s. They've been in the fort for generations. They were "squatters" when they moved in, then the Thai military gave them permission to stay but when the military ceded the land to the city of Bangkok in the middle of the 20th century, the city did not extend the families' right to stay so they became "squatters" again. 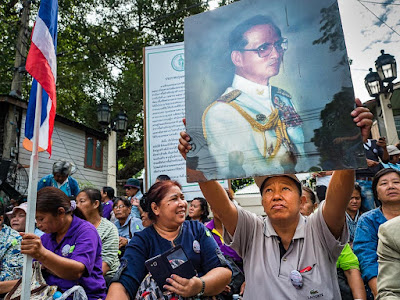 Residents with portraits of the King blockade on the entrances to the fort.

In the late 20th century the city proposed evicting everyone from the fort and turning it into a public park. The residents fought the plan and took the city to court. The courts ruled against them but the city never moved forward with the eviction plans. Some of the residents accepted buyout money from the city but didn't leave. Others left, but new families moved in as the old homes were vacated.

Fast forward to 2016 and the city again stated plans to evict the residents and move ahead with plans to create a park. The residents renewed their opposition to the eviction. City officials put up eviction notices a couple of times and the residents ignored them.

The residents went on a charm offensive of their own. They started a very active social media campaign, sought coverage in the Thai and English language media, and turned the community into a self described "living history museum." 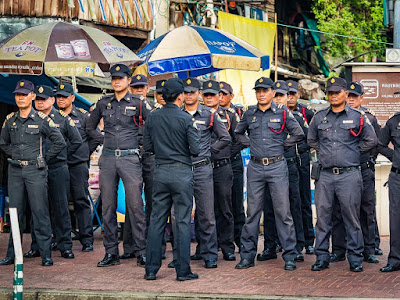 Bangkok code enforcement officers are briefed by supervisors before the eviction operation. They wear police like uniforms but are not police officers. They enforce city codes (like jaywalking, littering etc).

The community's efforts were successful. Public sentiment turned in their favor but the city showed no interest in backing down and still threatened to forcibly evict people. The new deadline was today, Sept. 3.

I went to the fort not knowing what to expect. When I got there, most of the Thai media was set up on the street in front of the fort, because the residents did not want them in the fort. I was invited in.

(I go down to the fort a couple of times a week. I don't photograph every time I go, but I always chat with people and when I do photograph I share the pictures, either Fuji Instax prints or prints I get made at a local camera shop, so people in the fort know me. This definitely helps me get access to the community when other journalists can't.) 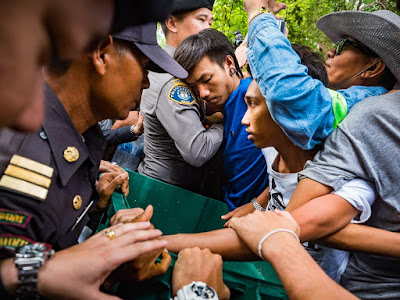 Residents of the fort (on the right) tussle with police and city workers when the city broke into the fort through a wall along the canal behind the fort. 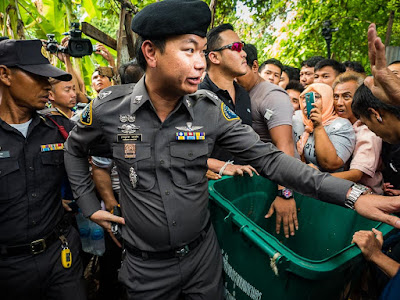 A police officer leads the way into the fort. This was the most tense part of the morning. There were only a few police officers and they were not in riot gear, but it would have been easy for things to get out of hand at this point.

The police and city workers burst through a tin wall at the back of the fort and some of the young men from the community confronted them. There was some pushing and shoving by both sides. As they tussled, residents of the fort moved into position behind the young men and sat on the ground (second photo).

The sidewalks in the fort are very narrow and there were hundreds of people. When the pushing and shoving ended, police were faced with a sea of faces that they could not get through. There was a brief stand off then both sides sat down to negotiate an ending. 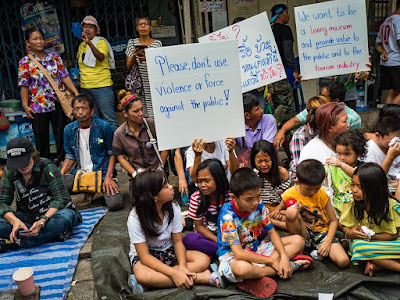 Residents block a sidewalk in the community. 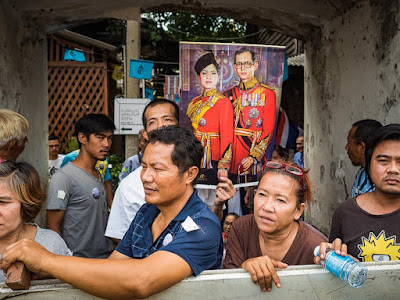 Residents block one of the entrances to the community. 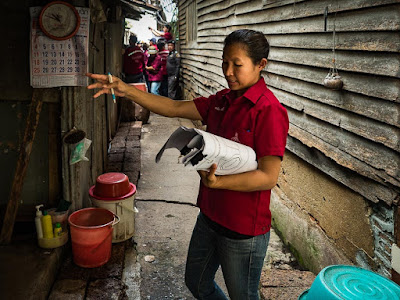 A city worker identifies a home for demolition. 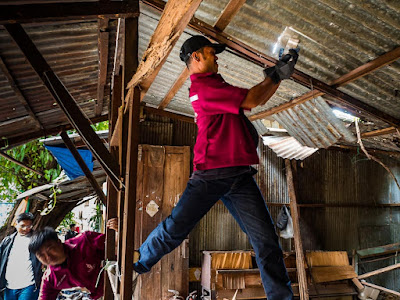 City workers tear down an abandoned home. The home was so decrepit they didn't even need hammers - they simply pulled it apart. 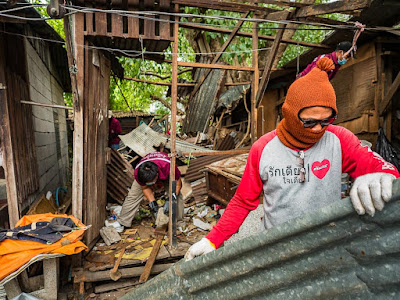 The roof of the home was corrugated tin. They saved as much of the building materials as they could. 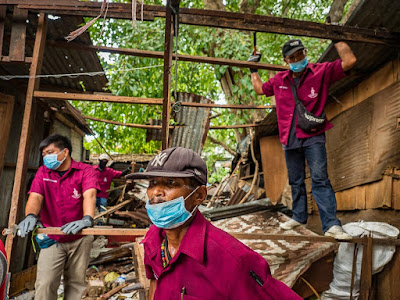 When residents raised concern that workers were taking houses they weren't supposed to, workers stopped the demolition until their supervisors could negotiate permission to continue.

The question now is what happens to the 44 families who were not evicted today. The city said they still intend to move people out and make a park on the site, but they also said people could stay for the time being. Families now live with the uncertainty of not knowing what the city will do, but it's a better outcome than it could have been. 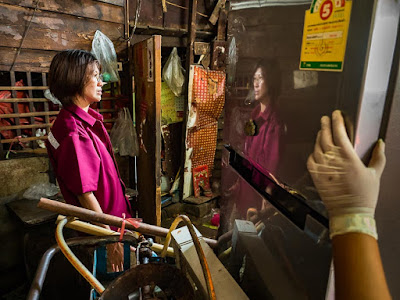 City workers pack out a resident they evicted. The family in the house reportedly accepted a buyout years ago, but then tried to stay. City workers packed their belongings and took the boxes to a waiting truck. 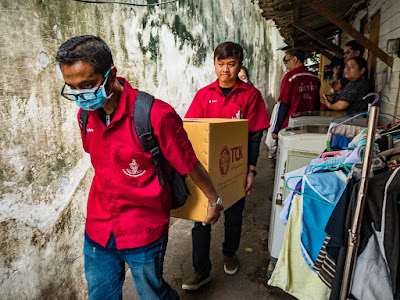 There are more photos from the eviction and Pom Mahakan in my archive.

Finally, most of the photos in my archive are available for editorial use or self fulfillment as prints. If you see something you'd like to use or just hang on the wall, click on the "Add to Cart" button and follow the onscreen prompts.
Posted by Jack at 10:00