Bringing in the Rice 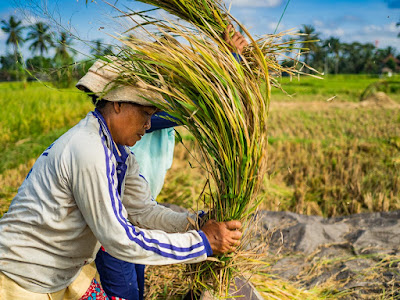 A woman threshes rice during the harvest in Bali.

Rice is a staple for people in most of the world. In Bali, rice is not only a food staple but also an integral part of life. Life is built around the cultivation of rice. There are rice fields everywhere on Bali, even in the middle of cities, in what would be an empty lot anywhere else.

In most countries in Asia, rice grows on a predictable schedule. There is a planting season (which, coincidently, is right now in Thailand and Cambodia), a transplanting time (when baby rice plants are gathered and replanted in paddies), and a harvest season (usually starting in October in Thailand). On Bali, which has diverse micro-climates and a millennium old water distribution system based on community knowledge, rice grows year round. Rice is planted in one paddy while it's harvested from another paddy, which could be right next to the paddy where it's being planted. 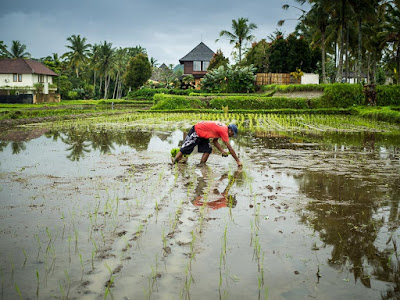 A man transplants rice in a paddy just a couple of kilometers from where the rice was being harvested. A new, and expensive, home for a foreign family is behind the paddy.

For a photographer, this is a great thing. I could photograph rice being planted and harvested on the same day. That's not something I can do in Thailand.

On Bali, rice cultivation is still an old school activity. Some farmers are starting to use small tractors to prepare rice fields for planting, but after that the work is done by hand. 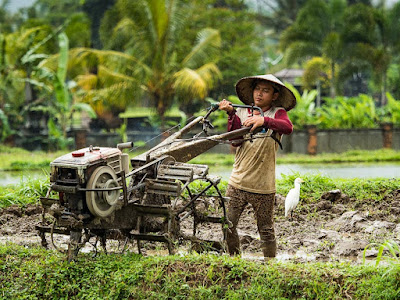 A rice worker moves his small tractor to another paddy while prepping the paddies for planting.

In Thailand, at least on the big rice farms in central Thailand, most of the work is mechanized. 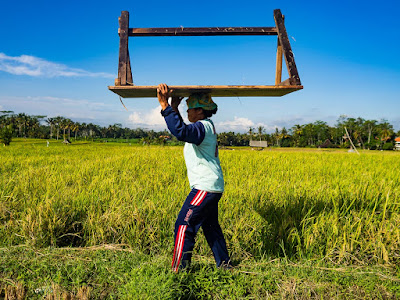 A woman carries a threshing table out to a rice field near Ubud... 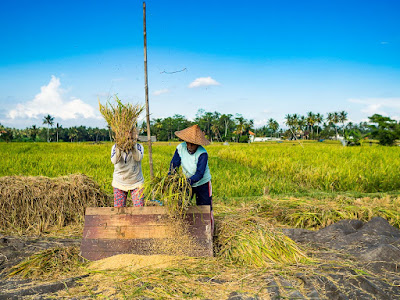 ...The rice was cut by hand and then the women threshed it by pounding it against the table (a process called "banging" in Indonesian).

I enjoy photographing workers in the rice fields, but it's not something I could ever do. It's back breakingly hard work done under a grueling sun. 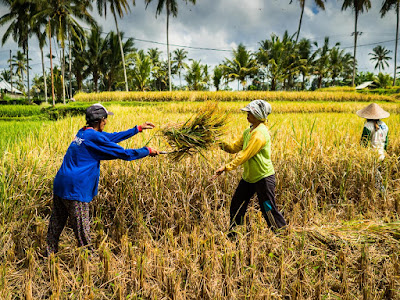 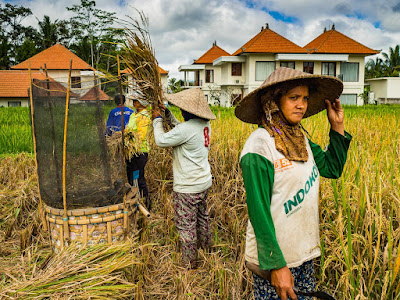 In the same field, workers harvest rice in front of a development of new homes built for foreign tourists and retirees who want to live in a rice field. This is the biggest threat to Bali's rice growing traditions. The real estate boom in Ubud is fueled by Americans, Australians and Europeans who want to live in the midst of Balinese rice fields. It's the "Eat Pray Love" effect, an unintended consequence of Elizabeth Gilbert's best seller.

There are more photos of Balinese rice cultivation in my archive.
Rice Harvest in Bali - Images by Jack Kurtz