The Slow Life on Don Khone 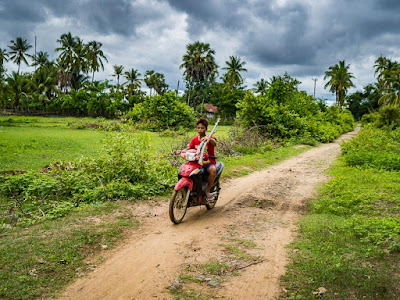 A man rides his motorcycle into town from the rice paddies in the center of Don Khone island (also spelled Khon). None of the roads on the island are paved.

I spent a fair amount of time exploring Don Khone while I was photographing the fishermen on the island. It's the southernmost point in Laos, as far as you can get from Vientiane and still be in Laos. Most of the people on the island either work as farmers or fishermen (or both). 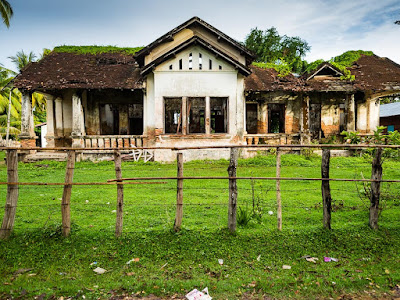 The old elementary school in the main town on Don Khone. There are a couple of small villages on the island, one on the north end (where this school is) and another on the south end. The villages are connected by a dirt track that used to be a railroad track.

South of Don Khone is the Mekong River and Cambodia. The island has become a backpacker / travel hotspot. The north end of the island, closest to mainland Laos, is dotted with hotels, bungalows, and restaurants. Tourism has sparked the local economy in a huge way. 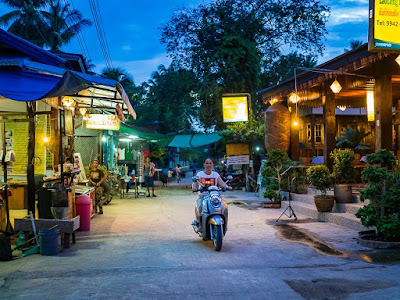 The travel revolution hasn't changed Don Khone as much as it has some parts of Laos, like Luang Prabang, but the island has been transformed. Riverside properties are being turned into hotels and restaurants. People who have lived in the center of the town are selling their homes and moving out of town, into the countryside, and the in town property being built into a tourist oriented businesses. 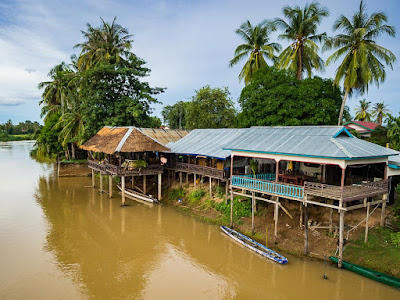 Restaurants and guesthouses and hotels line the river.

You can walk through rice fields in the center of the island, but they only grow one rice crop per year on the island (many parts of Laos grow two rice crops per year, some parts of Thailand grow three crops per year). There's nothing going on in the fields when the farmers aren't working. So there's nothing going on in the fields about 45 weeks of the year.

You can rent a bike or motorcycle to get around the island. Renting a bike is out for me because it's almost impossible to carry my camera bag and pedal a bike. I rented a motorcycle one day (helmets not available) and drove off the road three times in the short ride to the waterfalls on the east side of the island. The roads, (there are four roads on the island) are all unpaved. When it rains, they become mudslicked, puddle riddled, paths. Let's call it an adventure. 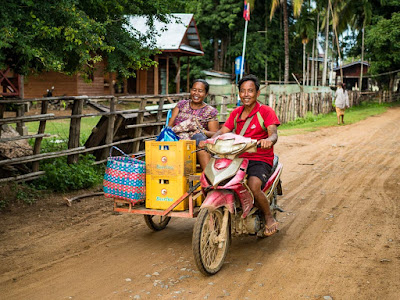 A local woman uses a tuk-tuk to get home. Tuk-tuks on Don Khone are motorcycles with a sort of sidecar attached. Two normal sized Europeans, or four Lao people, can uncomfortably fit into the sidecar. The tuk-tuks, like electricity, are new to Don Khone. The tuk-tuks came about four years ago.

After my disastrous trip on the motorcycle, I ended up hiring a tuk-tuk and driver for my out of town excursions. It was marginally safer and a bit more comfortable than driving myself on the moto. 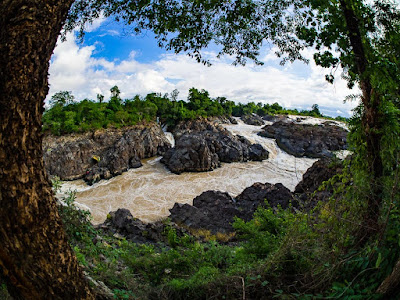 This is why people come to Don Khone. Nature. These are the waterfalls on the west side of the island.

Lots of tourists come to Don Khone, they visit the waterfalls, walk out to the rice fields, maybe go to the dolphin watching area on the south end of the island. Then they kick back in a hammock (almost every bungalow comes with a hammock on the porch) open a Beer Lao and watch the world go by. It ain't a bad way to spend a vacation. 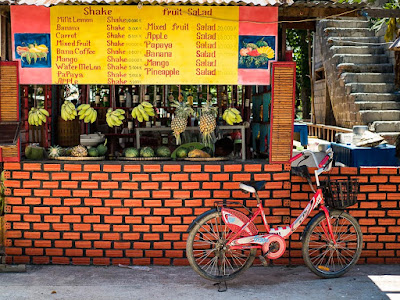 Not a traditional Don Khone scene. A bike parked at a fruit shake stand on Don Khone. The pineapple shakes are especially refreshing. 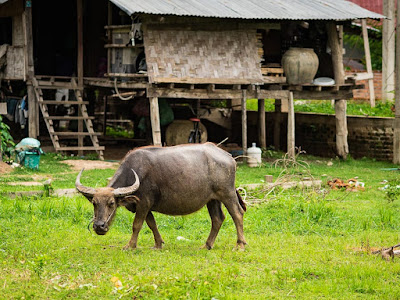 A more traditional Don Khone scene. A water buffalo grazing in front of a home. Water buffalo and oxen are still used as beasts of burden on Don Khone.

Laos used to be a French colony. The French came in the later half of the 1800s, following the Mekong from its mouth in southern Vietnam, through Cambodia. They were looking for a short cut to China and to counter England's expansion of its colonial empire in Burma and Malaya.

The Mekong River fluctuates widely from dry season to rainy season, but is generally navigable all the way from the Mekong Delta in Vietnam to Don Khone. The waterfalls at Don Khone make it impossible to get a boat past the island. It's only a few kilometers before the river becomes navigable again but it's a hard, full stop at Don Khone. The French tried, unsuccessfully, to get boats up or around the waterfalls and finally settled on building a train across Don Khone.

In the late 1890s they built a port on the south end of Don Khone, another port on the north end of Don Khone (in the main village on the island) and connected them with a narrow gauge railroad. They brought boats up the river, disassembled them on the south end of the island, hauled them across Don Khone, reassembled them on the north side of the island and eventually had a fleet on the lower Mekong (Cambodia and Vietnam) and a second fleet on the middle Mekong (Laos).

The railroad worked well for a few years and was eventually expanded with a bridge across the river to the island of Don Det (just a few hundred meters north of Don Khone). At the same time, French colonial authorities built Highway 13 from the north of Laos to the Cambodian border and eventually the highway replaced the Don Khone railroad as the main way around the waterfalls and the railroad fell on hard times. World War 2 put a nail in the railroad's coffin and it was never put back in use. 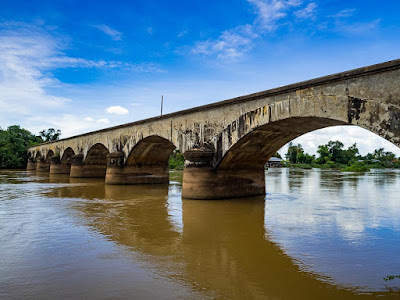 The railroad bridge connecting Don Khone to Don Det is still in use for motorcycles, bicycles and walkers.

Even though tourism is changing Don Khone, there are still a lot of opportunities to see traditional Lao life. 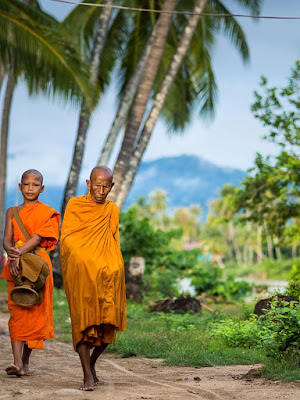 Monks on the tak bat. 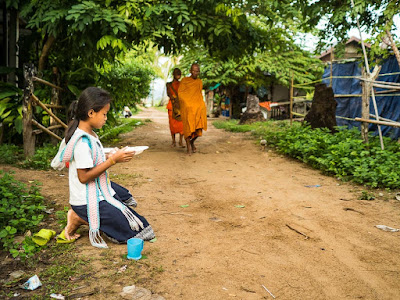 Girls wait for monks to come to their home during the tak bat.

There are more photos of Don Khone in my archive or available from ZUMA Press.
Life on Don Khone - Images by Jack Kurtz