A Funeral in Laos 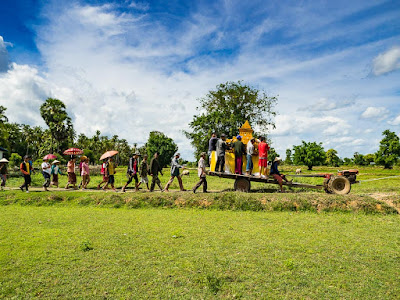 A funeral procession goes through the fields on Don Khon, in the 4,000 Islands archipelago in the Mekong River, Laos.

I had a chance to photograph a funeral while I was in Don Khon. I noticed some people setting up tents and food tables when I walked through the town very early in the morning and made a note to go back and check it out later in the day.

I went back at lunch time and a Danish gentleman who lives on the island said there was going to be a funeral for one of the community's more important members. He owned a guest house and restaurant and was the island's "electrician," which means he had a government appointed job to collect the monthly electric bills from the island's residents.

One of the things I love about being a photojournalist is that I get to see how people live. I went to the man's home and introduced myself to his family. They invited me, no encouraged me, to stay and photograph the service. One of his daughters said I should accompany the funeral procession out to the rice fields for the cremation. 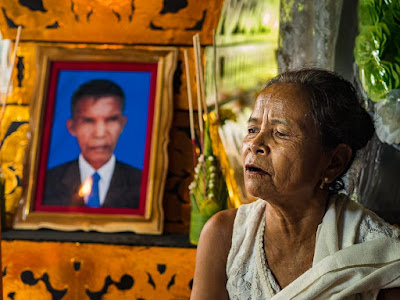 The widow sits at the head of the coffin.

There were hundreds of people at the funeral and tens of people packed into the family home. Most of the mourners in the home were women. Men gathered under the tents in front of the home. There were 10-12 Buddhist monks jammed into the home, an indication of how highly regarded the deceased was, normally only three or four monks attend a funeral. 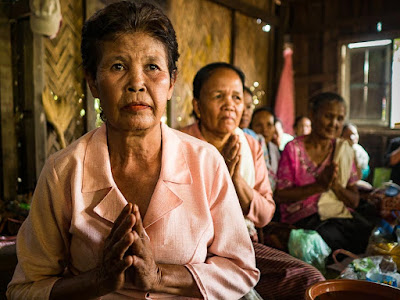 Mourners during the service in the home.

The monks led a short chanting service, well under an hour, and then the coffin was brought out of the home. 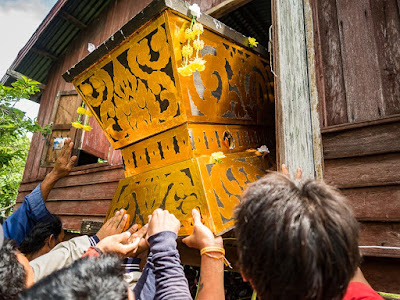 The coffin being brought out of the home.

I was not only allowed to photograph the entire service, but encouraged to. I worked with my regular Olympus digital cameras, and then whenever I had a chance to, I made pictures of the service with my Fuji Instax instant camera. As the Instax spit out its credit card sized photos I gave them to the family members, most of whom wore white, the Buddhist color of mourning.

I've found that the Instax camera is a great way to make friends. People seem to genuinely appreciate getting the little prints. 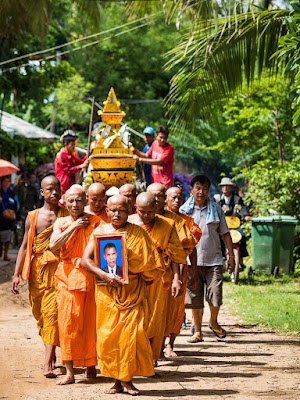 The funeral procession, led by monks, goes through town.

In Thai Buddhism, people are cremated in crematoriums, either at a temple or adjacent to one. But in the tradition for this part of Laos, the deceased are cremated at a spot that was important to them. It might be a favorite rice field, or some other spot the deceased was especially fond of. One of the deceased daughter's told me they were going to go about a kilometer out to the jungle for the cremation.

The one kilometer turned out to be a wild underestimate. We walked for over an hour under a blistering tropical sun (the deceased rode on a local tractor, but most of the monks and family members walked). When we got to the spot in the jungle, the daughter came to me and sort of chuckled and said it was a "Lao kilometer."

Men took the coffin from the tractor to a waiting pyre. They reassembled the coffin (which, when fully assembled is more than six feet tall) atop the pyre. People posed for pictures around the coffin, while I photographed with the Instax and gave away prints. The monks said a short prayer and people lined up and placed kindling and firewood around the coffin. 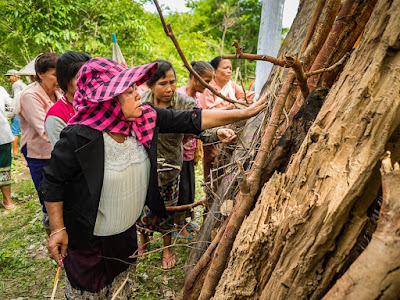 People stack kindling and firewood around the coffin... 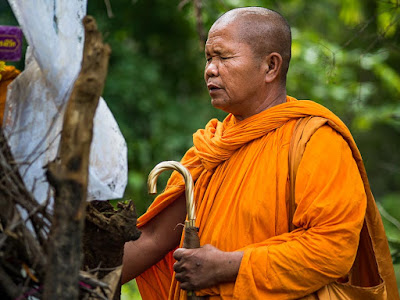 While a monk prays. 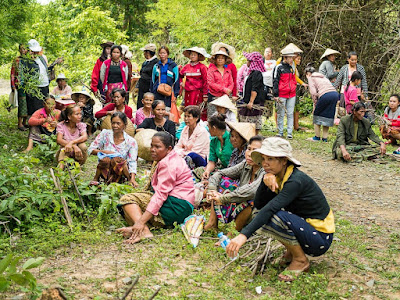 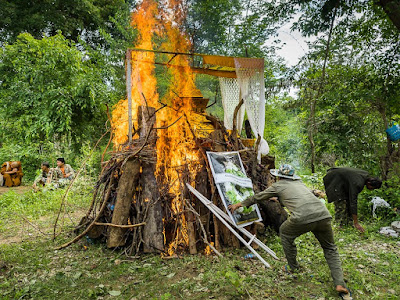 The cremation. The coffin is buried under the firewood.

When I'm in the countryside I work on access to events like this on a case by case basis. If it's a wedding or an ordination - a happy event - I'll walk up to someone directly and ask if I can photograph. Even if no one speaks English, I've always been able to make myself understood.

If it's a funeral, I wait discretely to the side until someone invites me in. I will sometimes seek out an English speaker. Occasionally, I'll use the translation app on my iPhone to explain what I'd like to do (Lao and Thai are close enough that Lao speakers understand the Thai translations from my phone, especially in the parts of Laos close to the Thai border). In this case, several members of the man's family spoke English and were more than happy to have me photograph the cremation.

Finally, most of the photos in my archive are available for editorial use or self fulfillment as prints. If you see something you'd like to use or just hang on the wall, click on the "Add to Cart" button and follow the onscreen prompts.
Posted by Jack at 08:29