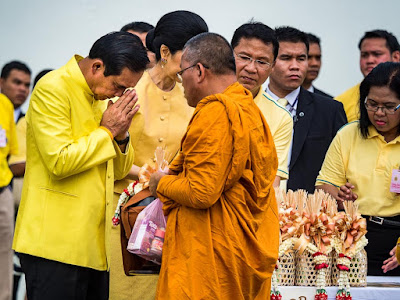 Gen Prayut Chan-o-cha, the Prime Minister of Thailand, bows his head while giving alms to a monk at a special ceremony honoring Bhumibol Adulyadej, the King of Thailand, Thursday. The ceremony marked the King's 70 year reign. He is Thailand's longest reigning monarch and the longest reigning monarch in the world today. (Olympus 40-150mm f2.8 w/ 1.4X teleconverter = 210mm, or 420mm in full frame terms)

There was a special merit making ceremony for the King at the Grand Palace and Wat Phra Kaew (which is in the palace grounds) Thursday to honor the start of the King's 70th year as monarch.

More than 700 monks participated in a special chanting service in the temple. Thai government and business leaders lined the streets around the palace and silently dropped alms into the monks' bowls as the monks filed into the palace (and temple) grounds. 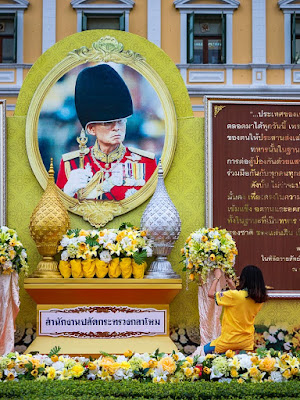 I went down to the palace to cover the merit making. Normally when I photograph here I use Olympus' excellent (and tiny) prime lenses. On events though where our mobility is limited, like this one, I haul out my Olympus zooms (photographers who photographed the Prime Minister were restricted to a small area across the street from his location). The 12-40 f2.8, 40-150 f2.8 and the tiny 1.4X teleconverter for the telephoto zoom.

I work with the 12-40 on one OM-D E-M5 Mark II body and the 40-150 with the 1.4X teleconverter on the other body. This gives me the ability to tremendously change my framing without moving or changing lenses. 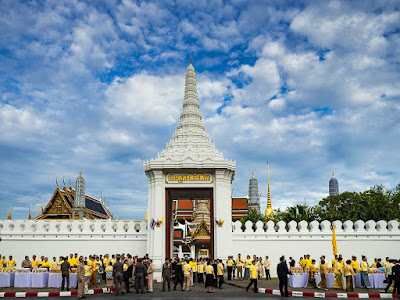 People get ready for the alms giving in front of Wat Phra Kaew. This was made at more or less the same spot where I photographed PM Prayut. (12-40mm zoom at 13mm = 26mm on full frame)

We couldn't move once the Prime Minister arrived and the ceremony started. With the 40-150 and teleconverter I was able to photograph him giving alms to the monks and from the same position make a variety of photographs of monks filing into the palace grounds and people making merit. 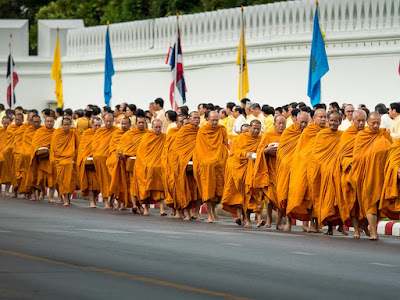 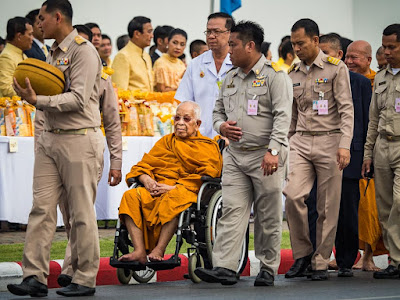 Turn to the right, and the acting Supreme Patriarch, the highest ranking monk in Thai Buddhism, is escorted into the ceremony. (Also 40-150mm w/ 1.4X teleconverter = 210mm, 420mm on full frame)

When the politicians and business leaders left we had more freedom to move. I crossed the street to the Palace gate and, still using two cameras, photographed monks walking into the ceremony. 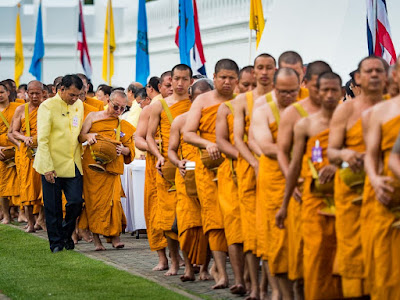 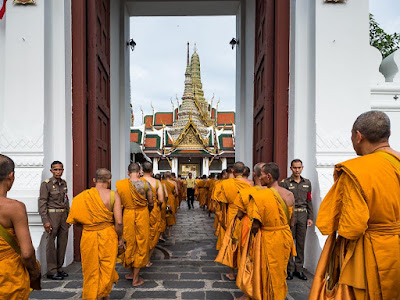 From the same position, monks walk through the palace gate, the spires are Wat Phra Kaew, the Temple of the Emerald Buddha. (12-40mm zoom at 12mm = 24mm on full frame)

When all the monks went into Wat Phra Kaew I walked over to Sanam Luang, the large parade ground across the street from the palace. The government set up a viewing area so regular Thais could watch the ceremony, which simulcast on Thai TV. (The ceremony in the palace was in a very small space and open only to very high ranking government leaders and select business leaders.) 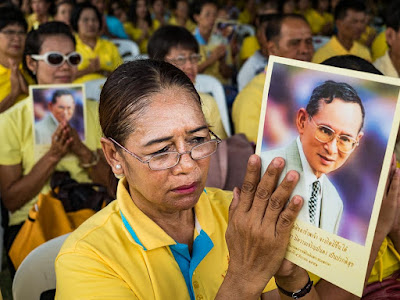 People at Sanam Luang hold pictures of the King and pray during the ceremony. (12-40mm zoom at 23mm = 46mm on full frame)

The longest Olympus prime lens I have is the 75mm f1.8. It's an excellent lens, probably the sharpest Olympus lens I own (I think it's better than Canon's legendary 135mm f2 L lens). It works for about 90% of my telephoto needs but it's just not long enough for events like Thursday's merit making. The Olympus 40-150 and its companion teleconverter gives me tremendous reach (like a 420mm f4 in full frame terms) in a package about the size of Canon or Nikon's 70-200 f4 zooms. But relative to M4:3 it's a huge lens, so I only break it out when I know I need the extra reach.

I normally use the Olympus primes on the street because I love the super shallow depth of field I get with a f1.8 or f2 lens. It's only a little faster than the f2.8 zoom, but when you're working in the dark confines of a market or temple every stop helps. The 12-40 is a fraction of the size of the 40-150 and about 1/3 the size of the competing Canon or Nikon lenses, but the Olympus primes are so much smaller that it's easier for me to carry a couple of tiny primes instead of one midsized zoom.

There are more photos from Thursday's ceremony in my archive or available from ZUMA Press.
Celebrating the King's 70 Year Reign - Images by Jack Kurtz
Finally, most of the photos in my archive are available for editorial use or self fulfillment as prints. If you see something you'd like to use or just hang on the wall, click on the "Add to Cart" button and follow the onscreen prompts.
Posted by Jack at 21:56