Say Goodnight to the Market 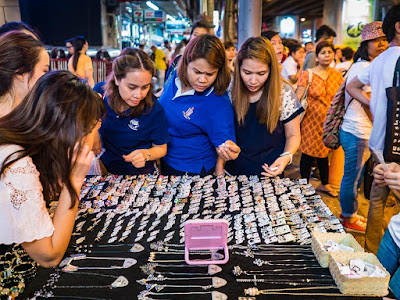 Women shop for bling at a stall in the Silom Road night market.

Since the coup in May 2014 that deposed the elected civilian government, Bangkok city government has gone on a binge of "cleaning up" city streets and closing the city's iconic street markets.

Usually when a street market is closed, the Bangkok Metropolitan Authority (BMA) makes an announcement that the market is closing in about a month. There's a flurry of meetings between impacted vendors and the BMA, the deadline is extended for a week or two, sometimes an extra month, then the market closes. So far every market targeted for closure has been shutdown.

The street markets are technically not legal. The vendors don't have permits to operate, they block the sidewalks, and sell pirated or bootlegged goods (you can get a $7,000 Panerai watch for $30, or a $200 pair of folding Ray Ban sunglasses for $5.) But they are a part of Bangkok's identity and history. The vendors pay "rent" to either property owners or local police so they can operate. (What they call rent might be called bribes or payoffs in some places.) 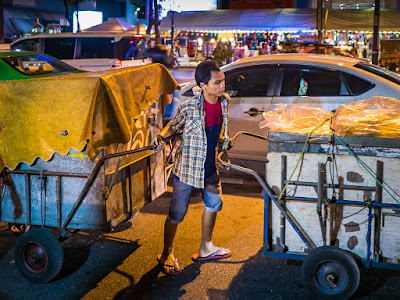 A vendor rolls his merchandise down Silom Road to his stall.

The vendors are not wealthy people, in some cases they're migrants from poor parts of rural Thailand, struggling to get by.

The markets are very organized. Vendors store their merchandise in rolling cabinets, bringing them out and setting up after sunset and putting them away (in rented spaces in nearby buildings) when the market closes, well after midnight. 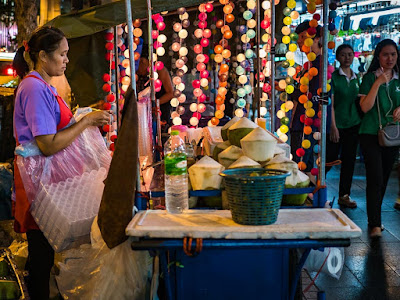 A woman sells coconut water from her rolling cart in the Silom night market.

I like the street markets. They're a part of Bangkok's chaotic life and they provide an economic lifeline to poor Thais. I know that they're not entirely legal (or even a little legal), but I wish that some sort of viable accommodation could be made for the vendors. 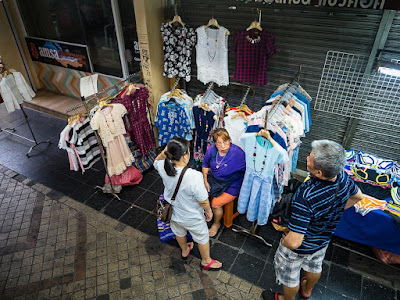 Clothing vendors on the sidewalk. 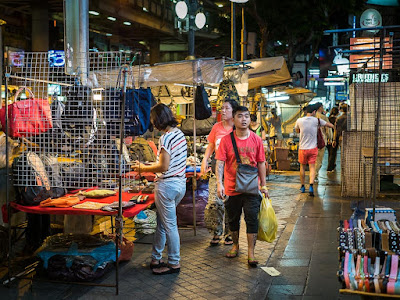 Tourists walk through the market.

There are more photos of the night market in my archive or available from ZUMA Press. 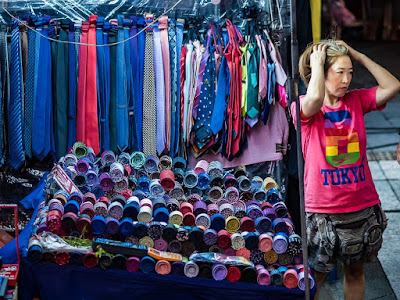 Finally, most of the photos in my archive are available for editorial use or self fulfillment as prints. If you see something you'd like to use or just hang on the wall, click on the "Add to Cart" button and follow the onscreen prompts.
Posted by Jack at 21:31 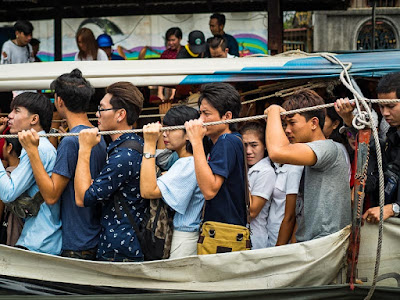 I went out today to photograph in Ramkhamhaeng area of Bangkok. I rode the Khlong Saen Saeb boat from Asoke Pier out to Wat Sriboonrueng. The boat is sometimes called a "water taxi" but that's not really an accurate description. It's more of a "water bus" since it plies a set route, and you don't call one to come get you. You ride it with hundreds of other Bangkok commuters. 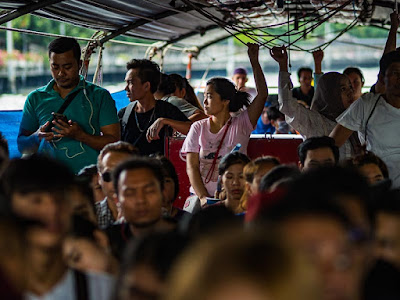 Passengers go into Bangkok on one the Khlong Saen Saeb boats.

Riding the boat is a pretty good way of seeing a different side of Bangkok. It's a much faster way of getting from Point A to Point B because it doesn't get stuck in traffic and it's cheap. My boat fare was 18Baht, about .52¢ (US) to go 11 kilometers (about 6.5 miles). It took the boat about 30 minutes to make the run. A taxi would have cost me about 180Baht ($5.20 US) and taken 45 minutes to an hour (thanks to Bangkok traffic).

The boat goes through Bangkok neighborhoods tourists don't normally visit and ends at Wat Sriboonrueng, an interesting temple that used to be on the outskirts of Bangkok but thanks to sprawl is very much in Bangkok. If you want to visit a shopping mall, you can hop off at the Bang Kapi Pier, where Bang Kapi Mall has a khlong side entrance. 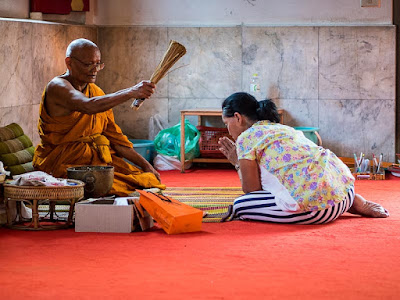 A monk blesses a woman at Wat Sriboonrueng.

The worst part of riding the boat is the getting on and off. The stops at the piers are very brief and you have to be ready to, quite literally, hop on and off the boat at the right time, sometimes while it's still moving. There are no doors or easy access to the boats. They pull up to the pier, passengers getting off pile out and then seconds later, passengers getting on hop on and crawl over and through the ropes hanging from the roof of the boat and try to find a seat. 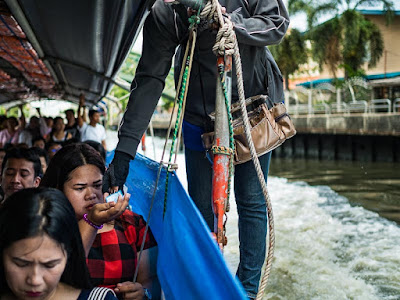 A woman buys a ticket from the ticket seller who walks along a narrow (maybe six inch wide) platform that wraps around the boat. The blue curtain is raised to keep passengers dry.

The truth is riding the boat is not my favorite way of getting around Bangkok. The boat line parallels the Sukhumvit Skytrain line, so if I'm going up or down Sukhumvit I ride the train. But if I'm going out to the Ramkhamhaeng suburbs, the boats are much faster and cheaper than taxis. 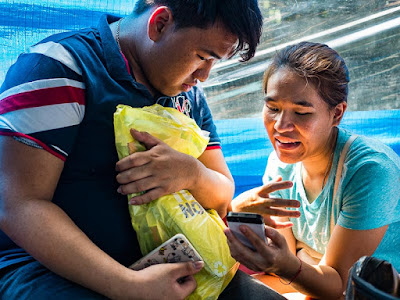 A couple on the boat study her smart phone.

There are a lot more photos of life along Khlong Saen Saeb in my archive. 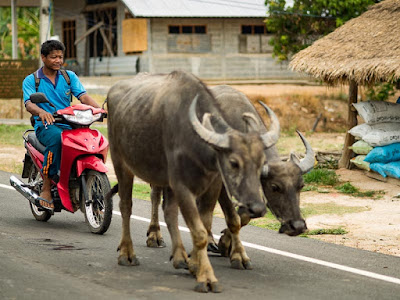 This is what passes for traffic in Isaan. Water buffalo ambling down the main highway through town.

There was a time when water buffalo were the main beast of burden for Thai farmers. That time was decades ago. Now most Thai farmers are mechanized. Their tractors aren't as state of the art as the high tech behemoths used by American farmers, in fact Thai tractors tend to be jerry-rigged contraptions that are slow and loud but also cheap and durable. Rice and sugar cane are harvested by machines that look like a cross between an American combine and a zamboni.

Finally, most of the photos in my archive are available for editorial use or self fulfillment as prints. If you see something you'd like to use or just hang on the wall, click on the "Add to Cart" button and follow the onscreen prompts.
Posted by Jack at 20:35 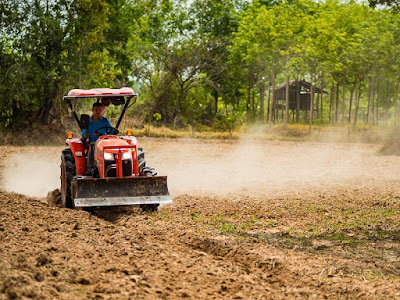 A farmer prepping his field for planting rice kicks up a cloud of dust. There is no end in sight for the drought draining Southeast Asia of water.

I'm back in Thailand and back to documenting the drought that is wreaking havoc on Southeast Asia. Thai officials had been predicting a normal start to the rainy season, meaning it should be starting in late May or early June and continue through October or November.

The first warning bells of a late rainy season came just before we went back to the US, when the Thai government asked farmers to delay their rice planting until the rainy season actually started. Traditionally farmers started planting rice in May, confident of rain in the coming weeks. Asking them to delay planting sent a signal that the rains might not arrive as predicted. Earlier this month, the government said the rains may not start on time and predicted that they would start about a month late, in June or July. 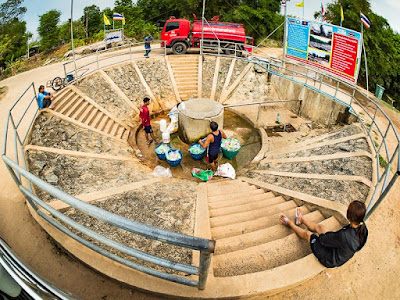 An artesian well in Ban Khana, a village in Surin.

Ban Khana hasn't had significant or meaningful rain since the end of the 2015 rainy season, which was an abbreviated rainy season and well below normal. The village, and surrounding villages, get most of their domestic water from reservoirs and mountain streams. This year their taps ran dry in March. Occasional water shortages, late in the dry season, are not unusual but running out of water months before the rainy season is unheard of. 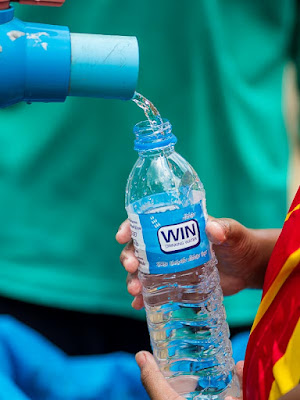 Filling a recycled water bottle at the Ban Khana well. 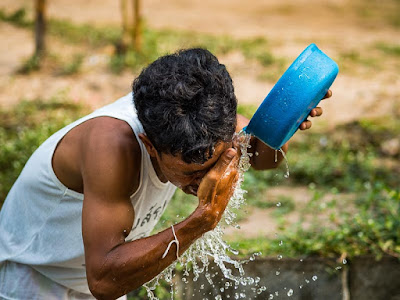 There is a fenced off section of the well where people can bathe.

A steady stream of people come to the well to fill water bottles. Farmers and water haulers come to the well with their tractors and pickup tractors and fill huge water tanks. People I talked to said they couldn't remember a time when their tap water ran out so early in the year. Sometimes water haulers have to wait hours to get under the giant hoses that fill their tanks. 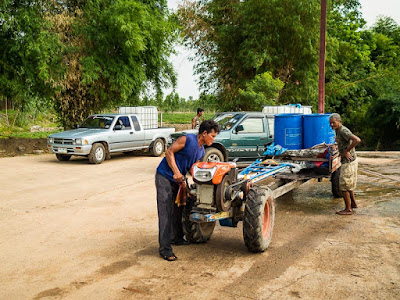 Trucks wait to fill their water tanks while a farmer finishes filling barrels on his tractor. 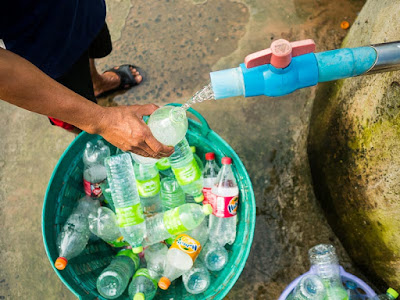 A person fills recycled soft drink and water bottles from the well. The community doesn't charge people who refill small bottles at the well. Water tankers and commercial water haulers pay a nominal fee to fill their tanks. 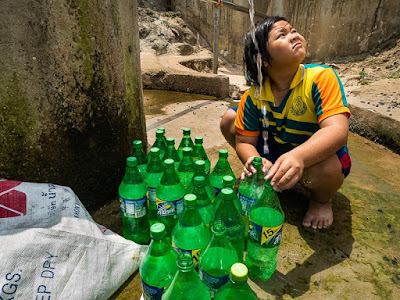 A child refilling soft drink bottles looks up after a thunder clap. The clouds and thunder held the promise of rain but no rain fell in Ban Khana.

The people of Ban Khana are fortunate to have the well in their community. The Cambodian border is just a few kilometers away (most of the people in Ban Khana are ethnic Khmers and speak both Thai and Khmer) and people on the Cambodian side of the border don't have access to the same clean water. 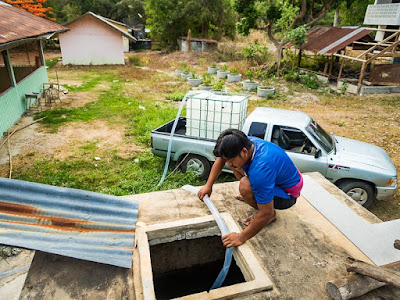 A water hauler fills a cistern at an elementary school in Ban Khana. The school's taps ran dry earlier this year and 100% of the school's water is now hauled up from the well.

As important as the well is, it's not a panacea for the community. Most of the people in Ban Khana and surrounding villages are farmers and it isn't practical to use well water to irrigate the fields. So while people still have a reliable source of domestic water, they're waiting to plant the crops they rely on until the rains come. 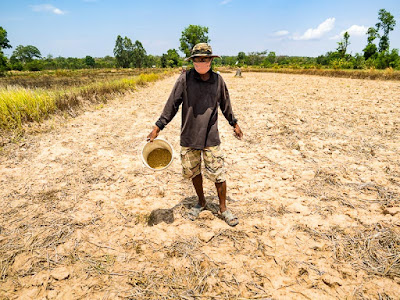 A farmer plants rice in a parched paddy. The government has asked farmers to delay their planting but one farmer told me, "what can we do?" 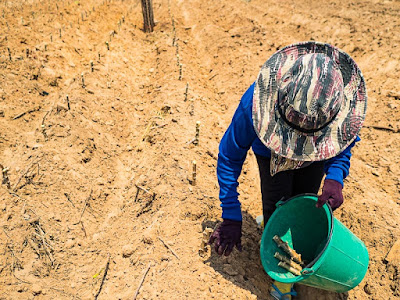 A woman plants cassava in a field near Surin. The Thai government is encouraging farmers to switch to drought resistant crops like cassava but even cassava requires water. This field was so dry it was like walking in talcum powder, my feet sank to my ankles with every step I took. It's not so much top soil as it top dust.

As desperate as the situation is in Thailand, it's much, much worse in Cambodia. Cambodia doesn't have the infrastructure Thailand has. And Cambodia's farms aren't as well irrigated as Thailand's. So far, I've been covering the drought on the Thai side of the border but I'm planning to go to Cambodia in the next few weeks to cover the drought there.

There are more photos of the 2016 drought and the Ban Khana well in my archive or available from ZUMA Press.
Surin Well Provides Water for Community - Images by Jack Kurtz
Finally, most of the photos in my archive are available for editorial use or self fulfillment as prints. If you see something you'd like to use or just hang on the wall, click on the "Add to Cart" button and follow the onscreen prompts.
Posted by Jack at 14:00