A Prayer for the Lovelorn 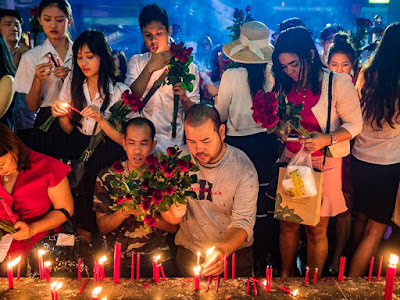 Praying for love at the shrine to Lord Trimurti at CentralWorld, a large shopping mall in central Bangkok.

The spiritual is all around you in Thailand. Sometimes it's observed in small ways, with the anonymous offerings people leave on the sidewalks, to the public displays of faith seen at popular shrines like the Erawan Shrine.

Thais seem to have a very tolerant view of religion. Most Thais (about 85% to 90%) are Theravada Buddhists, but it's not unusual to see Thais blending other religious traditions, especially Hindu ones, with Thai Buddhism. This helps explain with Lord Trimurti is so popular in Bangkok. Lord Trimurti is the three Hindu forms of God personalized: Lord Brahma the creator, Lord Vishnu the preserver, and Lord Shiva the destroyer. 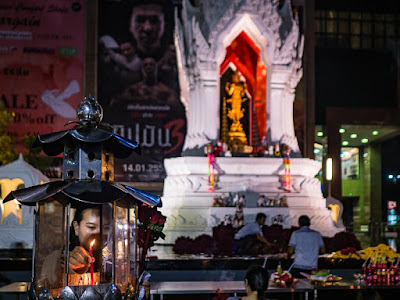 A woman lights a candle at the Trimurti shrine.

On Thursday nights, starting about 19.00 and then peaking at 21.30, hundreds of Thai people come to the Trimurti Shrine, on the large plaza in front of CentralWorld, to pray for love and help in the romantic realm. Thursday night at 21.30 is considered auspicious because that is when Trimurti descends from heaven to hear the prayers of his believers. 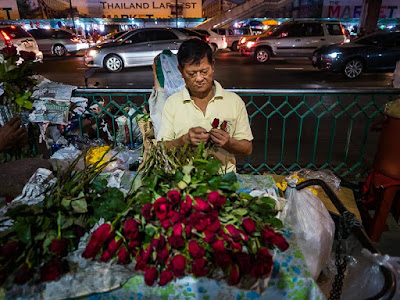 A rose vendor sets up for the evening.

There are rules for praying to Trimurti. You are supposed to pray with nine red roses and nine incense sticks. Many people also bring candles, but usually just one or two. The sidewalk leading to the shrine is lined with flower and incense vendors. You light the incense (and candle if you have one) recite your prayers then leave the roses as the base of the shrine. Workers scoop up the flowers almost as soon as they're dropped. There are no monks leading the prayers, the whole thing is done silently. 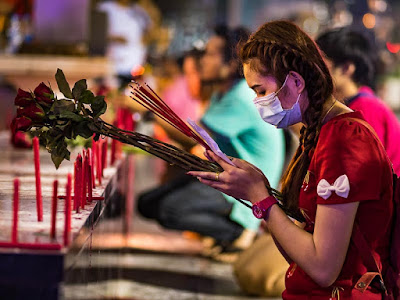 A woman prays at the shrine. 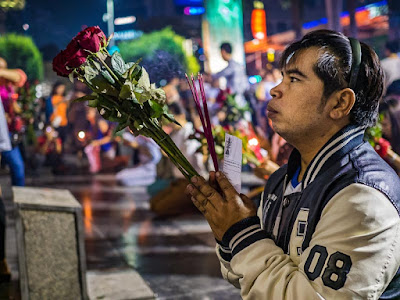 And a few minutes later a man prayed in almost the same spot. 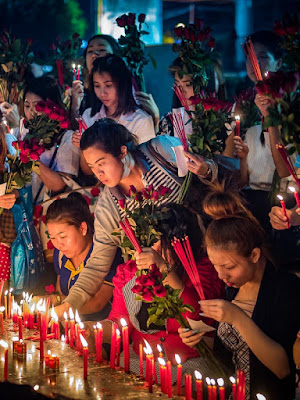 At the busiest time of the evening, between 21.00 and 21.35, hundreds of people line up at the shrine to pray.

Although you get a sense of how popular the shrine is early on a Thursday night, to really appreciate it you should wait until 21.15 or so. It's remarkable. All evening long people alone, or in small groups, pray at the shrine and leave their roses and incense. But then a little after 21.00 there's a change in the crowd. More people light their candles and incense and the crowd around the shrine grows. The size of the crowd peaks just before 21.30 and by 21.45 you would never know they were there. 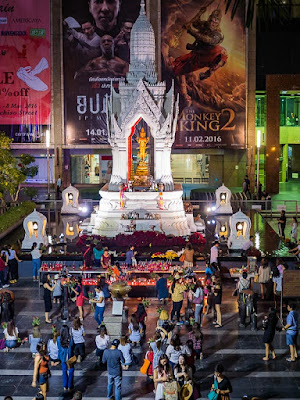 After the crowd has left Trimurti Shrine, in front of Central World.

There are more photos from the Trimurti Shrine in my archive or available from ZUMA Press.
Praying for Love at Trimurti Shine - Images by Jack Kurtz

Finally, most of the photos in my archive are available for editorial use or self fulfillment as prints. If you see something you'd like to use or just hang on the wall, click on the "Add to Cart" button and follow the onscreen prompts.
Posted by Jack at 02:53