The Crisis That Won't Go Away 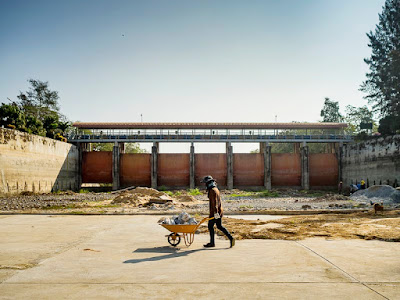 A worker in the spillway of Lam Takhong Dam in Nakhon Ratchasima (Korat). There's usually water running through here, irrigating the fields behind the gate. But because of Thailand's persistent drought, the reservoir is too low to feed the canal.

It seems like I've been photographing drought since I moved to Thailand in 2012. It's an issue that Thai farmers wrestle with every year. Although central Thailand is rich in water resources, it's a feast or famine situation. The Thai government has responded by building a sophisticated network of dams, reservoirs, and canals to store and move water on a reliable schedule. But they can't store or move what they don't have and this year there's no water. 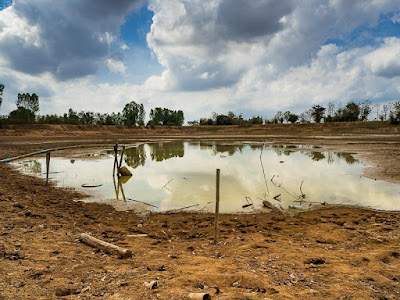 An empty reservoir in Buri Ram province. This reservoir provides domestic water to almost 100 homes in the village. At this time of year, the reservoir should be nearly full. People who live around here now have to buy water from trucks that come to the village every couple of days or look for water. This reservoir is for homes, but the fields are just as dry.

Most of Thailand's rainy season is May - November (the rainy season in the deep south is a little later in the year). Light rains start in May, by July it usually rains every day. Rains start to taper off in mid September and stop by November. It's the way it's always been.

But not for the last two years. The 2014 season was a little below normal. The reservoir I photographed in Buri Ram went dry for the first time anyone could remember in April of 2015 because of the poor rains in 2014 and never completely refilled during the 2015 rainy season. The 2015 rainy season was considerably below normal and the reservoir ran dry in early January 2016. It's not expected to start refilling until late May, or in five months, assuming the rains come in May. 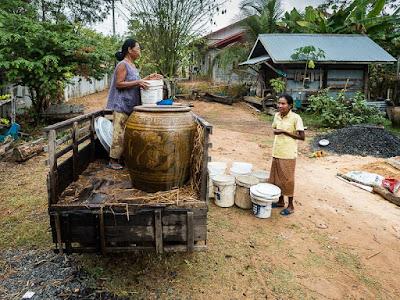 Neighbors in Buri Ram talk about the drought. The woman in the back of the tractor (left) had just returned from looking for water. The woman on the right wanted to buy some.

There's a sense of panic setting in now. Most of Thailand's dams are well below capacity for this time of year. The dam I photographed in Korat is at about 30 percent of capacity. It should be nearly full at this time of year. Some communities in northern Thailand, not just the one I photographed in Buri Ram, may run out of domestic water in the next two months. The rainy season isn't supposed to start until April. There may be some off season rains between now and then but they won't bring relief to the people in the countryside.

The government is encouraging people to plant alternatives to rice (which uses a tremendous amount of water) and some people are planting cassava, corn and drought resistant crops. But rice and farming rice is practically built into the Thai DNA (Thais don't ask if you've eaten yet as a greeting, they ask if you've had rice yet). They eat rice, in some form, every day. Rice is also important for the economy. Thailand has a history of being the world's leading rice exporter. 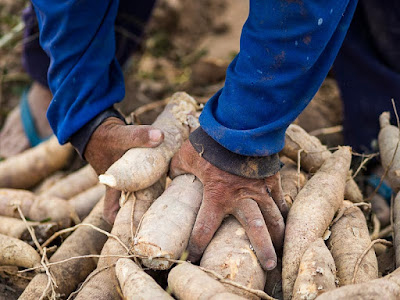 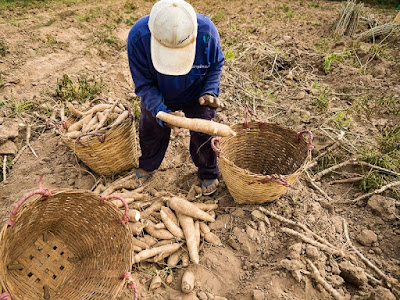 No one is predicting food shortages in Thailand. There's a lot of rice stored in warehouses around the country (because Thailand has a tradition of producing a lot more rice than it consumes) and presumably exports would stop before people went hungry. But the drought is being felt by almost all of the rural people and, because there's so little water for agriculture, will contribute to drop in economic productivity. 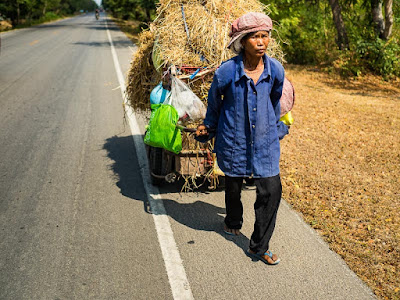 A woman in Korat hauls rice straw home to feed her water buffalo.

Thailand feeds the world. It's one of the world's leading exporters of rice (it goes back and forth between Thailand, India and Vietnam, although Thai rice is usually thought to be the best) and one of the leading exporters of poultry, pork, cassava, fish and shrimp and fruits. All of which require water. Shrimp and fish farms have been told reduce their use of water and it's hard to farm fish without water. 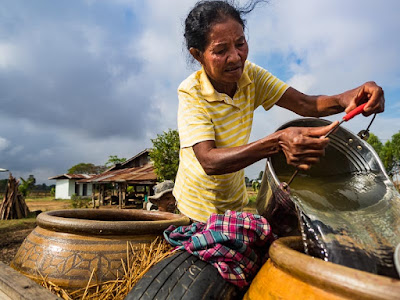 A woman in Buri Ram fills a water jar (called a khlong jar) while she was looking for water. Rural communities in Thailand are close knit. She asked to buy some water from a neighbor. The neighbor said she needed more water and offered water for free if the woman would help refill their jugs so they went out together to get water.

I'd like to believe that things will return to normal with this year's rainy season. The El Niño, that contributed to this year's drought, should be breaking up, and it should start to rain. But there's no guarantee that that will happen.

There are more photos of drought in Thailand and the 2016 drought in my archive.
Drought 2016 - Images by Jack Kurtz
Finally, most of the photos in my archive are available for editorial use or self fulfillment as prints. If you see something you'd like to use or just hang on the wall, click on the "Add to Cart" button and follow the onscreen prompts.
Posted by Jack at 23:34