Opera in the Afternoon 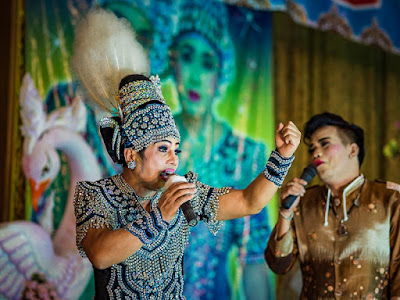 Likay performers on stage during a performance at a temple in Nonthaburi, a little bit north of Bangkok.

I photographed a "Likay" performance today. Likay is a traditional Thai popular art that blends music, song, and exposition into a live show. Likay's roots are not very well documented but it's thought that Likay originated in either what is modern Malaysia or India and came to Thailand with traders and itinerant performers in the 1700s and 1800s, so it's not really an ancient art form.

It's a little bit of an oversimplification to call it a Thai version of Chinese opera, because of the two are not related, but the concept is similar. Troupes put on shows for a night or two (or three or four or however long someone will pay them to). Shows are usually put on at temples, during temple fairs. There is very little staging - usually it's just a bare platorm, the audience is transported into the performers' world through ornate costumes and the performers' skill at improvisation. Male performers put on their makeup before the show. Technically, they're in the wings of the stage, but since there are no curtains and they're easily seen from the audience's perspective, they're sort of a part of the show. 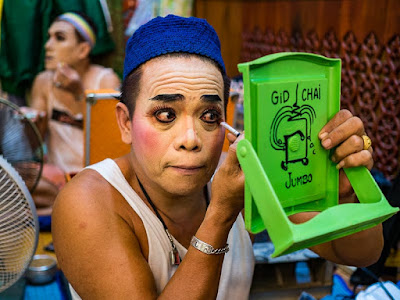 Likay is still popular in rural Thailand - you see posters for likay troupes whenever you go upcountry - but its fading in urban Thailand. I lucked out and found a performance in a province north of central Bangkok, but still in the Bangkok metroplex. I didn't go to Wat Bua Khwan (the link goes to their Thai website) looking for the Likay show. I was actually there researching another story, but that proved to be a dead end. I happened to be at the temple the weekend of their annual temple fair and stumbled into the Likay show before the performance started.

Since the story I went to the temple to photograph wasn't happening, I stayed for the Likay show. It's typical of Thailand that the performers were completely open to my photography. I didn't just walk in - I walked up to the foot of the stage and a couple of actors called over to me and motioned that I should join them in the dressing rooms and photograph them. And who am I to turn down an invitation like that? 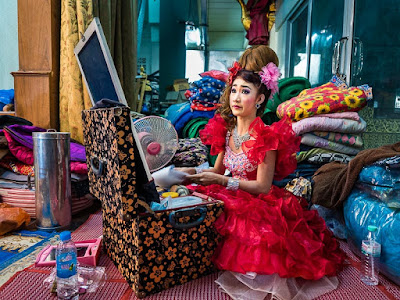 In the wings, a woman gets ready to go onstage. Most of the hair is a wig. In the early days of Likay, all of the roles were played by men. Now the women's roles are played by women.

I photographed for about an hour before the show started. A couple of the actors spoke a tiny amount of English and I speak a really, really tiny amount of Thai (my Thai consists almost entirely of the sentence "I don't speak Thai.") but my "universal translator" saved the day. I used to explain to the Likay cast that I had lived in Thailand for four years and that I was a journalist. They used it to offer me lunch (a variety of curries). 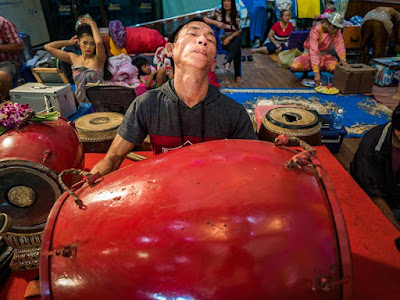 There is no "orchestra pit." The band plays on the wings of the stage, where the audience can see it. The actors use the area behind the band, also in view of the audience, as a dressing room.

In reality, my universal translator is the Google Translate app on my iPhone, which works pretty well if you use it properly and give it time to do its thing. Although I try to avoid using Google apps on my iPhone (DuckDuckGo is my preferred search engine), Google Translate is pretty much indispensable for what I do.

The show started with the band, which is almost entirely percussion instruments, tuning and warming up. That transitioned seamlessly into performers, backstage, singing their lines. Which, moments later, leads to actors on stage and the opera starting. It was less than 10 minutes from the first drum beat to the lead being on stage. 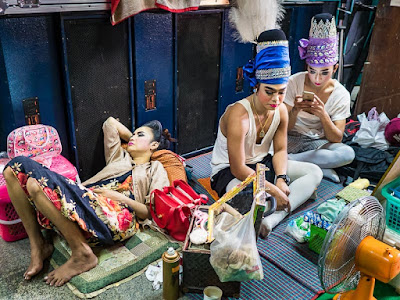 While some of the actors are on stage, others wait off stage for their cues. The whole thing is very relaxed. 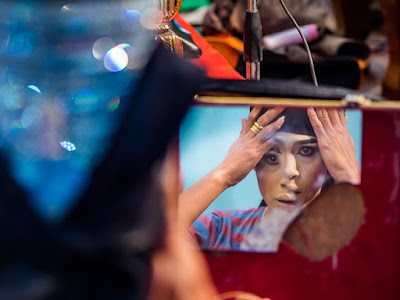 One of the actors uses a cracked mirror to adjust his hat.

I've photographed a lot of Chinese opera in the last couple of years but this was my first Likay. I had a good time and thought it was very interesting. I hope to photograph more Likay in the next year. 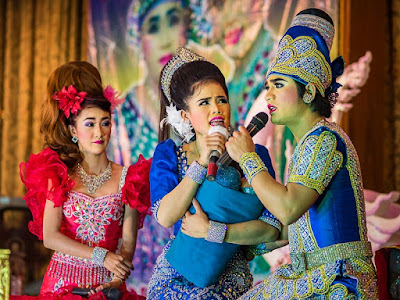 There are more photos from the Likay show (along with photos from Wat Bua Khwan) in my archive or available from ZUMA Press.