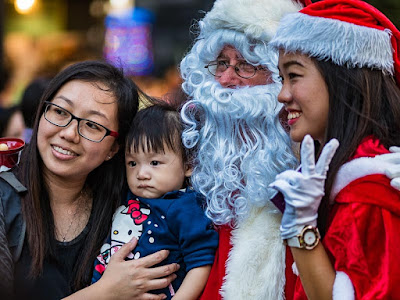 Santa Claus and one of his helpers pose for photos on Orchard Road in Singapore.

Merry Christmas to everyone. We're in Singapore for a short get away from Bangkok. As wildly as Bangkok celebrates Christmas (and it is wildly and widely celebrated in Buddhist Thailand), it's an even bigger deal in Singapore. Part of this is understandable because of Singapore's history as a British colony and part of it is related to the way Christmas is embraced in Asia. Not the theological aspects of course (except in the Philippines, which is predominantly Catholic) but in the gift giving sense and certainly in the commercial sense. 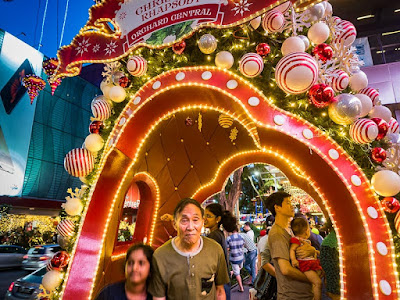 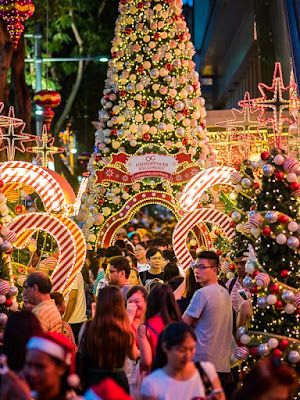 People walk through the fantastic light displays on Orchard Road on Christmas evening in Singapore.

It amuses me when conservatives in the US complain about the "War on Christmas." It's the most widely celebrated religious holiday in the world and not just by Christians. You can't escape Christmas displays anywhere in Buddhist Asia. 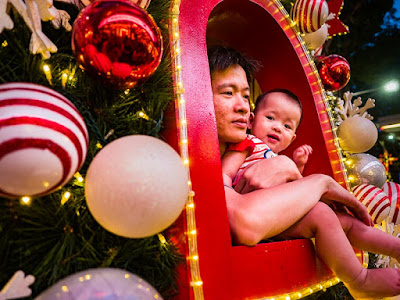 A man and his son in a Christmas display on Orchard Road.

Finally, most of the photos in my archive are available for editorial use or self fulfillment as prints. If you see something you'd like to use or just hang on the wall, click on the "Add to Cart" button and follow the onscreen prompts.
Posted by Jack at 07:48