Fun at the Fair 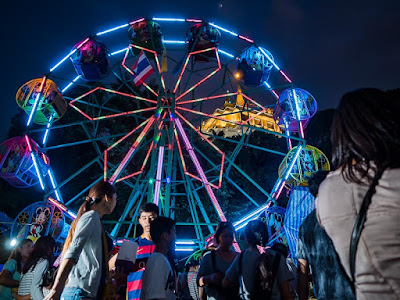 A Ferris Wheel at the Wat Saket temple fair. The chedi is in the background.

I went to the temple fair at Wat Saket a couple of times this week. One day it rained, which dampened my enthusiasm for the fair, one day it was so crowded I couldn't move through the crowd or photograph but the third time was just right.

The Wat Saket fair is probably the most popular temple fair in Bangkok. It runs for nine days around the November full moon and brings tens of thousands of people down to the narrow streets and old neighborhood around the temple. 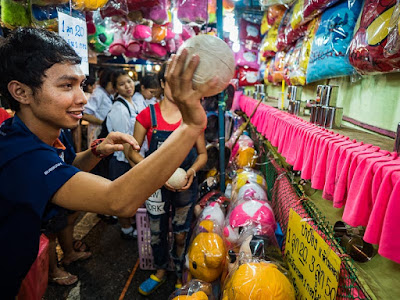 A ball game on a midway at the fair. There are arcade games all around the temple.


The fair itself is a combination of the religious and the raucous. People visit the many small prayer rooms around the temple and the chedi at the top of the temple to pray.

And when they're done praying, they visit the fair around the temple for fun. 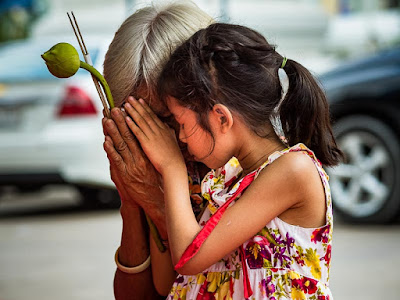 A woman and her granddaughter pray in front of the temple. 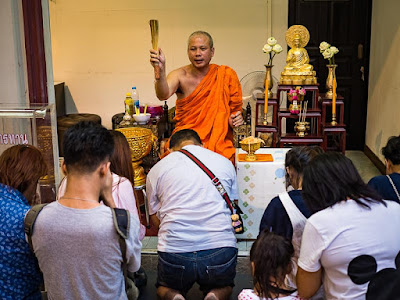 A monk blesses people near the top of the chedi. 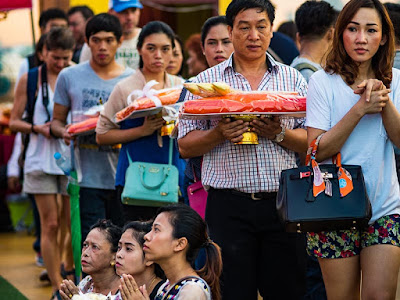 People pray and walk around the chedi in prayer. 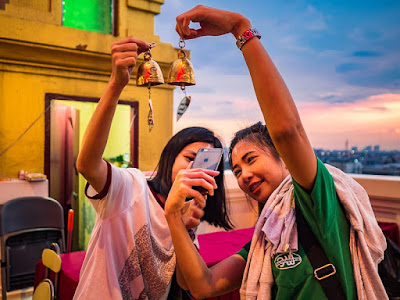 Girls try to photograph prayer bells they donated to the temple as a form of merit making.

Wat Saket has interesting history. There has been a temple on the site for hundreds of years, predating the founding of Bangkok. When Bangkok was selected as Siam's capital, Wat Saket was built up and renovated.

The temple was outside the city's gates. When a cholera epidemic overwhelmed the crematoriums and temples inside the city walls in the early 19th century, the bodies were dumped at Wat Saket. At the same time, a tall man made hill was built on the site to accommodate construction of a chedi that would overlook the city. The hill was also the cemetery for the cholera victim, the temple is built atop a cemetery of cholera victims. (There is a rather gruesome diorama of vultures feasting on human remains at the temple to mark its origins.)

The temple was once the tallest point in Bangkok. It's 318 steps to the top and there is no elevator or escalator. Bangkok's building boom, which started in the 1960s and continues today, forever altered the city skyline and now Wat Saket is overshadowed by the city's newer temples to commerce. But it still dominates the skyline of the old city (where zoning regulations are sort of enforced).

Wat Saket is the best place to make sunset photos of the "new" city, commercial Bangkok which lies to the east of the old city. 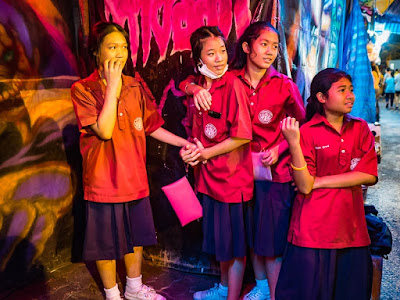 Girls wait to get into a haunted house at the fair. 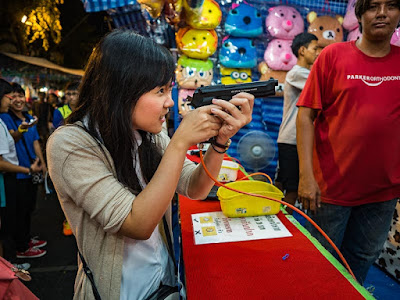 There several arcade shooting games at the fair. 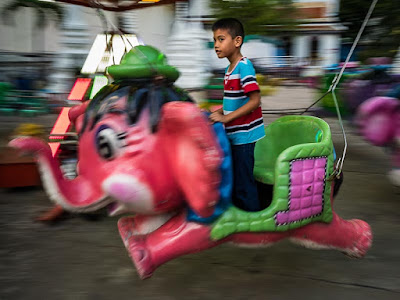 Of course there are rides... 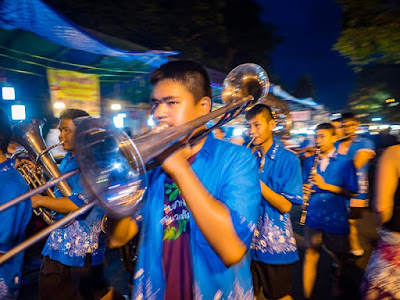 The Wat Saket temple fair is one of the autumn highlights of Bangkok's year. It comes just as the rainy season is ending and the city is starting to cool off a little at night. It is a lot of fun and one of my favorite events.

There are more photos of the Wat Saket temple fair in my archive.
Wat Saket Temple Fair 2015 - Images by Jack Kurtz
Finally, most of the photos in my archive are available for editorial use or self fulfillment as prints. If you see something you'd like to use or just hang on the wall, click on the "Add to Cart" button and follow the onscreen prompts.
Posted by Jack at 10:30