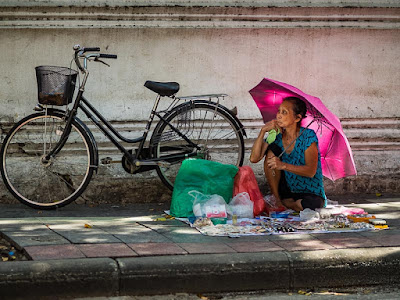 A vendor sits on the sidewalk, waiting for customers, at the amulet market on Maharat Road in Bangkok. City officials closed the sidewalk amulet market this week, forcing vendors to move more than an hour away.

It's another week in Bangkok and another street market has been forced to close. The amulet market, on Maharat Road near the Grand Palace, has been a Bangkok landmark for generations and even has its own page in the Lonely Planet guide. 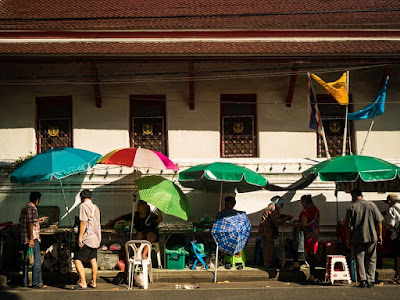 Hundreds of vendors lined the streets in the neighborhood selling Buddhist amulets and religious paraphernalia. Across the street, along the Chao Phraya River, there was a more permanent covered market that also sold amulets.

The market was a Bangkok landmark. Thais, lay people and Buddhist monks, came to the market to shop for their spiritual needs. Tourists came to see a unique slice of Thai life. 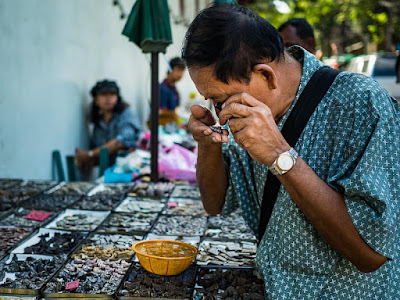 A shopper uses a jeweler's loupe to appraise an amulet. Buying and selling amulets is a serious business to many Thais. 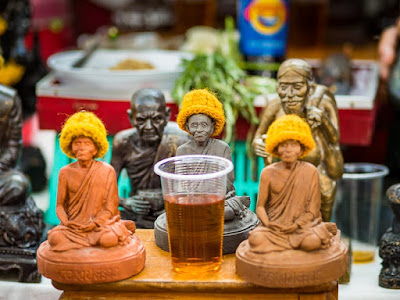 One vendor put a small shrine in his "shop."

Change is constant in Bangkok though and property on the river is ripe for redevelopment. About 1/3 of the covered market closed last year and was redeveloped into a "riverwalk." The small mom and pop amulet vendors have been replaced with Starbucks and expensive chain restaurants. 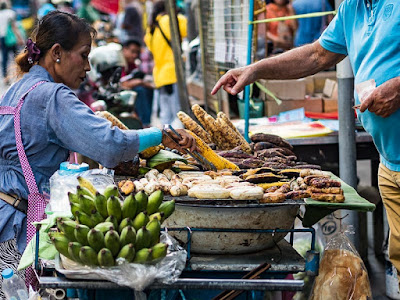 A "farang" (foreign) tourist buys grilled vegetables from a street vendor. Not just the amulet vendors had to move out. The food vendors were also evicted.

This is a complicated issue and it's much more than just street vendors taking up space on the sidewalk. The city is right, the vendors do make it difficult to navigate the sidewalk. But this is Bangkok and we take such inconveniences in stride. The vendors are popular with their customers and meet a community need. 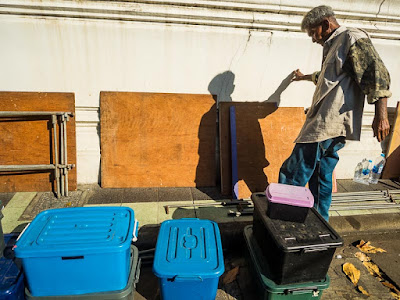 An amulet vendor takes down his stand on his last day in business.

Even though the street markets seem chaotic, there is a logic and system in place. Vendors don't just spread a blanket on the sidewalk and layout tchotchkes. Some of the vendors have been at the same place for years and have turned their spot on the sidewalk into a shop of sorts, albeit one that doesn't have walls. The vendors paid "rent" to police and municipal officials responsible for the sidewalk. If the vendor was in front of a traditional shop, they paid rent to shop owners.

Finally, this is the vendors' livelihood. It's how they support their families and send their children to school. Forcing them to relocate to small markets in a province an hour away will be an economic death sentence for many. Some of their customers might follow them, but most will not. Certainly the tourists will not venture out to the provinces to visit the amulet market.

The amulet market is not the first street market shut down in Bangkok and it certainly won't be the last. Officials have already announced plans to evict the street vendors from the front of the flower market, another Bangkok landmark.

It reminds me of the Joni Mitchell song "Big Yellow Taxi" when you pave paradise and put up a parking lot.

There are more photos of the amulet market in my archive or available from ZUMA Press.
Amulet Street Market Closing - Images by Jack Kurtz
Finally, most of the photos in my archive are available for editorial use or self fulfillment as prints. If you see something you'd like to use or just hang on the wall, click on the "Add to Cart" button and follow the onscreen prompts.
Posted by Jack at 09:00