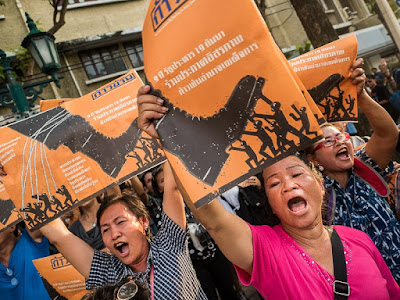 There was an anti-coup protest in Bangkok Saturday. The protest came at the end of a seminar about Thailand's 2006 coup that deposed Thaksin Shinawatra, the incredibly rich elected (and then reelected) populist Prime Minister. Several hundred people gathered at Thammasat University for the seminar and then marched to Democracy Monument.

The NCPO (the junta that rules Thailand) warned that the marchers would not be allowed to leave the university campus and there was a large police presence at the university gates. Protestors marched to the gates, talked to the Police Colonel in charge of the scene and then marched up to Democracy Monument. 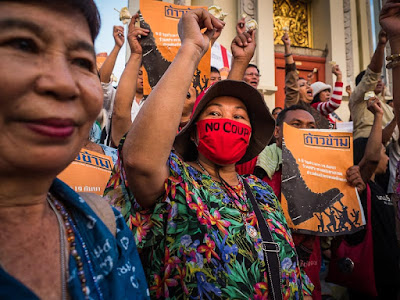 Police set up a perimeter around Democracy Monument. When protestors got there, they walked past the police moved onto the grounds of the Monument. There were no arrests and no violence. 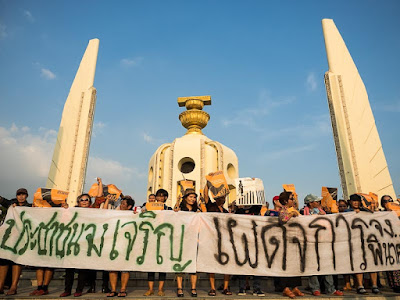 Protestors at Democracy Monument. According the Bangkok Post, the banner says, "Long live the people, down with dictatorship."

Saturday's protest was by far the biggest protest in more than a year. There have been a couple of protests and marches that were announced but they were all stopped by either the military or police before they gathered any momentum. I'm not sure why this one was allowed to proceed when others were not.

Even though this was the biggest, most sustained protest in more than a year, it was still, in the continuum of Thai political protest, tiny.

Bangkok is a city of 10 - 12 million (depending on who is counting and what they consider Bangkok). Two hundred people marching 1.6 kilometers is barely a blip on the radar. The protests we witnessed in 2014 (and 2010) had hundreds of thousands of people gridlocking vast swaths of the city.

The other thing I thought was interesting about this protest was its demographics. It was not the usual political players.

It was mostly middle aged and older women and men. The same demographic who protested the aborted election in 2014, when militants aligned with Suthep Thaugsuban brought the election to a crashing halt by intimidating voters and attacking polling places. The demographic we sometimes call "grannies and aunties." 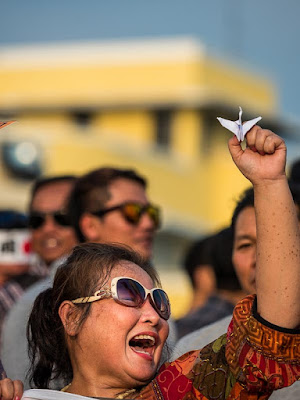 A protestor holds up an origami dove.

The question is what does this mean going forward? Was the police reaction a one time thing or does this signal a new policy of managing protests? We won't know the answers to that until people try to organize another march.

There are more photos from the protest in my archive or available from ZUMA Press.
Anti Coup Protest at Democracy Monument - Images by Jack Kurtz
Finally, most of the photos in my archive are available for editorial use or self fulfillment as prints. If you see something you'd like to use or just hang on the wall, click on the "Add to Cart" button and follow the onscreen prompts.
Posted by Jack at 11:30