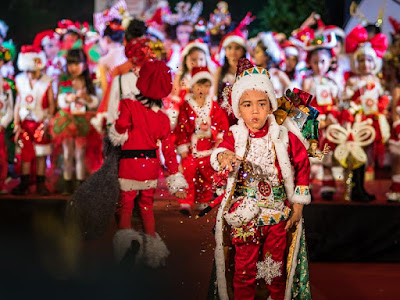 A contestant in a Santa Claus pageant at Gateway Ekkamai, a Bangkok mall, drops a glitter bomb during his time on the catwalk.

Thailand is a Buddhist country, Christians make up less than two percent of the population. But no one celebrates Christmas with the enthusiasm Thais do. December in Bangkok is as sparkly and Santa laden as Christmas at the North Pole itself.

Still, even by Bangkok standards, the idea of a Santa Claus convention in Bangkok is a bit farfetched. Yet, that's exactly what happened today. The World Santa Claus Congress, a Danish annual celebration of Santa, came to Snow Town, a wintery theme park in Gateway Mall in Bangkok. 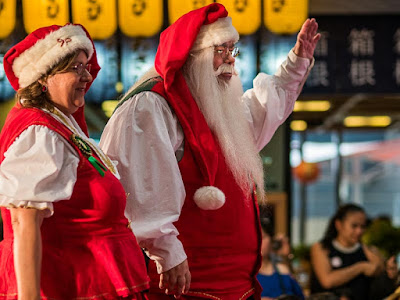 A Mrs and Mr Claus make their entrance. There were 26 Santas from around the world. Denmark, France, Germany, the US, Canada, Hong Kong and Japan all had Santas in attendance.

I went to the World Santa Claus Congress to see what Santa could possibly have to do in Bangkok in September. Turns out Santa and his compatriots were there mostly to judge a Santa Claus pageant. 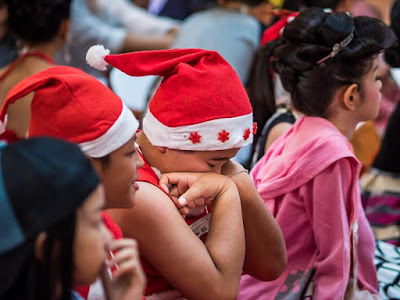 An aspiring Santa gets some rest before the pageant started... 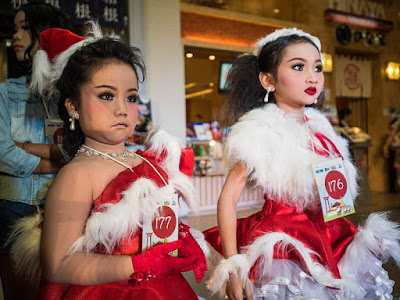 Hundreds of youngsters came dressed in their most Santa Clausian outfits, boys as the Jolly Old Elf, girls as his domestic partner.

It was trippy. Even though every Thai kid knows who Santa Claus is (thanks to the prevalence of western media and movies like "The Santa Clause" or "A Christmas Story" or my personal favorite "Bad Santa"), the Santa tradition is pretty far removed from Thai culture. The costumes reflected that. Or maybe they were just designed with Thailand's stifling heat in mind. 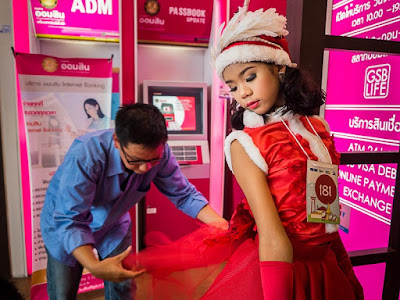 A Mrs Claus contestant gets help with her outfit. 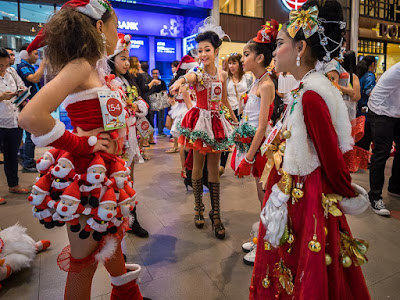 It was as over the top celebration of Christmas and Santa as any I've seen. The winner of the pageant came dressed in a remarkable Mrs Claus meets Carmen Miranda mash up. 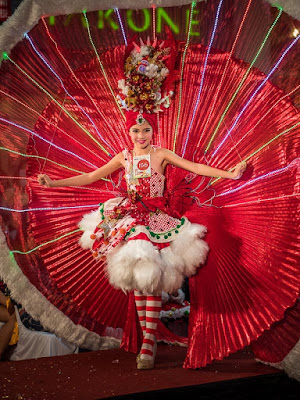 The Santa Claus pageant winner. Mrs Claus never wore anything like that when I was a kid.

Mrs Claus pulled a wire while she prowled the catwalk and a giant I don't what to call it opened behind her. She (or her parents) must have put hours of work into the gizmo/outfit and, although it wasn't traditional, it was fun. She deserved the prize.

There are more photos from the Santa Congress in my archive or available from ZUMA Press.
World Santa Congress in Bangkok - Images by Jack Kurtz
Finally, most of the photos in my archive are available for editorial use or self fulfillment as prints. If you see something you'd like to use or just hang on the wall, click on the "Add to Cart" button and follow the onscreen prompts.
Posted by Jack at 11:30