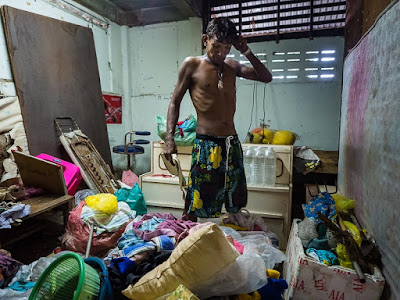 A man packs up his belongings in a home in the Wat Kanalaya neighborhood.

I've been back to the Wat Kanalaya neighborhood a couple of times to talk to people and photograph changes in the community. People are packing up and demolition work is being done almost every day now. A couple of people told me they have until the end of October to be out of their homes. 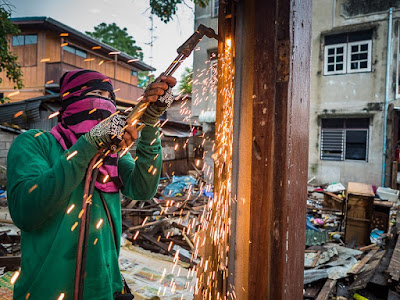 The demolition work is being done by hand. A worker uses a cutting torch to cut a metal gate out of a home... 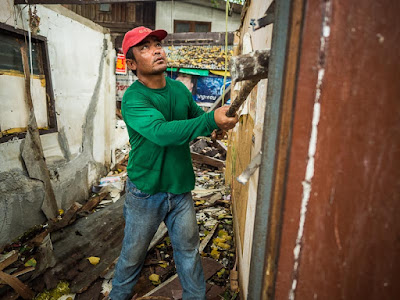 While another worker uses a sledge hammer to literally knock down a house.

It's hard to overstate the economic wreckage this is causing for the families being evicted. Many of the families own their homes, the structures, but they rent the space, the land the homes sit on. Although their rents are fairly low (some as low as 600 THB, less than $20 US, per month), many of the families have invested relatively large sums in their homes.

Other people told me the temple's offer to buy construction materials salvaged from people's homes was capped at 15,000 THB regardless of the size of the home. People are trying to sell the construction materials in their homes to salvagers, but they are having a hard time getting all the necessary permissions (because their homes are on temple land) lined up to complete the sales. Many told me they fear they will have to accept the temple's 15,000 THB offer. 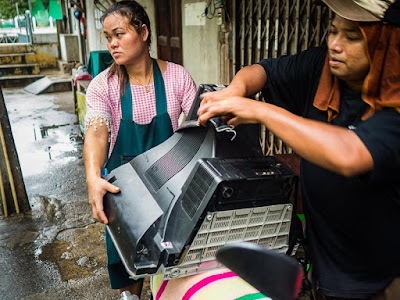 A couple packs their belongings, including a TV, onto the back of a motor scooter.

I asked one woman, a shopkeeper in the neighborhood, what she was going to do when she left. She told me her son was supposed to graduate from high school this year and that she was looking for a small place nearby so he could stay in school and she could stay with him. She said that when he graduated she would probably return to her province in central Thailand and "grow rice." Looking around the shop, she said, "I can't start this over again. I don't have the money to open another shop. Farming is all I can do."

I was talking to a family about their plans. Their patriarch said he found a place in Nakhon Pathom province (about 90 minutes from Bangkok) where he could set up his shop and start fresh. Then his daughter spoke up. Choking back tears, she said, "but this is our home. We are all family here. If someone doesn't have money, we let them have food. We're losing more than our homes. We're losing our family." 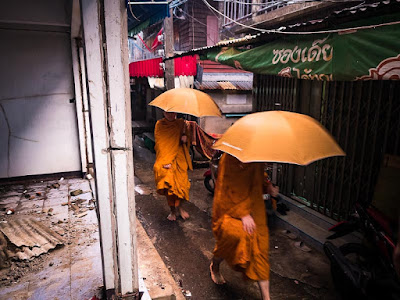 Monks from a nearby temple (not from Wat Kanalaya) walk through the neighborhood on their way to the Chao Phraya River.

There is little the residents around Wat Kanalaya can do now. The courts have consistently ruled against them and there is no disputing who owns the land. So the evictions and destruction of the neighborhood will, almost certainly, continue.

There are more photos from the Wat Kanalaya evictions in my archive.

Wat Kalayanamit Evictions - Images by Jack Kurtz
Finally, most of the photos in my archive are available for editorial use or self fulfillment as prints. If you see something you'd like to use or just hang on the wall, click on the "Add to Cart" button and follow the onscreen prompts.
Posted by Jack at 09:50