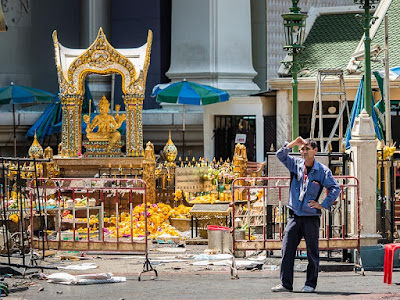 A man in front of Erawan Shrine. 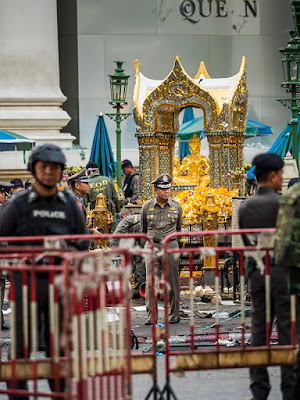 The Thai police chief surveys the scene of the terror bombing.

The nightmare of the bombing at Erawan Shrine was all too real Tuesday morning. The death toll stands at 22 with more than 100 still hospitalized. Ratchaprasong Intersection was closed through the morning but reopened in the afternoon, although the shrine is still closed. 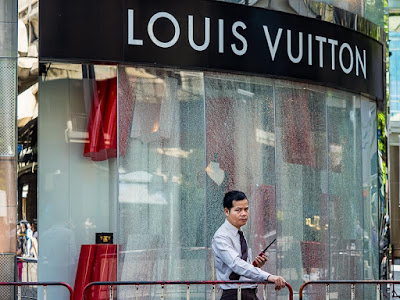 A security guard at the Louis Vuitton store in front of the store's massive display window, broken by the blast.

Police worked overnight Monday into Tuesday collecting evidence and ensuring that there were no follow on bombs (it's a common tactic at terrorist bombings to set off one device and then later a second device to kill people responding to the first explosion). 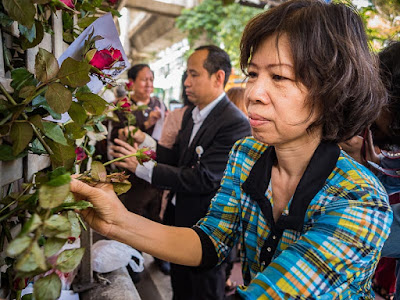 People leave flowers for the victims of the bombing.

Thai media have speculated that Uighurs might be responsible because Thai authorities forcibly repatriated Uighur refugees back to China, where they face political repression. There is not one scintilla of evidence to support the speculation that it was Uighurs.

Others have speculated that is was Red Shirt supporters of ousted Prime Minister Thaksin Shinawatra. It is not in the Red Shirts' interest to stage an attack like this and they have no history of causing mass casualty attacks like this.

Still others have speculated that it was Muslim insurgents from Thailand's south. The attack bore some of the trademarks of an insurgent attack (a remotely detonated IED) but they have never staged an action outside of the south and never one of this scale.

There is speculation that it was a faction within the security services who don't support Prime Minister General Prayuth Chan-o-cha, who seized power in a coup last year. But there is not one scintilla of evidence to support this scenario either.

All we know is that no one has taken responsibility for the bombing and until someone does, or until police make an arrest, we won't know. 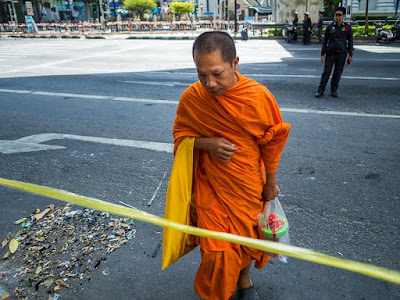 A monk crosses the street in front of the shrine.

That's not to say authorities don't have any clues. They have forensic evidence from the scene. They have witness accounts. They have dashcam footage of the explosion. And they have closed circuit video footage of the attack. There are CCTV cameras all over this part of Bangkok. They watch the traffic, the malls, the hotels, the shrine itself. They have hours of footage from hundreds of cameras to review. They have clues. 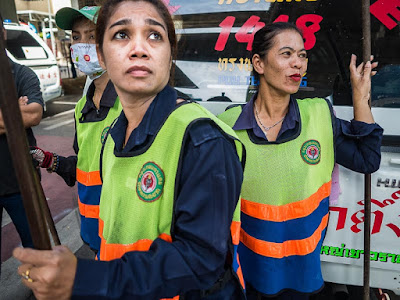 Some of the women who work as street sweepers for the Bangkok Municipal Authority (BMA) get their first view of the shrine before they start sweeping up the mess. 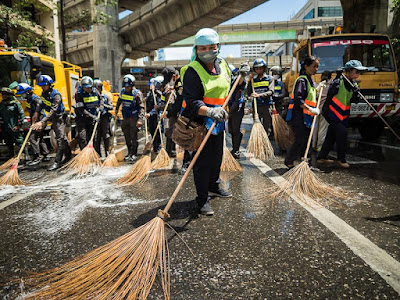 Street sweepers, police and soldiers cleaned the streets after the explosion.

Police have released a sketch of man they're calling a suspect in the attack. He's identified as being a foreign man who acted with the assistance of Thais but no arrests have been made.

In the meantime, a sense of normality is coming back. The shrine remained closed Tuesday but people still come to pray and there's a small memorial on the sidewalk at the northeast corner of the shrine. Earlier Tuesday night there was a candlelight vigil for victims of the bombing. 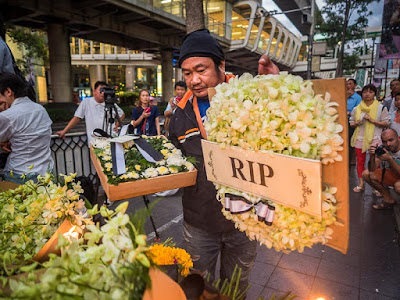 A man delivers flowers to a memorial for victims of the bombing. 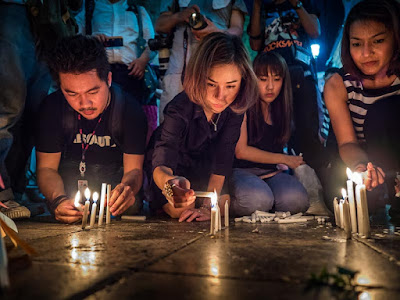 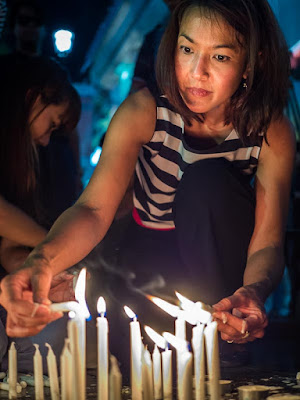 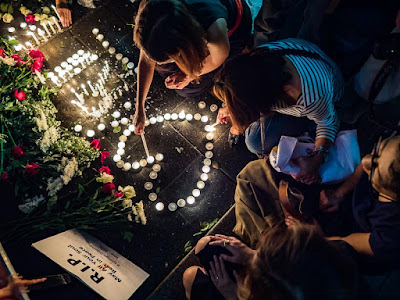 And people light candles in honor the deceased.

There are more photos from the bombing and its aftermath in my archive or available from ZUMA Press.

Explosion at Erawan Shrine - Images by Jack Kurtz
Finally, most of the photos in my archive are available for editorial use or self fulfillment as prints. If you see something you'd like to use or just hang on the wall, click on the "Add to Cart" button and follow the onscreen prompts.
Posted by Jack at 11:30