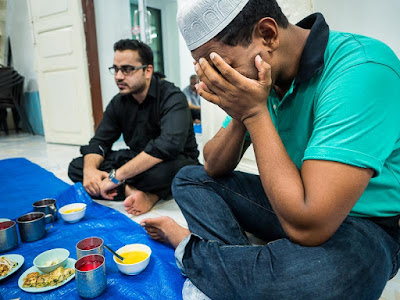 A man prays before breaking the Ramadan daily fast at Iftar at Haroon Mosque in Bangkok.

This is the holy month of Ramadan, when Muslims around the world fast during daylight hours to commemorate the first revelation of the Quran to Muhammad. Properly observing Ramadan is one of the Five Pillars of Islam. 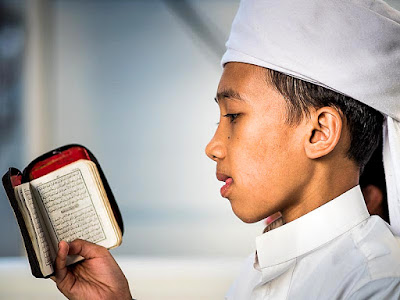 A boy reads the Qu'ran before the evening call to prayer.

Iftar at Haroon Mosque is a community event. Even though it's a small mosque, it draws people from across Bangkok. The mosque was started by Javanese merchants in the 1800s. The mosque is close to the Chao Phraya River in a part of Bangkok that draws a lot of tourists. People at the mosque are used to strangers wandering through the community and treat them like honored guests. 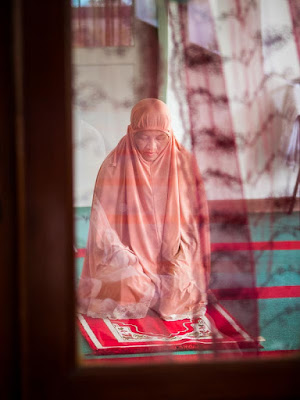 Seen through a lace curtain, a woman prays in the women's prayer room at the mosque.

Breakfast is served before morning prayers, well before sunrise. Iftar is served around sunset. People have been fasting for nearly 14 hours. No food, and if possible, no liquids, including water. By the end of the day, they're hungry and thirsty and when the Iftar time arrives people eat. If I am eating with them (and it would be rude to refuse the invitation), I have about 1 minute to eat and start making pictures because the breaking of the fast takes just a couple of minutes before people go back into the mosque for prayers. 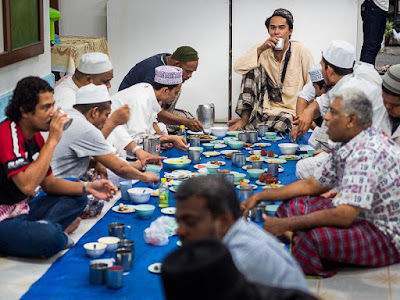 There are more photos of Iftar in my archive or available from ZUMA Press.
Iftar at Haroon Mosque - Images by Jack Kurtz
Finally, most of the photos in my archive are available for editorial use or self fulfillment as prints. If you see something you'd like to use or just hang on the wall, click on the "Add to Cart" button and follow the onscreen prompts.