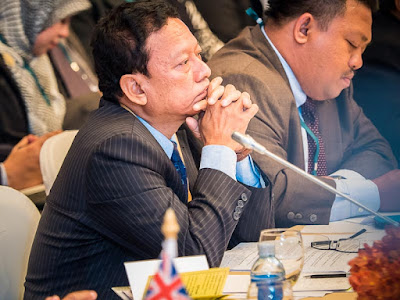 I covered a conference about the Rohingya boat people this morning. The conference was in the event rooms at one of Bangkok's better hotels. The room was nice but very dark and I was forced to use high ISO and slow shutter speeds, not a combination I usually like. But the in body image stabilization in the E-M5 Mark II saved me.

How effective is Olympus' in body image stabilization? Very effective. The top photo was made with a 40mm-150mm f2.8 lens and a 1.4X teleconverter. The focal length was 210mm, which because of the 2X crop of Micro 4:3 compared to "full frame" works out to a 420mm lens. The exposure was 1/10th of a second @ f4, handheld. Think about that for a moment. A 400mm lens handheld at 1/10th of a second. And this was not a fluke or one off success. Here are two more samples. 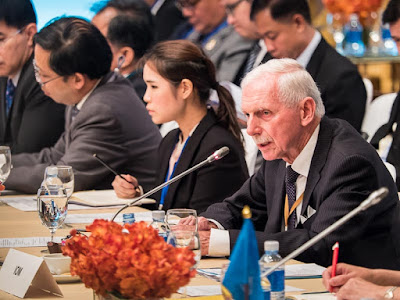 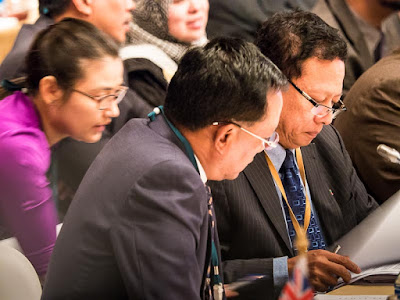 Same lens, again 1/10th of a second. Handheld. The woman on the left is blurry because she was moving, But the man on the right, the subject of the photo, is sharp.

This pretty much blew me away. I've been impressed with the in body image stabilization in my E-P5s since I started using them. But I never would have expected to get sharp pictures at 1/10th of a second handheld with a 400mm lens, even with the in lens stabilization used by Canon (or Nikon). Amazing.

Finally, most of the photos in my archive are available for editorial use or self fulfillment as prints. If you see something you'd like to use or just hang on the wall, click on the "Add to Cart" button and follow the onscreen prompts.
Posted by Jack at 09:07