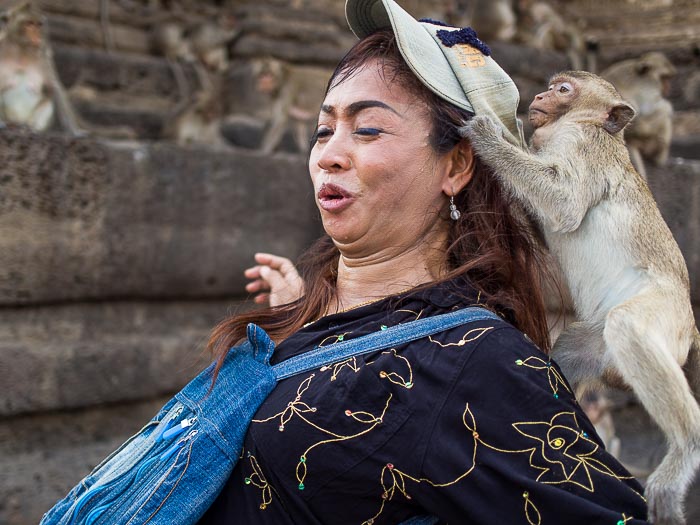 A long tailed macaque tries to steal a tourist's hat at the Monkey Buffet in Lopburi.

We went to one of those uniquely Thai events today. The Monkey party and buffet in Lopburi is an annual event in the small provincial town of Lopburi, about two hours from Bangkok. 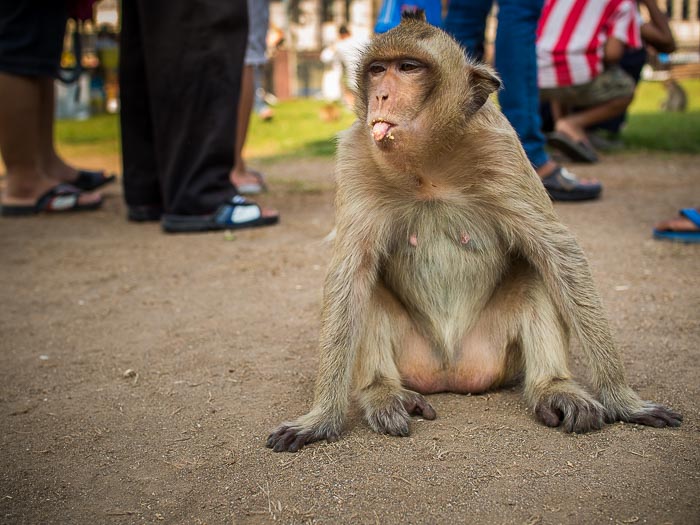 A macaque waits for a handout.

Lopburi is an ancient city, one of the first cities in central Thailand, and has a history going back to early 17th century. Despite its history, it wasn't really on the tourist trail and not many people were stopping in Lopburi. The town is also home to thousands of long tailed macaque monkeys. The monkeys wander through town with impunity.

Monkeys are highly thought of in Southeast Asian cultures. Hanuman, the Monkey God, was a close ally of Rama in Hindu mythology and the Ramayana, which in Thailand is known as the Ramakien.

But whether the monkeys of Lopburi are revered or tolerated depends on how you feel about them getting into everything. They'll take anything that's not bolted down, including food from your hand while you're trying to eat it. They will reach in, literally, while you're moving food from your plate to your mouth and snatch it away.

In the late 1980s, a Lopburi hotelier was trying to figure out how to draw tourists to his sleepy little town with a huge monkey population. The solution was obvious. A Monkey Party! A buffet to feed the city's simian citizens.

And thus was born the Lopburi Monkey Party. 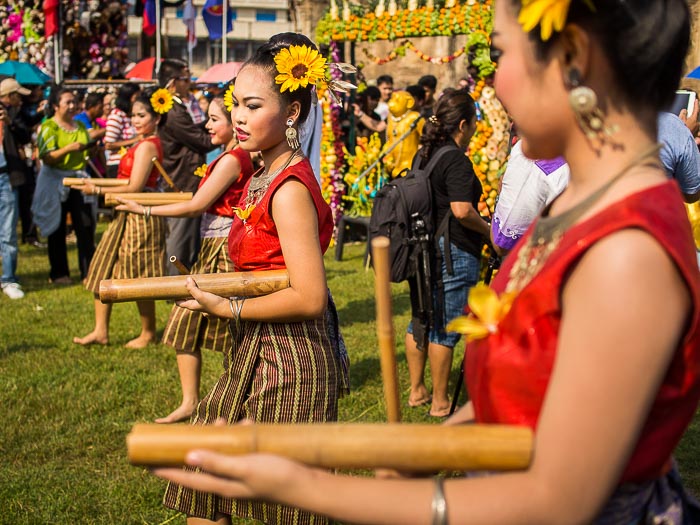 The buffet started at 10AM, but people started arriving early. We got there about 8.15AM and there was already a big crowd photographing and feeding the monkeys. The monkeys, for their part, seem to enjoy the attention. They certainly like the food. They scramble across the ground picking up crumbs dropped by tourists, occasionally mix it up with other monkeys when there isn't enough food to go around. If you stand still, for even a moment, you end up with juvenile macaques climbing up your legs trying to get their hands into your pockets. They'll take your cell phone, your keys, your money. Pretty much anything they can get grip on. 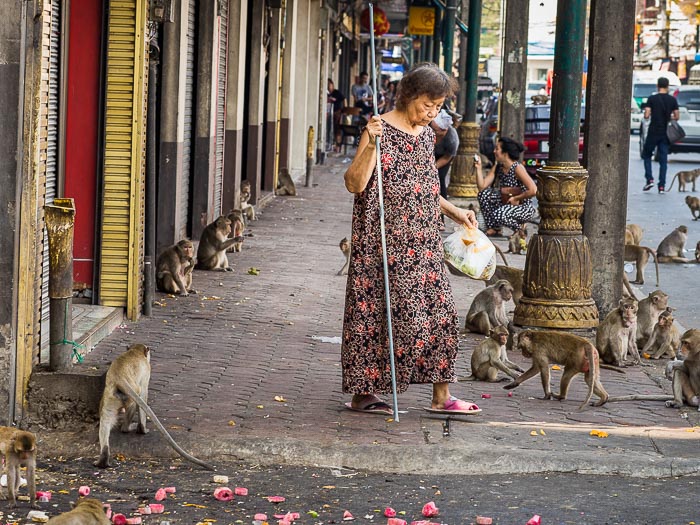 A shopowner walks down a monkey infested street in Lopburi. She used the pole to push away monkeys who wandered into her shop.

Volunteers start working on the buffet about an hour before feeding time. They set out huge tables of fruit and vegetables and try to create elaborate centerpieces.

The monkeys, for their part, are an impatient lot and into immediate gratification. They see food and they're not big on presentation. They run up to the tables and try to steal what they can, or swing down from the top of the awning covering the table. Volunteer security guards with slingshots and swatters try to keep the monkeys away.

Eventually the food is prepared and set out for the monkeys to eat. 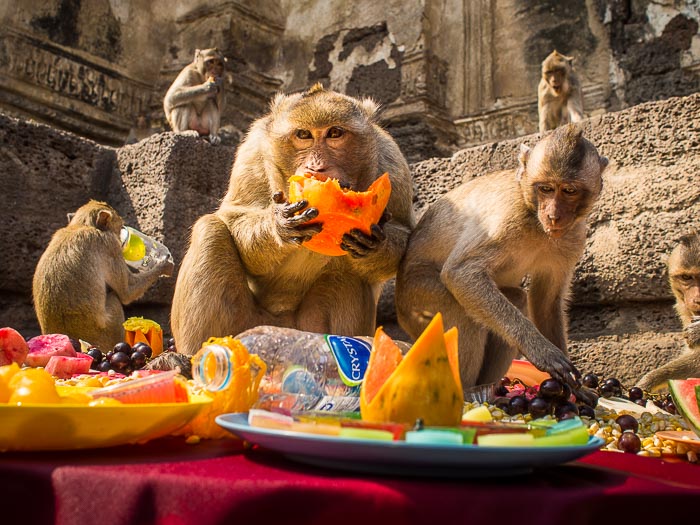 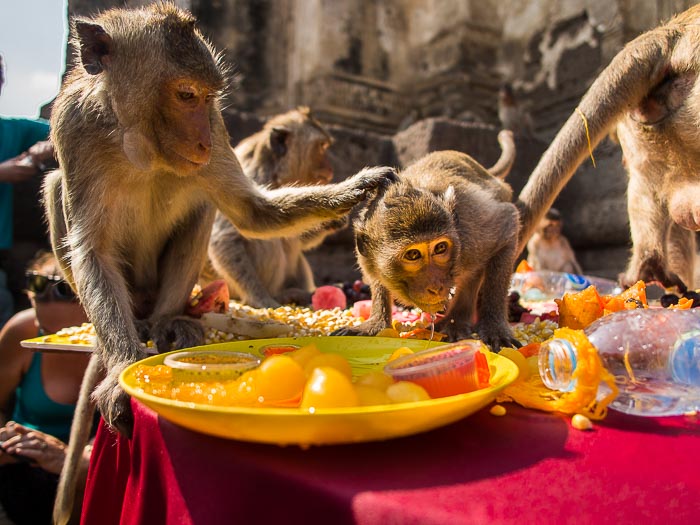 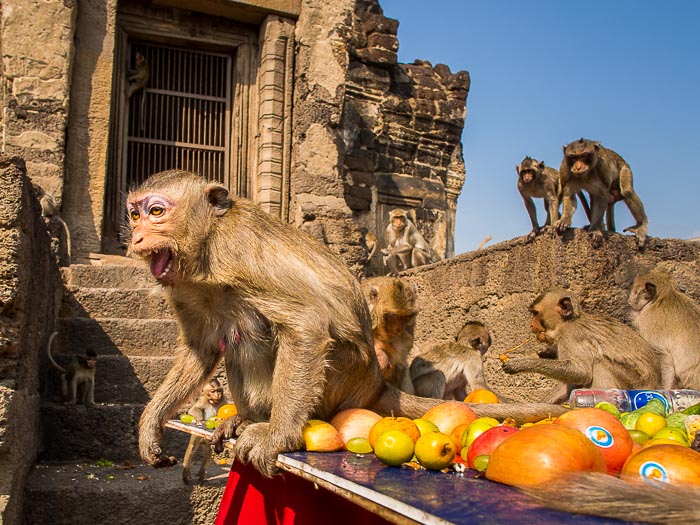 I get the sense that it's all a part of an elaborate game. I never saw anyone actually hit a monkey and the monkeys are so used to the ritual that when they see a slingshot or someone raise a swatter they back off.

The monkeys seem to know where their bread is buttered (metaphorically speaking). They occasionally bare their fangs at each other or get into little monkey fist fights, but they don't seem to bite people (at least not very often).

If you want to see the monkeys of Lopburi there is regular train service to the town. The train station is a few blocks from the Monkey Zone. The monkeys are around all the time and there are some interesting historic ruins around the station. The monkey buffet party is usually the last Sunday of November. 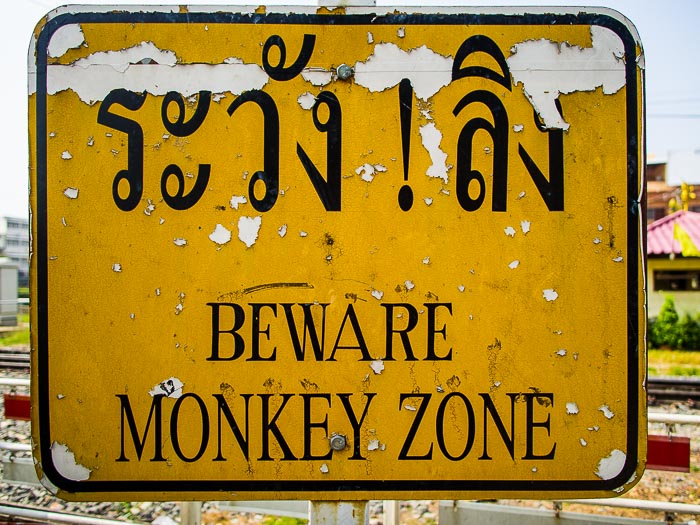 The warning is real. Once you enter the Monkey Zone, you're a target of opportunity for simian pickpockets.

There are more photos of the monkey party in my archive or available from ZUMA Press.
Lopburi Monkey Party - Images by Jack Kurtz
Finally, most of the photos in my archive are available for editorial use or self fulfillment as prints. If you see something you'd like to use or just hang on the wall, click on the "Add to Cart" button and follow the onscreen prompts.
Posted by Jack at 10:30