A Humanitarian Crisis in Myanmar

(Note: I wrote this text to accompany photos used by ZUMA Press in a Z Reportage story released Nov. 11) 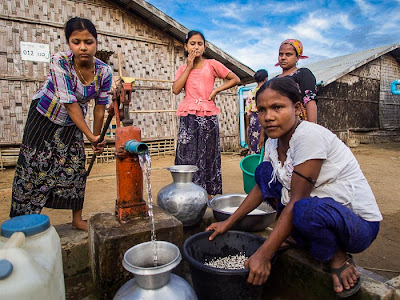 Women draw water from a well in the middle of a group of huts in an Internal Displaced Persons (IDP) camp near Sittwe.

The scars of sectarian violence that tore through Sittwe, a fishing port of about 200,000 on the Bay of Bengal, in 2012 have not healed.

Hundreds of Rohingya Muslims, an ethnic minority that has lived in Myanmar for generations, were killed, their homes and mosques destroyed, when Buddhist led mobs rampaged through this town in western Myanmar (formerly Burma). The mobs were fueled by rumors that Muslim men raped a Buddhist woman.

Some of the mobs were allegedly led by state security officers, who did little to stop the violence.

After the violence abated, the Myanmar government rounded up the Rohingya and forced them into Internal Displaced Persons (IDP) camps a few kilometers west of downtown Sittwe.

More than two years later, they still languish in the camps. More than 140,000 people, mostly Rohingya Muslims, live in the squalid camps. 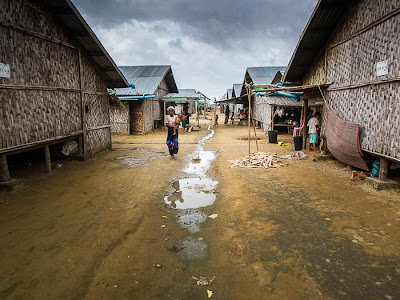 Water runs through the middle of a camp.

The camps lack access to electricity, there is no running water, they rely on water from communal wells, latrines line the edges of the camps and open ditches carry away rain and waste water.

Some food staples like rice and chickpeas are provided by international Non Governmental Organizations (NGO). NGOs also provide some educational opportunities for the children. 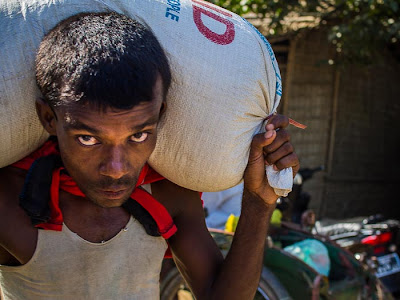 A laborer carries a 50 kilo sack of rice away from a warehouse used by NGOs to store rice and chickpeas.

The NGOs are limited in what they can do though.

Doctors Without Borders (MSF) shut down their Sittwe operations earlier this year because of pressure from government officials and Buddhist mobs in Sittwe that threatened to burn their offices. Some MSF teams from Thailand still work surreptitiously in the camps but most medical care is provided by private clinics and practitioners with no real medical training.

There are no real jobs in the camps. Some families have set up shops and the fishermen who used to sail out of Sittwe and neighboring communities now sail from the camp. 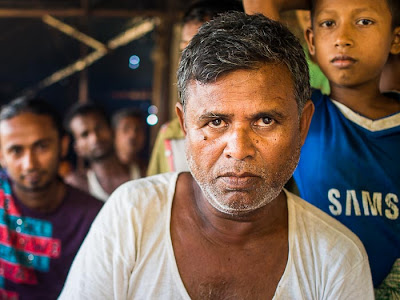 An unemployed man who owned a shop in Sittwe before the violence forced the Rohingya out of the town.

But the shopkeepers aren't allowed to travel into Sittwe to buy new inventory and the fisherman aren't allowed to sell their catch outside of the camps. Instead they rely on Buddhist middlemen who are willing to do business with the Rohingya.

At the root of the crisis is the status of the Rohingya.

The situation shows no signs of improving.

Mohammed Farouk, 44, is a headman in one of the camps. The former businessman now spends his days sitting under a thatched roof listening to people's complaints, knowing there is nothing he can do to help.

Speaking through a translator, he said, "How long can we stay here? We have nothing." Grabbing his own shirt he continued, "We were not allowed to bring anything, only what we were wearing, when they (the government) brought us here. We had to give everything to the Rakhanese (the Buddhist majority ethnic group). They were killing us, and then we had to pay them to let us live."

The men sitting with him nodded in agreement. One said, in English, "We are all jobless now. With no hope."

What few jobs there are menial: selling candies and betel or running small rice stalls. A few lucky people get work with a NGO, but those jobs are very hard to come by.

The lack of medical care is obvious in a small shack that serves as a clinic on the edge of a camp. 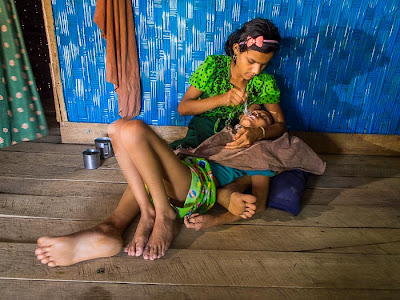 A teenager feeds her brother, who has malaria.

Noor Ar Jun, 16, coos quietly while she tries to feed her brother, Mohhammed Noor, a 12 year old the size of an American 8 year old. Mohhammed has malaria and is too weak to stand or feed himself.

Noor is trying to feed and comfort him while mosquitos and flies buzz around.

Noor said her parents were trying to find food and couldn't care for Mohhammed that day. Her mother was looking for something in the market, her father at the fishing dock.

In another camp, about two kilometers away, Mostoba Hatu, 60 years old but looks 80, sits in a heap clutching a tent pole.

The frail woman collapsed on the way back to her hut. A crowd gathered around and some muttered "TB, TB."

Her daughter came out and said "not TB" then louder, "NOT TB." She said her mother had fevers and could no longer eat and that she would sit in the shade under a NGO office, the only building in the area on stilts, to escape the heat. But without medical care it's impossible to know what exactly was ailing Mostoba.

The heat that drove Mostoba from her hut is one of the defining characteristics of the camps.

The huts are built on the ground next to each other. None have electricity, so fans are impossible, some don't even have windows. This part of Myanmar is always hot and the camps, crowded and dusty, are unbearably hot. The huts' corrugated metal roofs compound the misery, turning the huts into ovens.

The huts are nothing like the Rohingya's traditional homes, which are built  out of thatch and on stilts with large windows. They are designed to stay cool, or at least bearable, in the stultifying Burmese summer. 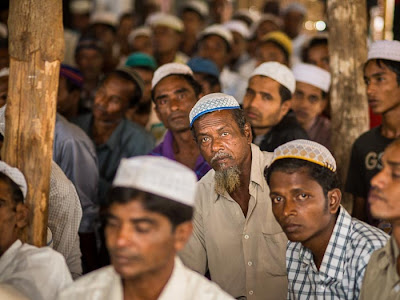 Men at prayers in a mosque in a camp. 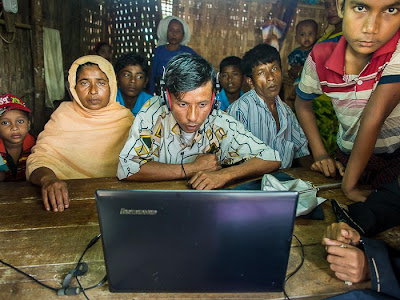 Rohingya gather around a computer to talk to family who escaped the camps to the relative safety of Malaysia.

Further into the camp, a group of men in their 60s and 70s stay cool in the "temporary" community mosque. Built out of thatch, on the ground just off the beach, it has large windows and is less oppressively hot than the huts.

The men, all former fishermen,  pass the time talking about their lives before the violence that drove them here in 2012. 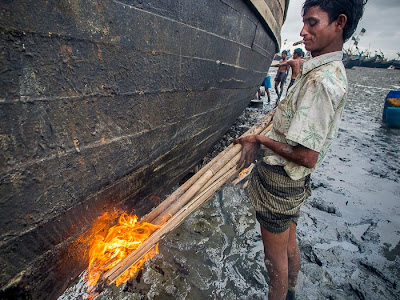 A Rohingya man in a boat yard seals the hull of a wooden boat. 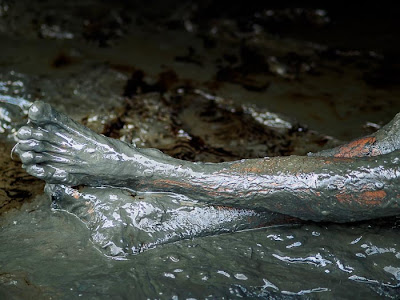 A worker's feet under a boat. The muck is a mix of dead fish, fecal matter, diesel, motor oil and stagnant salt water. 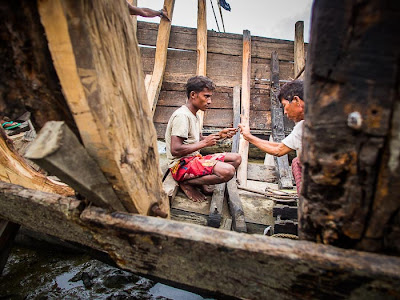 Workers in the hull of a boat.

To the Rohingya, the 2012 violence is a genocide, an existential threat.

Tens of thousands of Rohingya have fled Myanmar on rickety boats made in small factories and shipyards along the coast of the IDP camps.

Making the boats has become one of the few real jobs in the camps.

At a small lagoon next to a camp workers toil on deck when the tide is in but when the tide goes out the lagoon becomes a mud flat and the real work begins.

An army of men slog through the polluted muck, a vile mixture of dead fish, fecal matter, diesel, motor oil and stagnant water, to work on the hulls of the wooden boats.

They melt tar and pitch to waterproof them, jam cotton strings into the cracks between planks in the hull in an effort to further seal the hull.

The boats were once used mostly for fishing but more and more they're being used to haul people from a hopeless life in the camps to Malaysia and the potential for a new life.

Most of the Rohingya who flee on the boats want to make landfall in Malaysia. Malaysian authorities usually give them refugee status and help them relocate to other nations.

But it's a dangerous journey. Boats go off course and end up in Thailand or Bangladesh and neither country is willing to accept the Rohingya. There are storms and pirates prey on the Rohingya. The Thais have been known tow them back out to sea. The Bangladeshis return them to Myanmar.

It's a testimony to the hopelessness of the Rohingya situation that they will risk death making the dangerous sea crossing rather than stay in the camps.

As the sun beats down on the Rohingya in the camps their future is uncertain.

The government of Myanmar shows no interest in letting the Rohingya stay in the only home they've known and officials in neighboring countries are unwilling to take them in.

Myanmar has made tremendous progress on its path to democratization in the last three years but the status of the Rohingya remain an ink blot on that path. 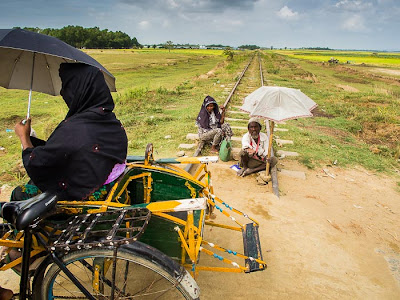 A woman in a bicycle drawn rickshaw taxi passes a blind beggar in the middle of the camps.

There are many more photos of the Rohingya in my archive or available from ZUMA Press.
Burma's Rohingya Muslims Confined to IDP Camps - Images by Jack Kurtz

Finally, most of the photos in my archive are available for editorial use or self fulfillment as prints. If you see something you'd like to use or just hang on the wall, click on the "Add to Cart" button and follow the onscreen prompts.
Posted by Jack at 00:15