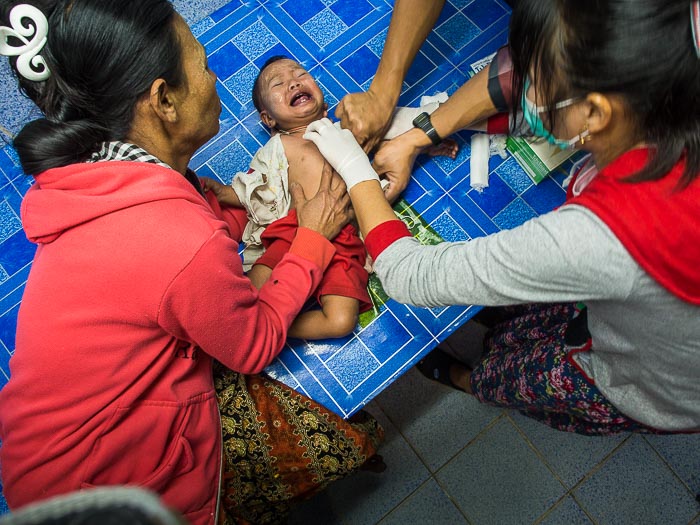 A picture made with my E-P5 and the Olympus 12mm f2 lens at a clinic for Burmese refugees in Mae Sot, Thailand. I held the camera over my head and used the tilting LCD screen to compose the photo and relied on the in body image stabilization to help me with the relatively slow shutter speed of 1/20th of a second.

I've used Canon cameras for as long as I've been a photographer. The first camera I used was a Canon FT-QL, a tank of a camera. The QL stood for "quick load," a Canon innovation that made it easier to load a new roll of film into the camera. We got that FT-QL at the PX in Bangkok in 1967 or so.

Even then, Canon and Nikon were the big two of the camera companies. The others, Minolta, Olympus, Ricoh, Yashica, etc were playing catch up to the CanNik juggernaut. Leica was always in a league of its own.

Through the years I've flirted with other systems. 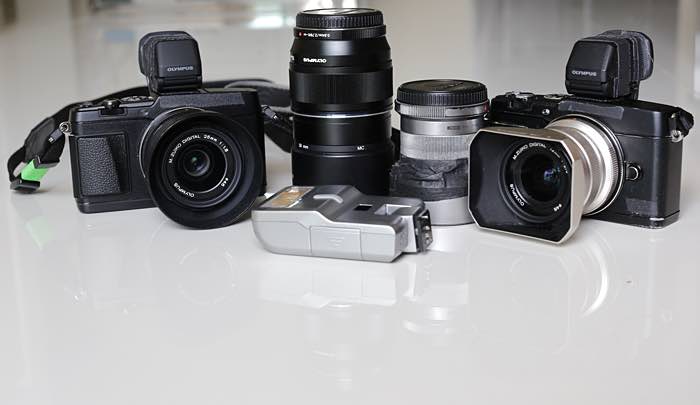 In the 1980s, one paper I worked at issued me Olympus OM bodies and lenses. The lenses were excellent and the bodies nice and small, but I stayed with Canon for my personal gear. In the late 1980s, another paper I worked for issued me Nikon gear, FM2 bodies and a selection of Nikon lenses. They were okay but (and this might be heresy to Nikon fans) they didn't offer me anything the Canons didn't, so I stayed with Canon. (Although I have to admit the Nikon FM2/FE2 are arguably the best looking 35mm SLRs ever made. Nikon nailed the aesthetics of those.) While the Olympus gear was substantially lighter than my Canon gear, the Nikon gear weighed about the same. 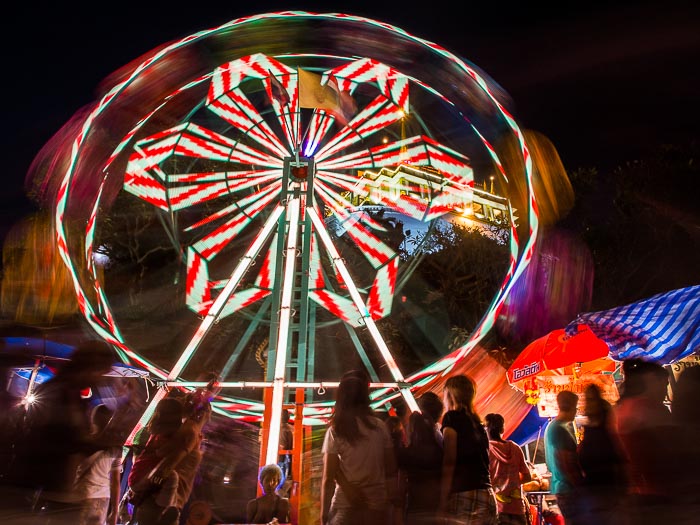 At the Wat Saket temple fair, I would have had to use a tripod if I made this picture with my Canons. The shutter speed was 1.6 seconds at f8, ISO400. I was sitting on the ground, camera braced on my knees hoping the image stabilization would help. It did.

When the digital tsunami swamped the photo world I made the decision to stay with Canon. Digital cameras and lenses are so expensive and complex that the switching systems is not done on a whim (unless you're exceptionally well heeled or enjoy the support of a camera company).

So when I make the decision to switch cameras it's a big deal. Maybe not in terms of global politics but certainly in terms of my personal work. 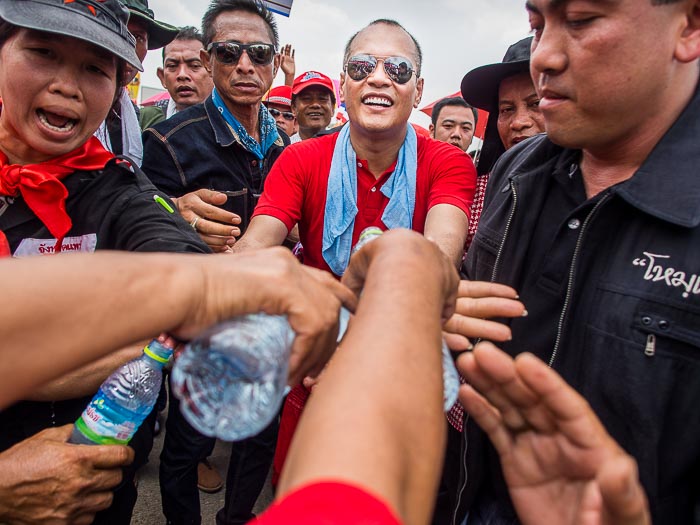 The E-P5 is a great camera for covering politics. It's small and fast. Covering a Red Shirt political rally in Thailand, a Red Shirt leader walked through the crowd, made with my 12mm f2 lens (roughly a 24mm in full frame).

I've been plagued by back problems the last few months and it's just not practical for me to carry the ridiculously heavy 5D Mark III bodies, four lenses, flashes and various doodads. I've been very happy with the image quality and reliability of the Canon gear, this is purely a decision based on health and weight (my health, the cameras' weight).

I've been using Micro 4:3 cameras since 2010 and I've written about small cameras several times. But my back problems forced me to take a hard look at what I was doing and the gear I was carrying.

Let's do the math (the weight of the gear is taken from the manufacturers' specifications pages):

(I don't have to carry a separate flash controller for the E-P5 because it's built into the body. I also have only flash for the E-P5, but the flash is so small and light that it's almost like it's not there at all.)

The Olympus gear I carry weighs about 1/3 what the Canon gear weighs. That's a lot. The Olympus lenses are excellent and almost unbelievably tiny. The slightly bigger 75mm f1.8, in particular, is outstanding. I think it's as good as Canon's 135mm f2 or 200mm f2.8.

(In the interest of full disclosure, the weight of the camera gear is only a portion of what I carry. There are also notebooks, ponchos, light meter, and misc bits of stuff. The weight on that extra stuff hasn't changed, so I am probably still carrying more than I should.) 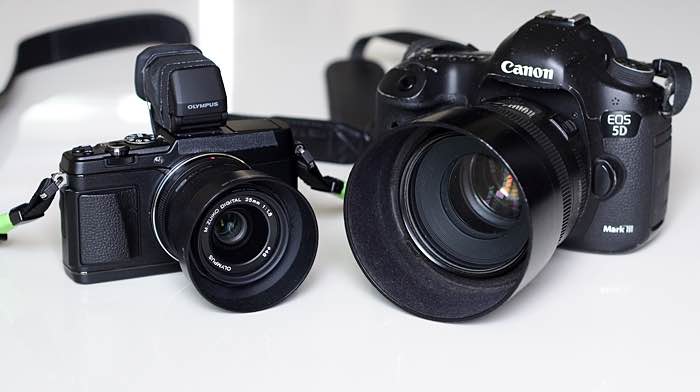 The Olympus gear is Micro 4:3, or a 2X crop compared to full frame. This is great from the weight and portability perspective, less good from the ISO, depth of field perspective.

Larger sensors have better high ISO characteristics because the photosites on the sensor are bigger. This gets into engineering, physics math and a lot of stuff I don't understand. I'm asking you to trust me on this.

But, and this is important to remember, for many people high ISO is over rated. That's not to say it's not important, it is. But I use ISO100 a lot more often than I use ISO1600. I seldom go over ISO3200 and can count on one hand the number of times I've worked at ISOs higher than 6400.

I'm old. When I started photographing in color back in the early 1980s, ISO160 was considered a high ISO. Seriously. High Speed Ektachrome was the fastest available color transparency film. It was an E6 film and could be pushed one or two stops. It was bad at its base ISO of 160. It was dreadful pushed. "Normal" speed film then was Kodachrome 64 (ISO64) or Kodachrome 25 (ISO25) or Ektachrome 64 (ISO 64). Now, most digital cameras don't even go down to ISO 64 and I don't know of any that go down to ISO 25. 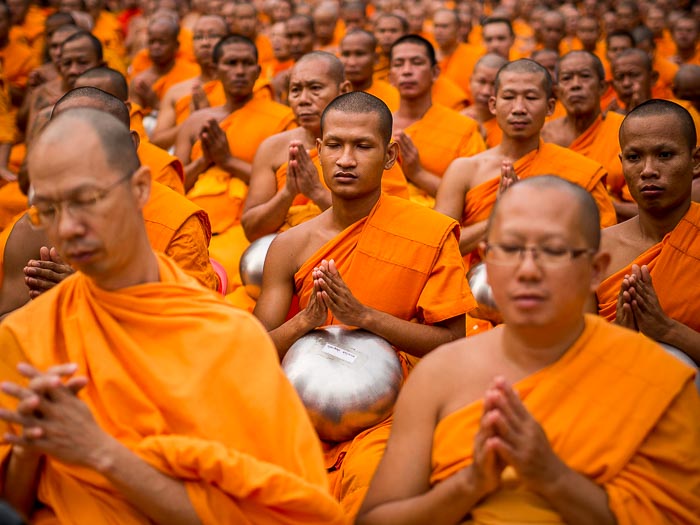 Buddhist monks at a mass merit making ceremony in central Bangkok. Made with the 45mm lens (roughly a 90mm in full frame terms).

(Again, in the interest of full disclosure, this was early in my color photography days. Color films got a lot better at high ISO pretty quickly, but even at the end of my color film photography days "high" ISO meant 800 pushed to 1600, so we're much better off now than we were then.)

Clean high ISO is important to me but the high ISO of modern digital cameras is amazing. I have no problem going to 1600 with the E-P5 and 3200 is usable with noise reduction in Lightroom.  The 5D Mark III has about a 1 to 1.5 stop advantage at high ISO, I just don't routinely need those super high ISOs. If I did a lot of sports or worked at high ISO a lot this would be a bigger deal to me.
Finally, Olympus' in body image stabilization is excellent and makes up for some of the high ISO deficit. I can handhold the Olympus cameras at shutter speeds that would either force me into using a tripod or higher ISO on the Canons.

The other big difference is depth of field control. I really like working with my Canon lenses at f1.4 or 1.2 or 2, "wide open" or close to it. The shallow depth of field and large sensor create a great look that I can't equal with the Olympus, which has a smaller sensor.

Because of the math, f1.8 on the Olympus 25mm has about the same depth of field as the Canon 50mm has at f3.5. F3.5 might be a wide f stop for some photographers, especially zoom users, but for me it's the middle of the pack. I still work at f1.8 or f2, I've just had to get used to not having the same super thin depth of field I had with the Canons.

The glass is half full take on this is that I have more photos in focus. As good as the autofocus is on the 5D Mark III (and it is very good), working at 1.2 or f1.4 means missed focus by only a few inches can throw your picture unusably out of focus. There's a greater fudge factor with M4:3 because it has more depth of field at the same f stop.

Those are some of the tangible issues with using Micro 4:3. There's also the intangibles. When I use the Canons people the people I photograph react differently to me. They are stiffer, more formal. When I use the Olympus, probably because it's so much smaller and less intimidating, people don't take me as seriously, which I prefer.

I am keeping the Canon gear for the time being, just in case I have to cover an event that's a bad match for the Olympus kit (sports for example) but now when you see me on the street chances are I'll be working with the little Olympus gear rather than the Canon gear.


Finally, most of the photos in my archive are available for editorial use or self fulfillment as prints. If you see something you'd like to use or just hang on the wall, click on the "Add to Cart" button and follow the onscreen prompts.