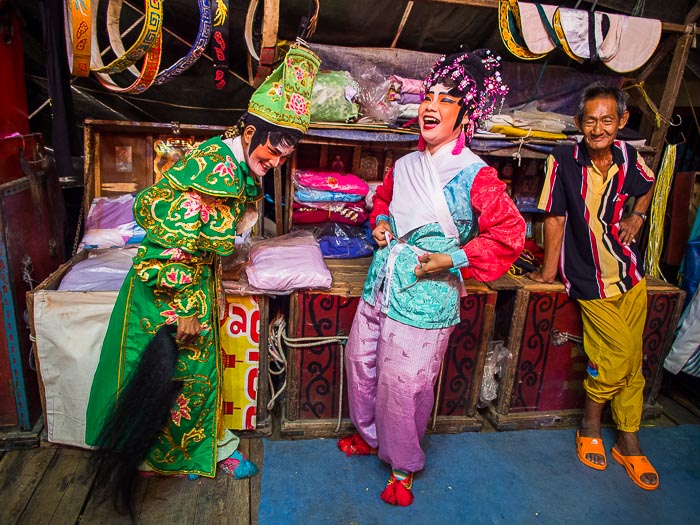 Performers at a Chinese opera wait for the evening performance to start at a small shrine in Bangkok.

Most of the stories I work on are ones I assign to myself. I read something in a local newspaper or stumble on something on the internet that piques my interest, do some research and start photographing. Sometimes it's a news event, like the exodus (and subsequent return) of Cambodian migrant workers in Thailand. Sometimes it's an issue related story, like drought in Thailand. Other times, it's just fun stuff. Sometimes it just takes a lot of "sticktoitiveness" to get the story done.

Chinese opera definitely falls into the fun category. This is Ghost Month in Chinese communities around the world. Thailand has a large Chinese community and Chinese holidays, like the Chinese New Year or the Vegetarian Festival, are usually cause for a big celebration here. 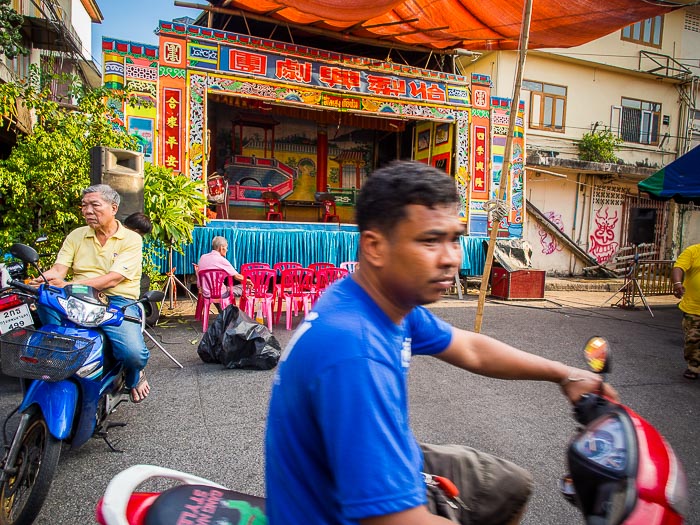 A man rides his scooter past the stage for the Chinese opera.

Chinese opera, called "ngiew" in Thailand, is popular and I thought that Ghost Month would be a great opportunity to photograph some Chinese opera. The problem with photographing Chinese opera, though, is finding one. It's not that the operas are secret, but they're held at small Chinese shrines and temples and they are not usually advertised. They're as much religious as they are entertainment and announcement of a coming Chinese opera is usually limited to posters in the temples. The posters are frequently in Chinese, which for me is a problem because while I don't read Thai I can get it translated. But Chinese? It's all Greek to me.

I've photographed a couple of Chinese operas since coming to Thailand. If I can, I collect contact information from every opera I go to, but it's always been a challenge to pin down the exact time and location of a Chinese opera. 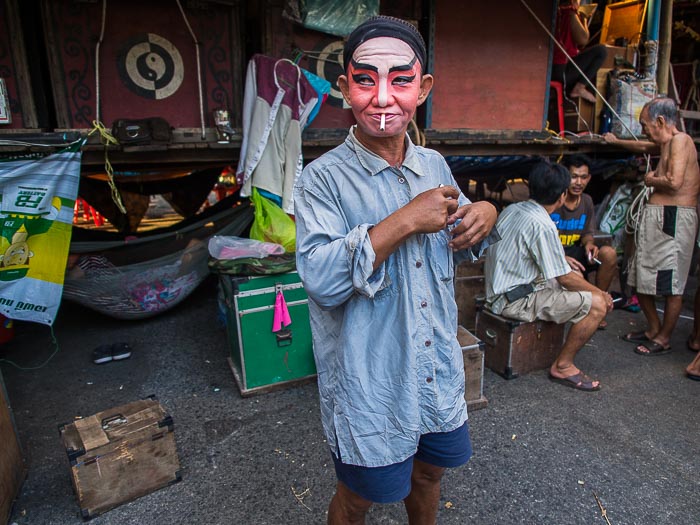 A performer smokes a cigarette before the show.

So I put on my walking shoes and went on a research mission. I went to a Chinese shrine on the riverfront in the Dusit district. No one in the temple spoke English but iPhone to the rescue. I showed people in the temple pictures I had on my iPhone from other Chinese operas I photographed and used the Translate app to ask about opera. People in the temple liked the photos and thought the app was amusing. But said no, they had no opera for Ghost Month. They did say they had one coming in December. I added that to my calendar but left disappointed. 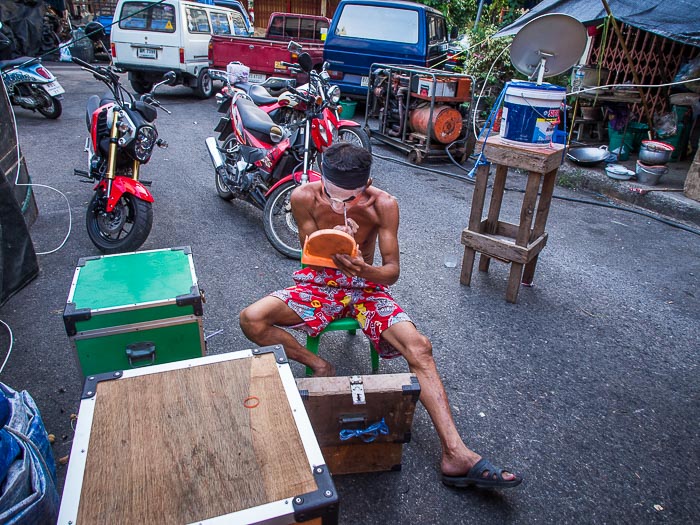 There are no dressing rooms at this opera. Performers put on their makeup where ever they can find room, sometimes in the middle of the street.

Then I went down to Chinatown and Talat Noi and wandered through the alleys and shrines looking for evidence of a Chinese opera. It was nice but fruitless stroll. I found no operas.

My last stop was a small shrine in a neighborhood behind Chulalongkorn University, between MBK shopping center and Hua Lamphong train station. My opera "source" said there had been Chinese operas in the neighborhood for Ghost Month in years past but the neighborhood was being torn down (urban renewal Bangkok style) and she wasn't sure if the neighborhood shrine was still open.

On my first visit the shrine was deserted. It was open, candles and incense burning inside, but there was no one there and no sign of a coming opera. Although the shrine is still open, the neighborhood around it is being razed to make way for condominiums and shopping malls, which I took as a bad sign.

On a whim I went back to shrine over the weekend. There were a couple of new posters in the shrine in Chinese but more importantly there was a charming woman who thought it was quite nice that a foreigner had wandered into her temple. (This is way, way off the tourist trail.) I started the whole iPhone translate routine of asking about Chinese opera and she said, "you want to photograph a Chinese opera?" In English.

I told her that I did, that I was a journalist working on a story about Chinese opera and Ghost Month and asked if she knew of any Chinese opera. She said her shrine was having a Chinese opera in 18 days. That didn't seem right because it would take us out of Ghost Month so we hunted down a calendar and I counted ahead 18 days. While I was counting, she stopped me at August 18 and said "Here. In 18 days." And I said, "you mean on August 18?" She pointed to the poster (which was in Chinese) and said, "yes, August 18." The opera starts with performers making an offering in the shrine.

Yesterday I went down to the shrine. There was a small stage blocking the street in front of the shrine. It was the Chinese opera I was looking for and the performers couldn't have been nicer. When I started photographing they thought I was just going to make a couple of snapshots and leave. After about 90 minutes, they realized that I was in this for the long haul. So they pulled up a chair for me, offered me dinner and regaled me with stories about their lives in greasepaint. Of course, no one spoke English and I speak neither Thai nor Teochow (Chinese) so our conversation was limited to my laughing and nodding but it was a great evening and good experience. All thanks to a healthy amount of sticktoitiveness. 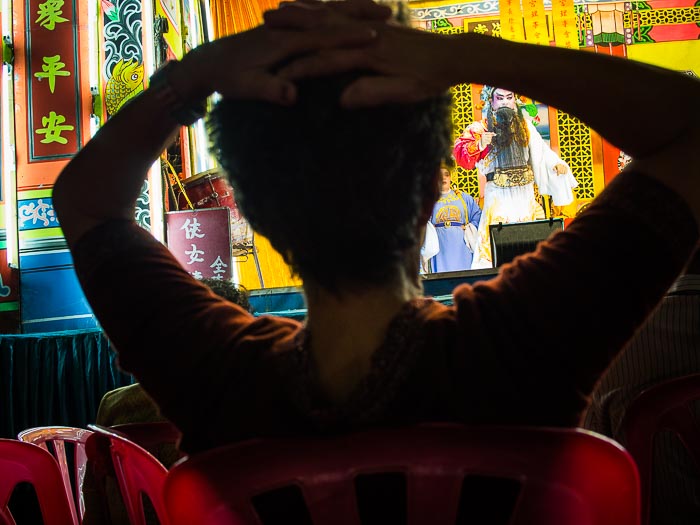 A member of the audience relaxes while she watches the opera.

There are more photos from the Chinese opera in my archive.
Chinese Opera Marks Ghost Month - Images by Jack Kurtz
Finally, most of the photos in my archive are available for editorial use or self fulfillment as prints. If you see something you'd like to use or just hang on the wall, click on the "Add to Cart" button and follow the onscreen prompts.
Posted by Jack at 08:08