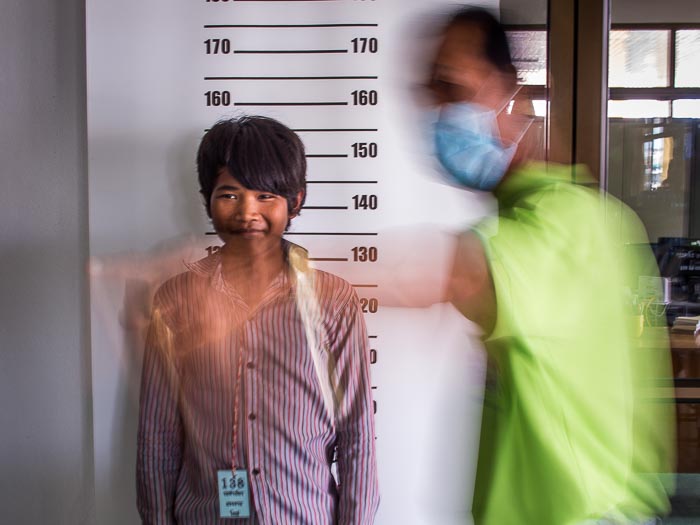 A Thai immigration worker (right) helps a Cambodian migrant through the process of registering at the One Stop Service Center in Aranyaprathet.

In June, hundreds of thousands of Cambodian migrant workers fled Thailand, fearing a crackdown by the Thai military junta against undocumented workers. By some estimates, more than 220,000 Cambodians flooded back into Cambodia in a one week period.

No one seems to know exactly how many Cambodians live in Thailand, estimates range from 200,000 to 300,000. So depending on who you believe, that's every Cambodian in Thailand or most of the Cambodians living in Thailand. In any case it's a huge number.

Most of the Cambodians crossed back through Poipet, a small (population 90,000) dusty town known for gambling and easy access to Angkor Wat. Poipet's population more than doubled during the access. 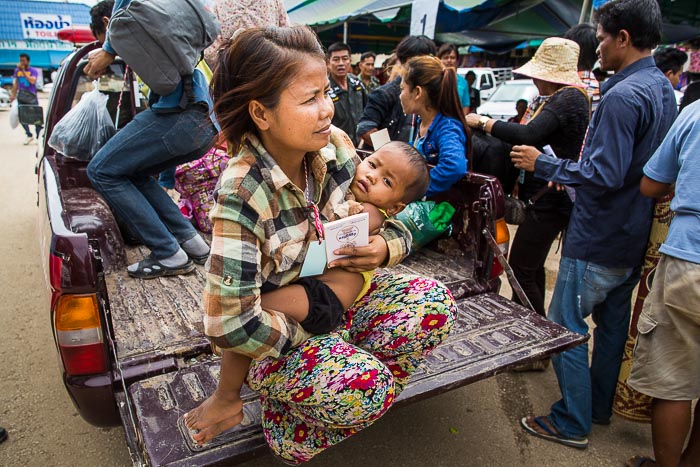 A Cambodian woman and her son arrive at the one stop service center in Aranyaphratet. Thai police were shuttling Cambodian migrants from the border to the immigration office, about one kilometer from the border.

I covered the Cambodian exodus in June and went back to Aranyaphrathet Wednesday to photograph the their return.

In order to qualify for entry into Thailand, migrants had to show that they had a job waiting for them. They weren't being admitted to look for work. There are brokers on the Cambodian side of the border connecting job seekers with job providers. 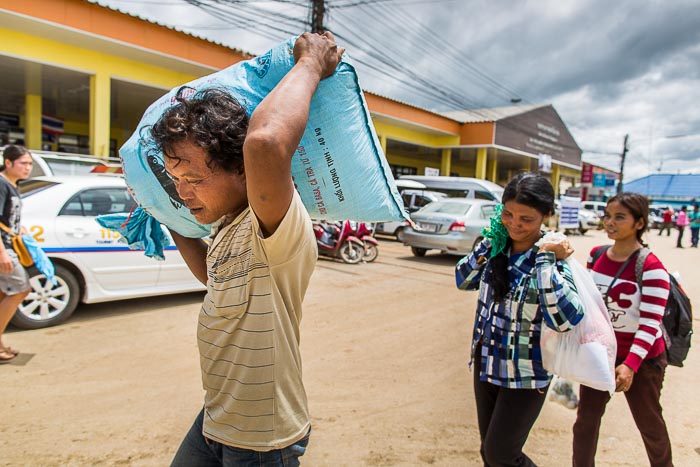 A Cambodian family leaves the one stop center after getting their temporary Thai ID card.

Thai immigration authorities put up shade structures in the parking lot of their office. Hundreds of Cambodians sat quietly in the shade, munching on snacks, waiting to be called in for an interview.

In the office, Thai officials interviewed the migrants, verified that they had jobs waiting, fingerprinted and photographed them and then issued them temporary ID cards. The actual process to get a temporary ID only took a few minutes but there were so many people waiting that many people will spend the entire day waiting.

The one stop center in Aranyaphratet is temporary. It opened on June 26 and will close on July 25. Officials said they see more people every day. The first week they opened in June, about 200 people a day came through. They expected more than 800 to come through Wednesday. As word spreads about the program in Cambodia and more Cambodians get travel documents and guaranteed jobs the center will become busier.

There are more photos from Aranyaphratet in my archive or available from ZUMA Press.
Cambodian Migrants Return to Thailand - Images by Jack Kurtz
Finally, most of the photos in my archive are available for editorial use or self fulfillment as prints. If you see something you'd like to use or just hang on the wall, click on the "Add to Cart" button and follow the onscreen prompts.