Not a Club You Want To Be In 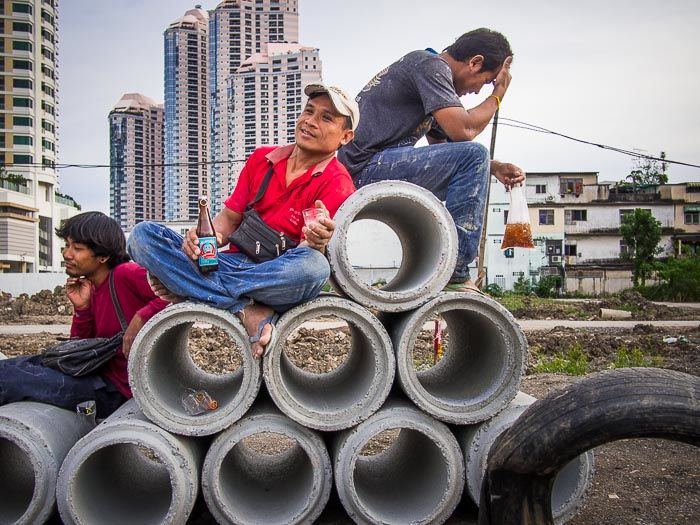 Cambodian construction workers relax on a pile of water mains on a job site in central Bangkok.

It's been a rough couple of months for Thailand.

Violence inspired by the anti-government protests grabbed headlines and sullied the reputation of the "Land of Smiles."

Then the army staged a coup.

The final straw was Thailand's being demoted to Tier 3 status on the US State Department's Trafficking in Persons Report (TIP) for allowing human trafficking, slavery and gross human rights abuses of immigrants. Tier 3 status is reserved for the worst offenders - Zimbabwe, North Korea, Saudi Arabia and Uzbekistan are some of the other Tier 3 countries. (Neighboring Malaysia's status was also downgraded from Tier 2 - Watchlist to the Tier 3. Like Thailand's downgrade, Malaysia's was automatic based on four years on the Watchlist.)

Thai officials are outraged at being on the Tier 3 list. At a press conference Saturday morning, Mr. Sihasak Phuangketkeow, Permanent Secretary for Foreign Affairs and Acting Minister of Foreign Affairs, said Thailand did not belong on Tier 3 status. He pointed out that Thailand has prosecuted nearly 400 people in the last year for human trafficking and secured more than 200 convictions. He added that, "Tier 3 is for countries doing nothing. We have made an earnest effort. I would ask the US to go back and reconsider."

Immigration in Thailand, like the United States, is complicated.

Immigrants work the construction sites that dominate the Bangkok skyline. They crew the fishing boats that sail the region's waters. Migrant farm workers tend the fields that feed the world.

I've had more than one Thai employer tell me they couldn't find Thais willing to work in the fields or crew the ships or scramble across the scaffolding. One said "Thais just want to work in air conditioned malls in Bangkok." Close your eyes and it's easy to imagine you're talking to an American farm manager talk about hiring field hands or factory owner talking about hiring line workers. 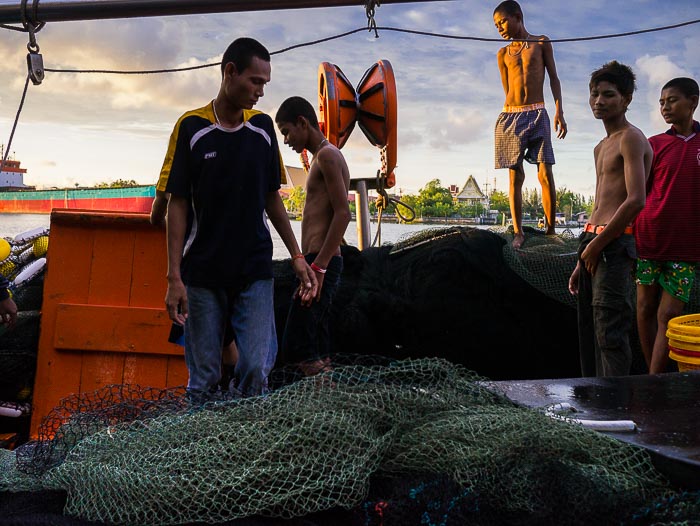 Burmese crew on a Thai fishing trawler in port in Samut Sakhon.

Thailand's immigration woes grabbed the headlines two weeks ago, before the TIP report was released, when the UK newspaper the Guardian published a scathing report on slavery in the Thai fishing industry. Reports of slavery in the Thai fishing industry are not new, but the Guardian piece alleged that slavery was systemic and wide spread and connected large US and European retailers like Wal-Mart, Tesco, Carrefour and Costco to the slave trade through the shrimp they sold. (I encourage you to follow the link and read the Guardian piece.)

Last week, the immigration issue in Thailand blew up again when nearly 200,000 Cambodian immigrants fled Thailand, en masse, and returned to Cambodia. It was a mass migration not seen in Southeast Asia since the dark days on the Killing Fields. 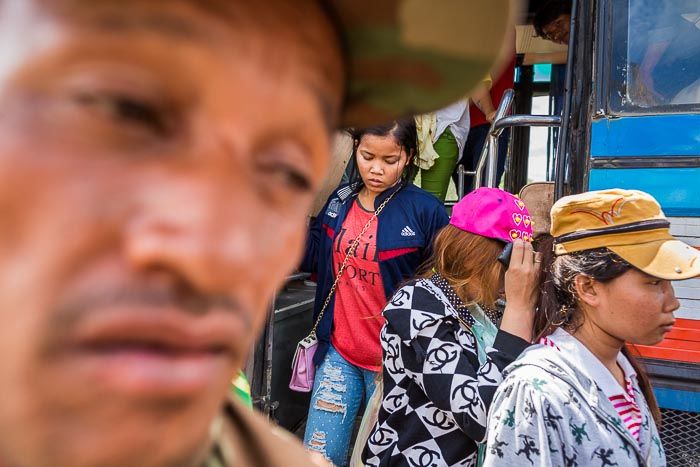 Cambodians get off a bus from Thailand after fleeing a feared crackdown.

The exodus went on for nearly a week.

By some counts more than half of all Cambodians living in Thailand have left. There are two construction sites on our street in Bangkok that have been quiet since the Cambodian exodus. Construction trade groups in Thailand are saying they can't find workers to replace the Cambodians and their sites are idle. The Thai junta has promised to help match workers up with vacancies but it takes time to get the system up and running. (Interestingly, Gen Prayuth-Chanocha, commander of the junta and effectively Thailand's head of government, wrote a dissertation in 2008 that identified migrant workers and undocumented persons as one of four urgent and immediate threats to Thai society.)

I've been photographing immigration related stories in Thailand since 2009. I was drawn to the issue because of the similarity between immigration here and in the US. Here in Thailand and in the US immigration is an issue that won't go away - there are a lot more similarities than there are differences.
Thailand Accused of Abusing Immigrants - Images by Jack Kurtz
Finally, most of the photos in my archive are available for editorial use or self fulfillment as prints. If you see something you'd like to use or just hang on the wall, click on the "Add to Cart" button and follow the onscreen prompts.