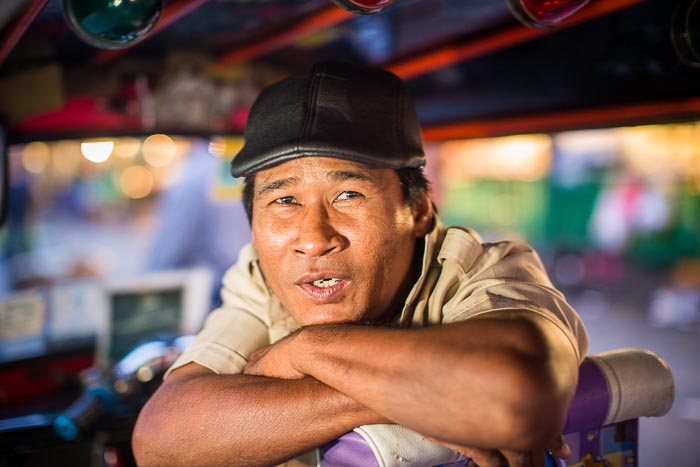 A portrait of a tuk-tuk driver in the Bangkok flower market. The pose, the light, the direct look into the camera all serve to tell the reader that this is a portrait.

Thomas Edison is reported to have said, "Hell, there are no rules here, we're trying to accomplish something," when a lab assistant asked him about rules in the lab. There are a lot of rules in photojournalism - we don't set up or fake photos, we don't use software (or, in the old days, the enlarger) to change the truth of what we're photographing. Our captions, like our photos, have to be truthful.

But understanding the rules, and how to work within them, is the mark of an experienced photojournalist.

The cardinal rule, for example, is that we don't set up or fake a photo. But sometimes when we're working for a newspaper or a magazine we get sent to assignments where there is no photo to be made.

For example, we might get assigned to photograph a citizen who saved a baby from a burning building. The baby is in the hospital and the fire was three days ago but it's still your job to come back with a picture.

Under these circumstances it's appropriate to make a portrait of the citizen, at the scene of the fire if possible, in some other setting if not.

The difference between setting up a fake photo and making a portrait of the citizen hero is intent. To pose the citizen in front of a burning building, running to the camera holding aloft the saved infant would be to mislead the reader into believing the photo is "real."

A portrait, with the citizen hero in front of the building, lit with strobes created in such a way that the photo is clearly not a found moment is still truthful and accomplishes your assignment of making a photo of the hero citizen.

W. Eugene Smith was one of the pioneers of photojournalism. He produced an amazing body of work throughout his career that inspired thousands of photographers (including me). His essay on the Spanish village of Deleitosa is just one of his standouts. He also regularly violated basic tenets of photojournalism. I doubt that he would be employable in today's world.

Around 1956 (the exact date is unknown), Philippe Halsmann, the great portrait and fashion photographer, interviewed Smith. Their rambling conversation visited many of the milestones in Smith's career including a discussion of staging photos.

Halsman asked Smith, "Why do you break this basic rule of candid photography?" (In reference to staging photos.)

Smith replied, "I didn’t write the rules — why should I follow them? Since I put a great deal of time and research to know what I am about? I ask and arrange if I feel it is legitimate. The honesty lies in my — the photographer’s — ability to understand."

Today staging documentary photos is strictly prohibited. Most news organizations have a written policy against it. But that was then and this is now.

Finally, most of the photos in my archive are available for editorial use or self fulfillment as prints. If you see something you'd like to use or just hang on the wall, click on the "Add to Cart" button and follow the onscreen prompts.
Posted by Jack at 00:00