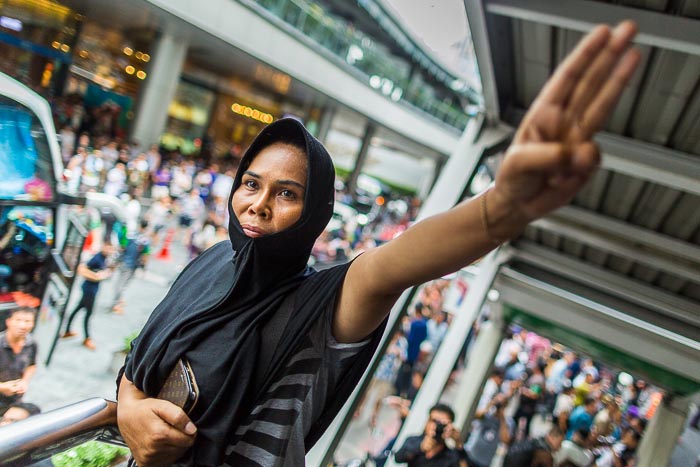 A woman holds up the three fingered salute from the "Hunger Games" during a flash mob protest against the junta at Terminal 21, a shopping mall in Bangkok.

The Thai army is trying to be proactive in controlling the protests against the coup. Last week, after days of protests in Victory Monument, the army struck back by shutting down the area and denying protestors a venue. The result was a traffic jam that was epic even by Bangkok standards. But no protest took place so it's a win.

There was supposed to be a protest Sunday, June 1, at the McDonald's in Ratchaprasong. It was widely advertised on social media and talked about for days in the traditional media.

The army was very proactive. The National Council for Peace and Order (NCPO), the official name for the ruling junta, announced that Ratchaprasong, one of the busiest shopping districts in Bangkok, would be shut down on Sunday. The BTS Skytrains wouldn't stop in Ratchaprasong stations, roads leading into the area would be closed, the malls would be closed and there would be a zero tolerance policy towards protestors. 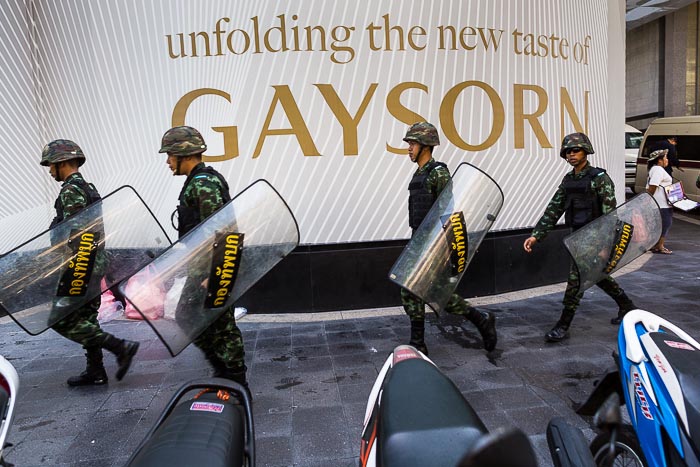 Predictably, no protestors showed up.

Instead, organized by SMS, tweets and messages on Facebook, several hundred posters went to Terminal 21, in the Asok intersection. They hung around in small groups until about noon when they started chanting "Election!" and "Freedom!" and displaying signs against the coup. Then they started using the three fingered salute from the Hunger Games series. According to the Associated Press,  the salute symbolizes rebellion against totalitarian rule. 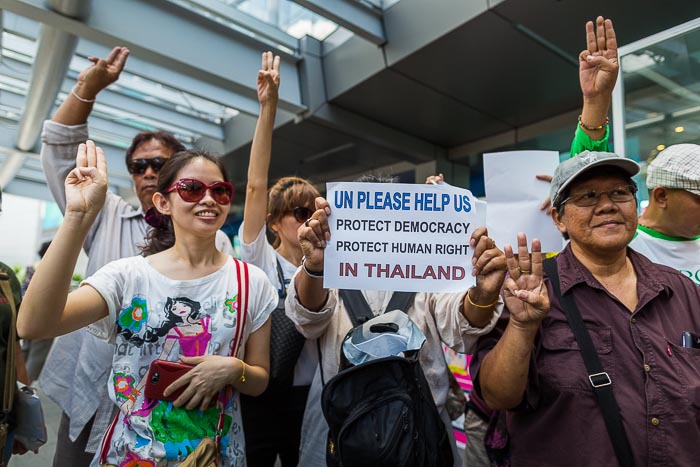 People stand in front of Terminal 21 displaying the salute from the Hunger Games.

After some chanting and saluting the crowd started to break up. That was when the police came. A single officer in uniform and a couple of plainclothes officers tried to arrest a single protestor. They chased him into the mall and other protestors closed ranks to protect the wanted man. The police started chasing protestors through the packed mall with media in tow while shoppers looked on. It was bedlam.

After a few minutes the police gave up and left the mall. Soldiers and armed humvees arrived. They tried to surround the mall (a difficult task since tour busses were still dropping off tour groups and the Skytrain was still bringing shoppers into the mall) and eventually ordered it closed. This brought more people out to the street. The chanting and saluting started again. A few people left the mall, ran across Sukhumvit Road and chased away some of the army officers. 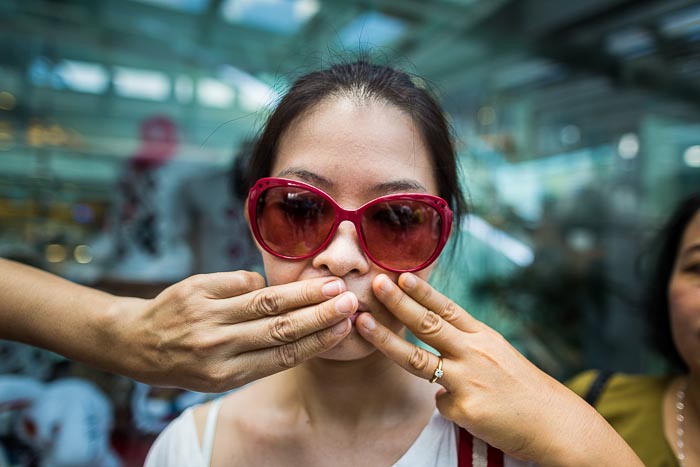 A Thai woman, helped by her friends, protests the loss of free speech during the anti-coup flash mob at Terminal 21.

There weren't very many protestors at Terminal 21. Probably fewer than 200, but it was packed with shoppers. Protestors were nearly as successful at tying up traffic in central Bangkok as Shutdown Bangkok was. Thanks to the army's proactive strategy, Thursday and Friday protestors brought traffic to a standstill around Victory Monument without raising a single hand or voice.

Sunday they shut down Ratchaprasong early without risking confrontation and then showed up unexpectedly at Terminal 21 where just a few protestors caused as much confusion as Suthep's masses did in January. 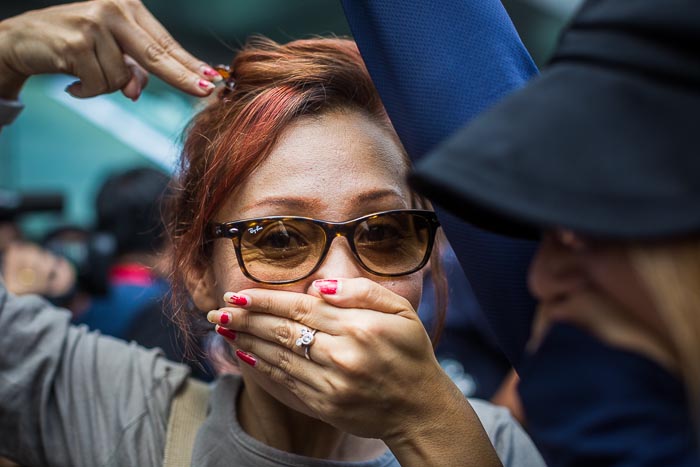 A protestor covers her mouth and pretends to have a gun pointed at her head to illustrate the loss of free speech since the coup.

The protestors seem to be taking on a strategy of playing cat and mouse with the army. Announce a protest in one place, wait for the army to prestage there and then go to another place. There are no public leaders, so there's no one the army can arrest. There's no head to chop off (metaphorically speaking) and the army can't control social media (social media companies have so far refused to meet with NCPO). These are flash mobs and short of shutting down the internet in Thailand the army is going to have a very hard time controlling them.

There are more photos of Sunday's protest in my archive or available from ZUMA Press.
Coup Protests Close Terminal 21 - Images by Jack Kurtz
Finally, most of the photos in my archive are available for editorial use or self fulfillment as prints. If you see something you'd like to use or just hang on the wall, click on the "Add to Cart" button and follow the onscreen prompts.