What is in a name 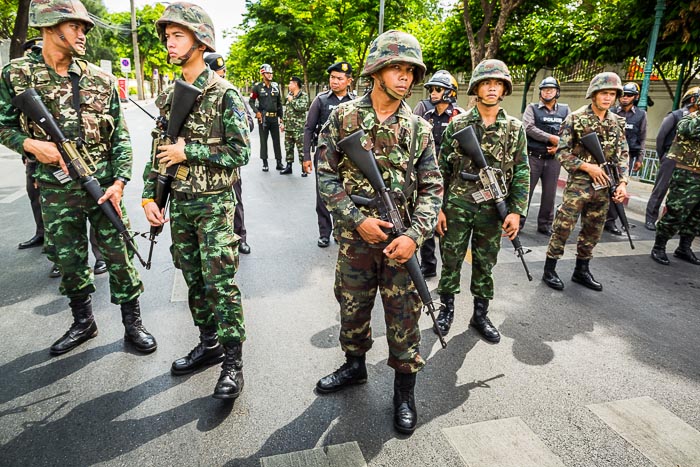 Thai soldiers block a street in Bangkok after the army said that on second thought it was not martial law, that it was a coup.

File this in the "I Told You So" drawer. What was originally called "Martial Law" morphed into a full blown coup in about 60 hours.

General Prayuth Chan-ocha summoned most of the national civilian political leadership in Thailand to a meeting at the Army Club on Wednesday (including the Pheu Thai leaders, the Democrats leaders and Suthep and his allies), about 30 hours after the declaration of martial law. Some politicians were apparently apprehensive about meeting with the generals under the circumstances so Gen. Prayuth promised immunity and that nobody would be arrested at the meetings Wednesday. 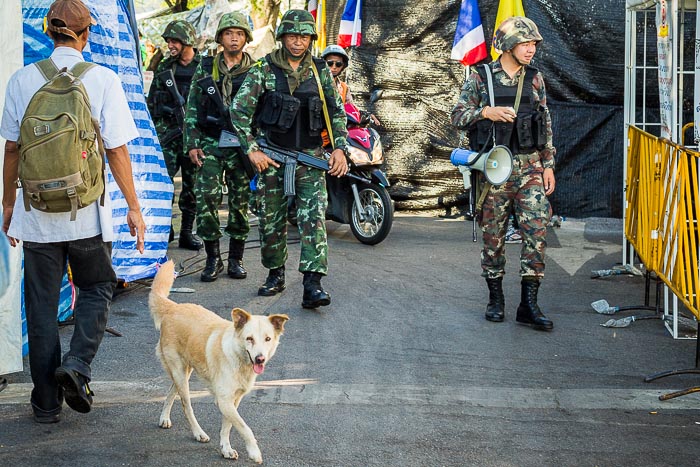 The talks Wednesday didn't have any results so they were continued into Thursday. Nothing came of the meetings Thursday, so the General arrested all of the politicians as the meeting broke up Thursday afternoon and declared the armed forces in charge.

About 4.30PM we went from martial law to coup. The elected Pheu Thai civilian government (which, admittedly, was barely functioning) was dissolved and the constitution (called a charter here) was suspended. A 10PM - 5AM curfew was declared, effectively shuttering Bangkok's infamous nightlife.

TV stations were ordered off the air, journalism outlets were given sweeping orders on what they could and could not report, gatherings or more than five people for political reasons were prohibited and so on. 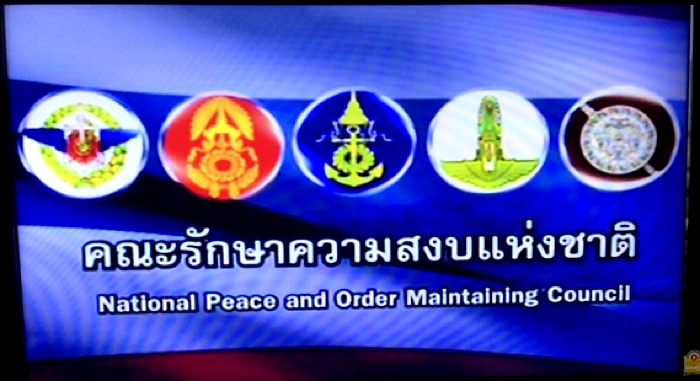 As boring as watching a test pattern from the 1960s. What Thai television is showing. This is from a cartoon network.

I went out Thursday night in search of a signs of a coup. It was chaos, not in a panicked zombie apocalypse way but in a weirdly orderly evacuation way. Everyone was trying to get home before the curfew. The roads were gridlocked, the Skytrain was jammed. Some of the stations were so crowded people couldn't get into the station to get to the platform. The platforms were so crowded people on the escalators couldn't get off and had to sort of walk in place until Skytrain workers turned off the escalator. Then they just stood there.

I ended up on Soi Cowboy, one of Bangkok's "adult entertainment" zones. The party on Soi Cowboy usually starts about 2PM and goes until 4AM. Thursday the party was over by 6.30PM as workers tried to go home and inconsolable punters cried into their beers while waitresses rolled up the bars. 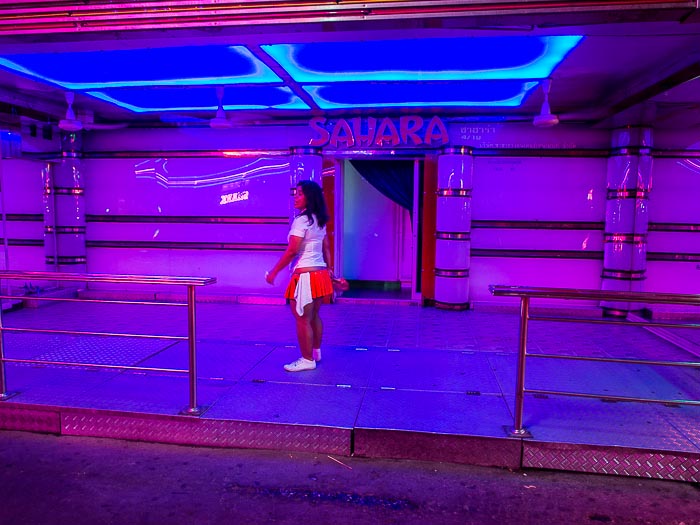 A waitress at the Sahara closes up the joint.

The TVs on Soi Cowboy, normally tuned into sports channels were running news and announcements from the National Peace and Order Maintaining Council (NPOMC), which is what the new government is calling itself. 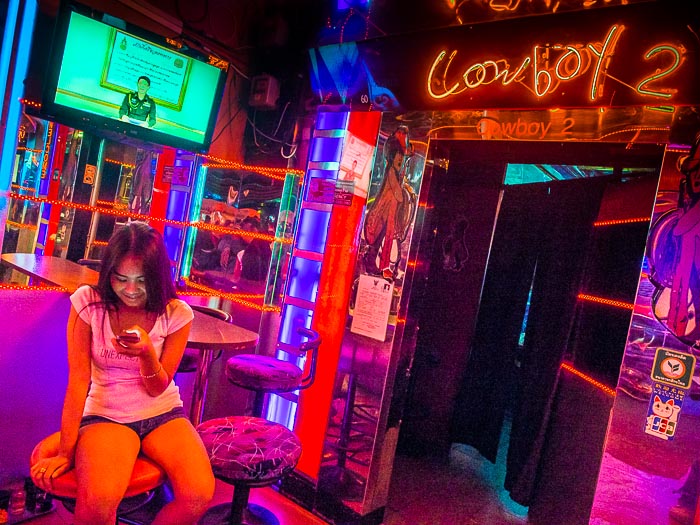 A worker at Cowboy 2 checks her phone while the TV broadcasts NPOMC news.

Friday morning, I got up early to do a Skype interview with Canadian television, then I headed out to see how the City of Angels fared overnight.

Thursday night into Friday was calm. There were lots of soldiers around the PDRC protest site on Ratchadamnoen Ave, but they most of them were helping protestors load up their trucks and motorcycles to go home. 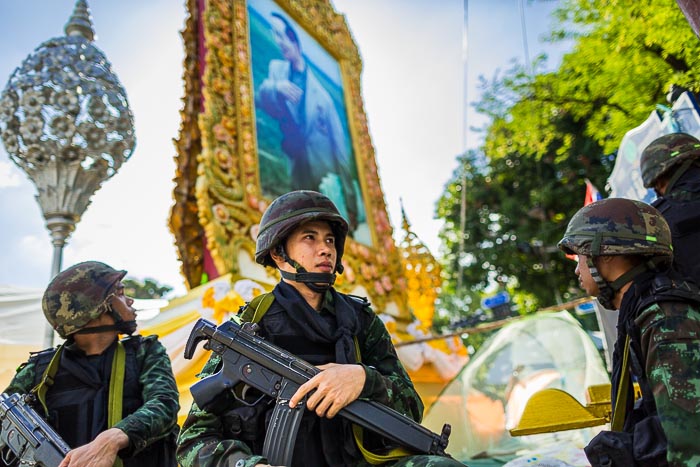 Soldiers on Ratchadamnoen under a portrait of the King, Bhumibol Adulyadej.

Civilian politicians not arrested Thursday were ordered to report to military authorities Friday. There was a media mob scene in front of the army offices set up to handle politicians, every vehicle coming in was mobbed by photographers trying to get pictures of whoever was in the vehicle. Heavily tinted windows meant most of the occupants were unrecognized. 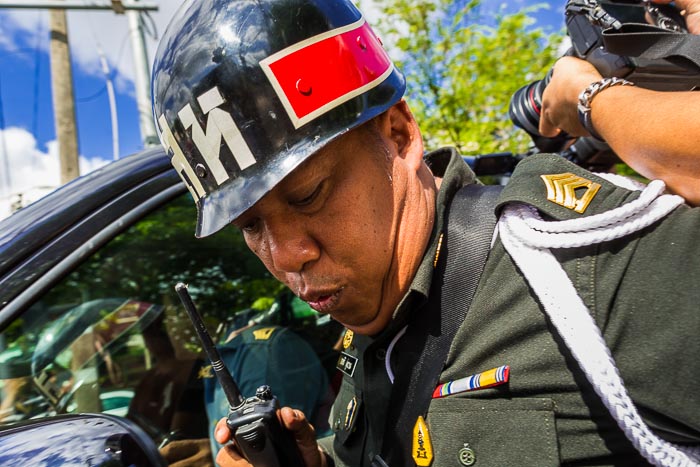 A Thai military policeman tries to hold back photographers crowding a van bringing politicians into the army compound. 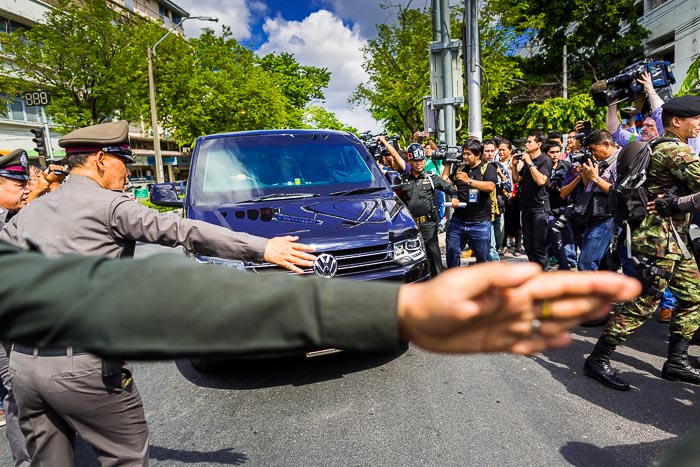 Photographers crowd around a van bringing politicians into the army compound.

Foreign reaction to the coup has been predictable. Human Rights Watch has warned that human rights in Thailand are in "free fall." Most European governments have condemned the coup and US Secretary of State John Kerry said US relations with Thailand will be reviewed as a result of the coup. The US Embassy in Bangkok has warned travelers to reconsider "nonessential" travel to Thailand (but American Restaurant Week in Bangkok goes on!)

There are more photos of the first day of the coup in my archive or available from ZUMA Press. I've also created a gallery of all of the photos related to martial law and the coup.

Thai Army Seizes Control in Coup - Images by Jack Kurtz
Finally, most of the photos in my archive are available for editorial use or self fulfillment as prints. If you see something you'd like to use or just hang on the wall, click on the "Add to Cart" button and follow the onscreen prompts.