Monday at the Monument 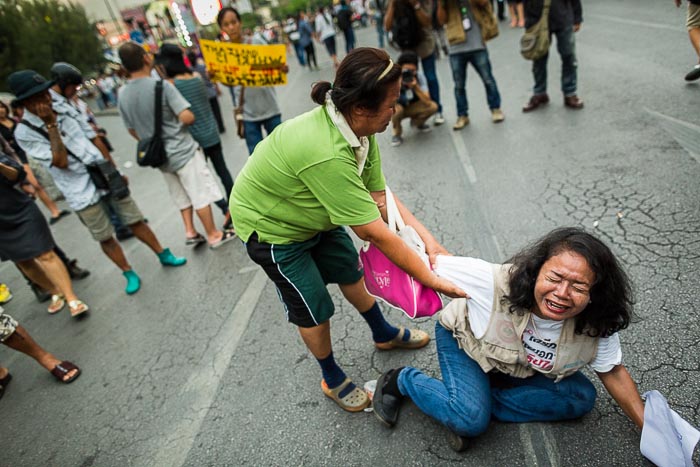 A woman collapses in tears after confronting soldiers during a pro-democracy protest at Victory Monument.

Monday was the first "normal" day after the coup last week. Schools were back in session and offices and malls tried to have normal hours.

In Coup News, General Prayuth Chan-Ocha, Thailand's de-facto Prime Minister, announced that the coup received the Royal endorsement and was sworn in as the head of the National Council for Peace and Order (NCPO). He started paying the rice farmers what they were owed under Yingluck Shinawatra's rice pledging scheme and promised to alleviate hardship in the country. 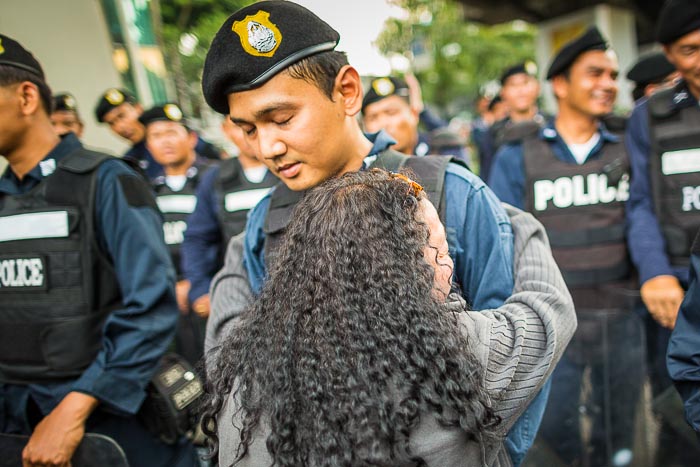 A woman hugs a police officer on the front line of an anti-coup rally in Bangkok.

Prayuth's announcement though did not mollify his critics. Thousands of people came to Victory Monument, the scene of previous anti-coup rallies, to demand an end to military rule and a return to elections. People marched around the monument chanting "elections!!" and "Prayuth, get out!"

Authorities anticipated Monday's rally and shut down most of the stations on the BTS Sukhumvit Line, that goes north up Phaya Thai Road past Victory Monument, to limit access to the rally site. There was a large military and police presence around the monument but people still came.

At first isolated individuals would stand up and tape their mouths shut (to protest the apparent loss of free speech) or flash anti-coup signs before quickly walking away. The crowd (this is a very busy shopping and transportation hub in Bangkok and is always busy) would applaud and few more people would spontaneously protest, then a few more and in a matter of minutes hundreds of people were marching around the Monument.

Within 30 minutes thousands of people were in the Monument displaying signs, chanting and marching. Tension grew when police and military closed in but authorities made no effort to break up the protest.

A bilingual army officer used a loudspeaker on a Humvee to encourage protestors to go home. He switched back and forth between Thai and English, in Thai urging protestors to ignore the foreign media and go home and in English telling the media that coups were nothing new in Thailand and that the army knew what it was doing and foreign reporters should go back to their hotels, at one point saying "Game over."

This went on for more than a hour. Authorities held their lines and protestors made no effort to physically confront police or military. There was a lot verbal confrontation but many of the protestors seemed to be middle class Bangkokians and there were a lot of women in the crowd. It was not a crowd looking for a physical confrontation. 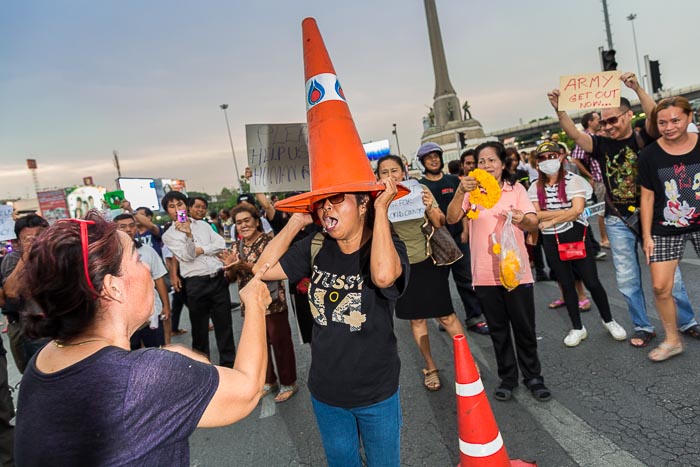 Women pro-democracy protestors mock the PDRC anti-government protest (now ended) by playing with a traffic cone. Guards at PDRC protest sites earned a reputation for brutality after they beat up a number of motorists who moved their traffic cones during the PDRC protests. As a result, traffic cones have become politicized in Thailand.

As darkness fell, people started heading home on their own and the protest more or less fell apart. By about 6.15PM most of the crowd was gone (or eating in some of the many restaurants around Victory Monument) and the military was moving freely through the area. 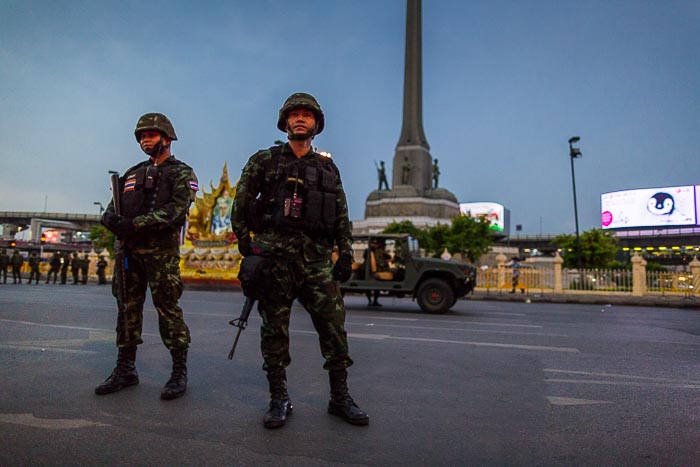 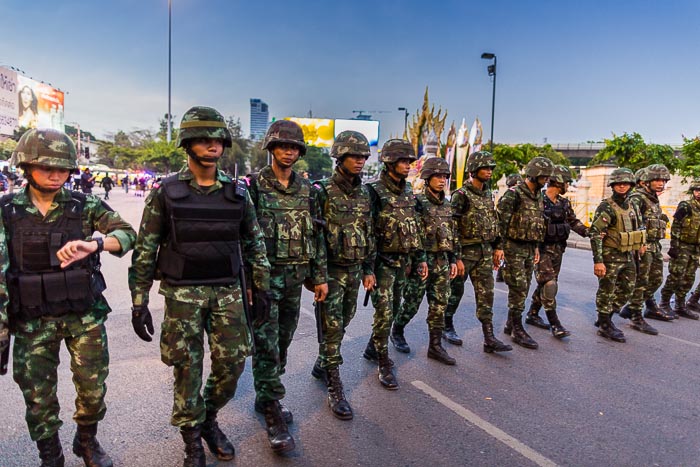 After protestors left, soldiers walked around the Monument to make sure it was clear.

There are more photos from Monday's protest in my archive or available from ZUMA Press.
Coup Protest May 26 - Images by Jack Kurtz
Finally, most of the photos in my archive are available for editorial use or self fulfillment as prints. If you see something you'd like to use or just hang on the wall, click on the "Add to Cart" button and follow the onscreen prompts.