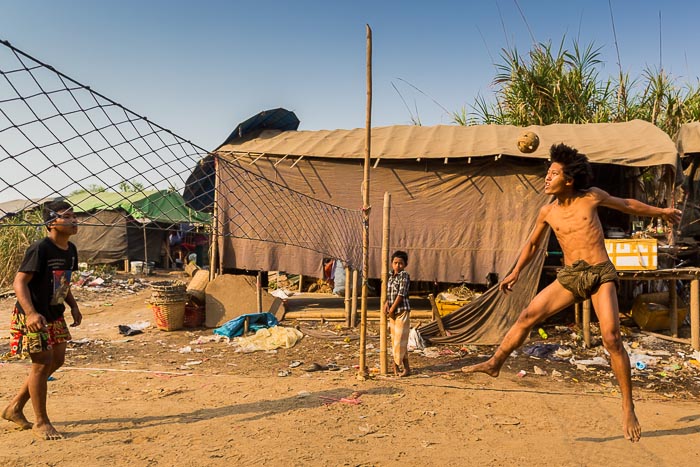 Young men play "takraw," a Southeast Asian game that is sort of a cross between soccer and volleyball, in a no-man's land between Thailand and Myanmar.

I set out one morning to photograph the market between the Thai and Burmese border in Mae Sot. It's in Thailand, but the vendors are all Burmese. They sell a selection of black market liquor, black market cigarettes and a bewildering array of sex toys. There are also some seafood vendors selling shrimp the size of my forearm. The lobsters at Red Lobster are smaller than the shrimp in this nameless little market.

The market vendors live in a Burmese community that is on the Thai side of the border but apparently run by Burmese gangsters. I was walking by the community on my stroll through the market and a couple of guys were playing takraw on their side of the line so I went down to their net, about 5 feet west of the Thai line, technically in Thailand but in the area controlled by Burmese gangsters.

I photographed the guys playing for a few minutes and two drunks came up and told me to stop photographing. The drunks were pretty belligerent (the takraw players were fine with my photographing them) so I stopped photographing for a bit. Then they started poking me and I decided to leave.


I stood to walk the five or so feet back to the Thai side and the drunks pulled me down and told me to stay (they were speaking Burmese, which I don't speak, so I'm guessing at what they were saying.) I sat for  a couple of minutes and they kept poking me. I'd had enough, I stood up and started to walk the five feet back to the Thai line of control. They grabbed me and started pulling me into their village, towards the Burmese side and away from the Thai line.

Three women came up to the two drunks and told them to let me go (I'm guessing) one of the guys took a swing at one of the women and then the three of them picked up sticks and started clubbing the two gangsters.

I climbed the stairs up to the Thai side and one of the vendors grabbed me and pushed me further into Thailand and gestured that I should leave. I walked back to the border post to look for Thai law enforcement (who usually patrol the market) but didn't see any.

It was about the weirdest thing I've had happen to me since I arrived in Thailand. All of my experiences here (and in Burma, when I've gone there) have been positive. I've run into people who didn't want to be photographed, usually because they were doing something that wasn't entirely legal. But I have never had someone grab me and try to rob me. Even in Bangkok, when I'm photographing the violent anti-government protestors, they've been aggressive to the point of rudeness about not being photographed but as soon the cameras go down they're okay. This attempted robbery/kidnapping was a first.