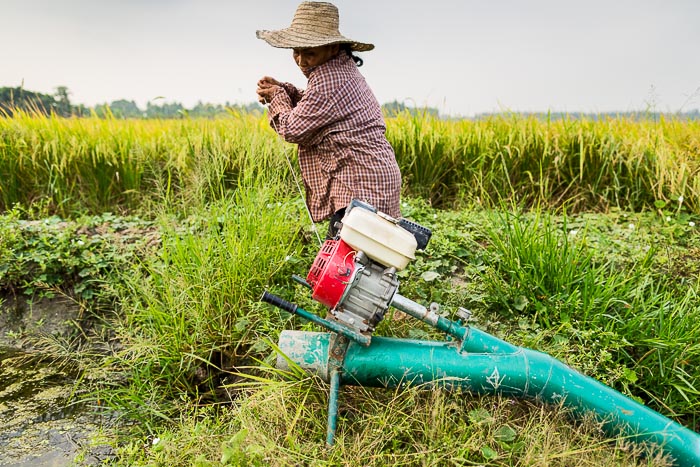 A farmer in Pathum Thani province tries to start a water pump to irrigate her rice fields. There hasn't been any significant rain in the area since November.

It's the dry season in Thailand. The rainy season usually ends in late November but even during the dry season it normally rains a little bit. Maybe only once or twice a month but we get something. Last year it rained so much through January that the salt collection season was cut by a month.

A drought in Thailand doesn't look like a drought in Australia or Arizona. Arizona is bone dry, desiccated almost. There's no surface water to speak of and the state's main river, the mighty Colorado River, is so overstressed it can't meet the needs of all the people that depend on it.

Central Thailand is in the middle of a vast flood plain. The Chao Phraya River flows into the Gulf of Siam just south of Bangkok. Water from the canals, creeks and tributaries of the Chao Phraya flow through the region. But those canals, creeks and tributaries are at record lows this year and the water stored upcountry behind the dams, is running out. 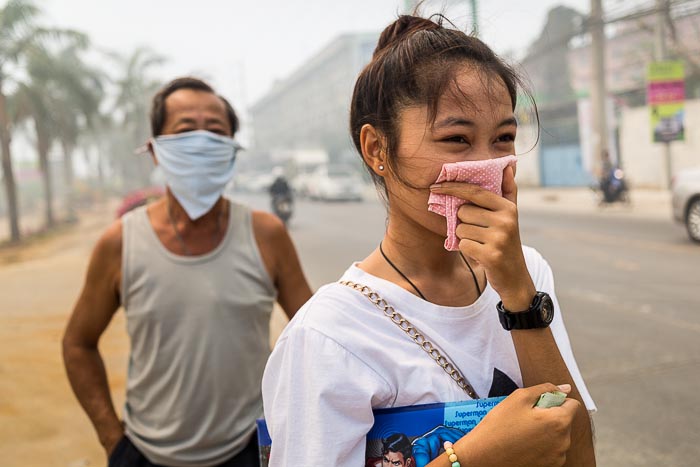 People cover their mouths and noses as smoke from a fire in a garbage dump fouls the air over Samut Prakan, southeast of Bangkok. The fire started spontaneously in the dump, where it hasn't rained since November.
Compared to Arizona, Thailand doesn't look dry.


But talk to the farmers who rely on the water and you hear a different story. The woman in the photo at the top of this entry told me she normally gets three rice crops off her land. This year is so dry she will get just two. She said some of her neighbors may lose their farms because the loss of one rice crop would push them into insolvency.

A few kilometers away, in Samut Prakan, the drought is having a different impact. It was so dry last week that trash in the dump started burning. Thousands were evacuated from the areas around the dump and the foul smelling smoke drifted over central Bangkok. 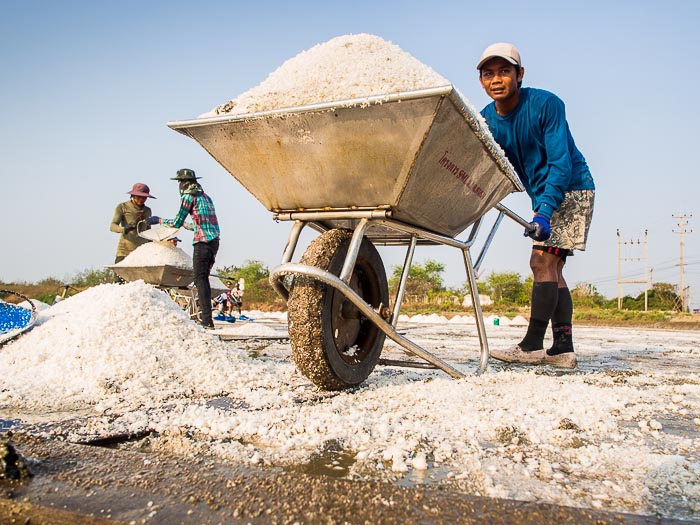 Workers in Samut Sakhon collect salt in an evaporation pond.

There is a silver lining of sorts though. Samut Sakhon and Samut Songkhram provinces, south of Bangkok, have some of the last salt fields left in central Thailand. Last year their season was cut short because it rained so much. This year, one salt farmer told me, they should get at least an extra month out of their fields. A worker pushes a wheel barrow full of salt past a communal iced tea cooler.

Although that's good news for the salt workers, it doesn't help the farmers, who are struggling to get through the dry season.

The Thai government hasn't been very optimistic about the future. They are already doing some "cloud seeding" in the far north but there's not much they can do. If it's not going to rain, it's not going to rain. The Thai weather office has issued drought warnings, advised farmers to try more drought resistant crops and urged consumers to conserve water. At the same time they warned that an El Niño is forming and the coming two years could be driest on record.

I will be working on drought and weather stories through the dry season. These pictures are from the first outings I made to Pathum Thani, Samut Prakan and Samut Sakhon. I am also going to Chiang Rai to photograph the drought in northern Thailand.
Thailand Drought 2014 - Images by Jack Kurtz


Finally, most of the photos in my archive are available for editorial use or self fulfillment as prints. If you see something you'd like to use or just hang on the wall, click on the "Add to Cart" button and follow the onscreen prompts.
Posted by Jack at 00:36