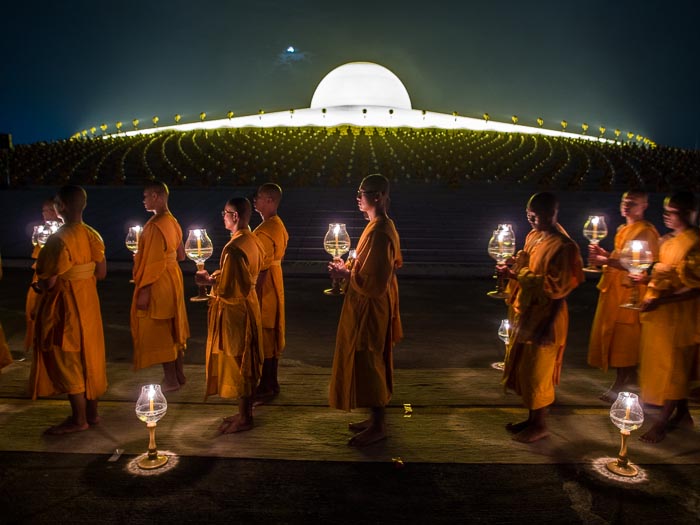 Buddhist monks line up for the candlelight procession at Wat Phra Dhammakaya in Pathum Thani.

Friday was Makha Bucha Day one of the most important religious holidays in Thailand (and other Theravada Buddhist countries like Myanmar, Cambodia and Laos). It marks the day in Buddhist history when more than 1,200 Arhantas (enlightened ones) spontaneously came to hear the Buddha preach more than 2,500 years ago.

People come to their temples in the morning to pray and make merit by presenting monks with food, flowers and money. They come back in the evening to meditate. The observances culminate with a candlelight procession around the temple.

I photographed my first Makha Bucha Day in Kanchanaburi several years ago. It was a small temple in the jungle and it was a wonderful experience. Since then, Makha Bucha Day has become pretty much my favorite Thai holiday. (I even photographed it at a Thai Buddhist temple in Chandler, AZ, one year when I couldn't be in Thailand for it.) 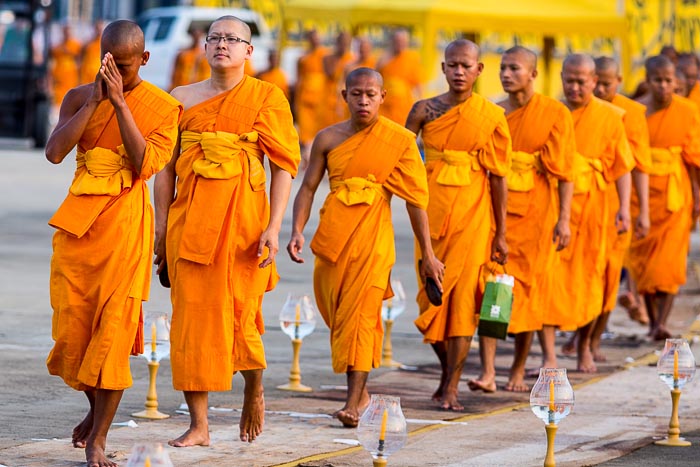 Wat Phra Dhammakaya is the most unique Buddhist temple in Thailand. It's in Pathum Thani province, about an hour from my apartment in Bangkok. The temple looks nothing like traditional Thai temples - more than anything it looks like a giant UFO in a rice paddy waiting to lift off for the heavens. It's the home of the Dhammakaya sect of Theravada Buddhists and not without controversy but it hosts one of the most spectacular Makha Bucha observances in the Bangkok area. 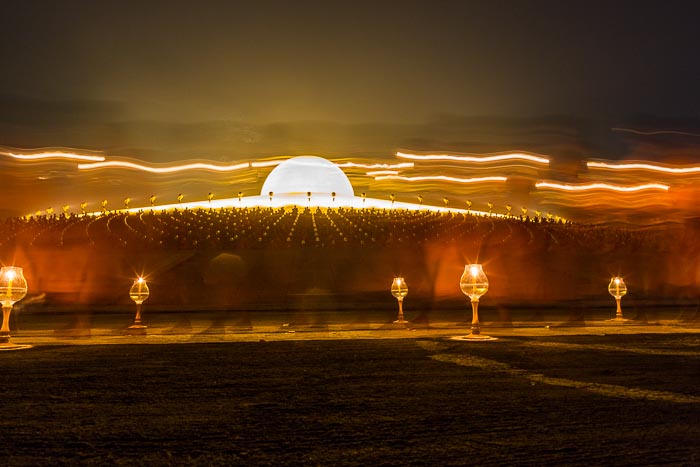 Back in the long gone days of film, photographing something like this meant using ISO400 transparency film and "pushing" it one stop to ISO800. Pushing film meant deliberately underexposing it and then extending the development time to make up for the underexposure, it almost always was a Faustian bargain. ISO400 film was not that good to begin with (low contrast, lots of grain) and the process of pushing it aggravated its already poor qualities.

Digital handles high ISO much, much better than film ever did. We have access to really clean ISOs in the 1600 - 3200 range, something we could only dream of back in the day. But there are times when even ISO3200 is not enough. The candlelight processions at Makha Bucha Day is one of those times. It's dark, really dark, around the Cetiya and we were kept a good distance away from it so it meant using long lenses. 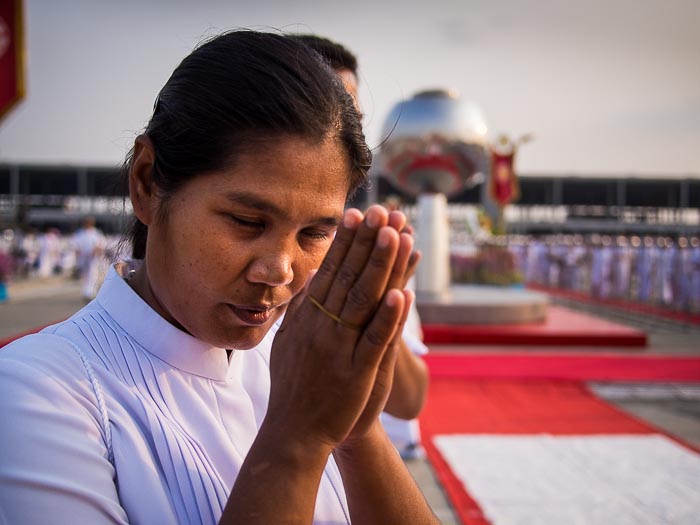 A woman prays at the beginning of the evening meditation service.

There are more photos from Makha Bucha Day in my archive or available from ZUMA Press.


Makha Bucha Day at Wat Phra Dhammakaya - Images by Jack Kurtz
Finally, most of the photos in my archive are available for editorial use or self fulfillment as prints. If you see something you'd like to use or just hang on the wall, click on the "Add to Cart" button and follow the onscreen prompts.
Posted by Jack at 08:07