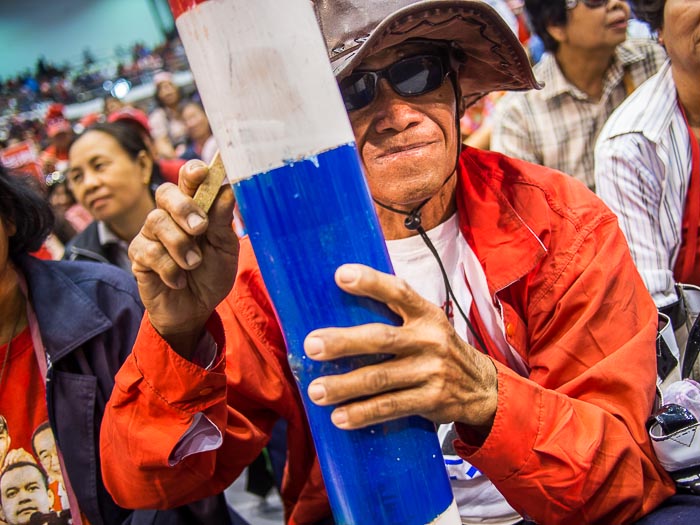 The Red Shirts, who by and large support the government of Yingluck Shinawatra, have been generally quiet during the anti-government protests gripping Bangkok. Their leadership has made a few statements about supporting the government but they have made it a point to stay out of Bangkok and not directly confront Suthep's followers.

(That's not to say they've been completely absent. Many blame the grenade attacks and drive by shootings that have hit anti-government rally sites on the Red Shirts.) 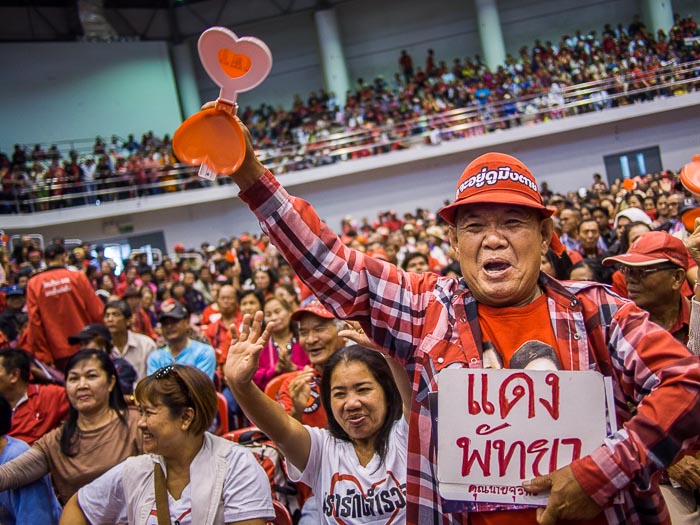 A Red Shirt supporter cheers the leadership announcement that the Red Shirts will confront Suthep.

Sunday about 4,000 Red Shirts met in a sports complex in Nakhon Ratchasima (Korat) to settle on a plan for confronting Suthep. They decided they would come to Bangkok to defend the government against what they see as undemocratic forces that are trying to promote a coup in Thailand.
The rhetoric used by both sides only amps up the anger. Suthep refuses to negotiate with the government and openly taunts Red Shirt leaders with the prospect of violence (over the weekend he said his "popcorn vendors" - code for gunmen - were waiting for Red Shirt leaders). The Red Shirts respond by beating war drums.

None of this is good news. Peace in this country seems to be hanging by a thread. There are near nightly shootings at the protest sites and attacks on protest sites are getting more brazen. Grenades were fired or thrown into protest rallies over the weekend killing at least four (three of them children). No one has been arrested for any of the attacks and bodies are piling up on both sides.

On one hand, Suthep's supporters pull assault weapons and fire on police with seeming impunity (Suthep later canonized the gunmen, calling them his "popcorn army" because they hid their weapons in corn feed sacks.) On the other hand, Suthep's guards and supporters have been targeted by unknown assailants thought to be aligned with Red Shirts but with no hard evidence linking them to Red Shirts.

If the Red Shirts do decide to march to Bangkok en masse to confront the protestors it will almost set off fighting between the two sides. The police seem unable to intervene. They don't have the training or the equipment (and the protestors view them as being aligned with the Red Shirts) to separate the two sides. It's likely that widespread fighting would draw in the army as the only force large enough to keep the factions apart (Red Shirts allege that is Suthep's ultimate goal, to provoke a coup against the government).

These are some of the photos I made at the Red Shirt rally in Korat Sunday.
Red Shirts Rally in Korat - Images by Jack Kurtz
Finally, most of the photos in my archive are available for editorial use or self fulfillment as prints. If you see something you'd like to use or just hang on the wall, click on the "Add to Cart" button and follow the onscreen prompts.
Posted by Jack at 10:30