Back in Mae Sot 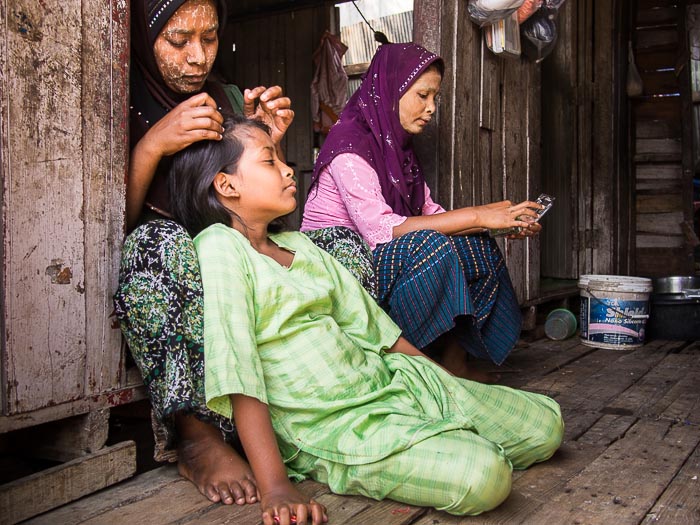 Burmese Muslim women in their home in Mae Sot.

I am back in Mae Sot working on a story about unintended consequences. I like this town, there's a nice vibe to it and there's a lot happening.

The changes here through the years have been breathtaking. My first time up here, in 2008, the Moei River, which is the border between Thailand and Myanmar, was heavily militarized. Armed Thai soldiers backed by crew served weapons lined the riverbank. Burmese refugee camps in Thailand were subject to occasional shelling from Burmese forces just across the river.

Burmese in Thailand spoke in whispers about what was happening in their country and pictures of democracy heroine Aung San Suu Kyi hung in almost every tea shop in town.

That was then and this is now. It's a much more relaxed place now. There's still a uniformed security presence on the river, but the weapons are put away and the big weapons are gone completely. Aung San Suu Kyi's portraits still hang in most of the shops (although not as much as it did before) but people talk openly about the changes in Burma. Mae Sot is buzzing with development. Shopping centers and condominiums are going up all over town.


Burmese are still coming to Thailand but they're not fleeing war anymore, now they're coming because despite all the changes in Myanmar the economy is still a wreck. There aren't many jobs, food is expensive and health care unavailable. So they come to Thailand, but as economic refugees and migrant workers rather than victims of state sponsored violence.

At the same time, Myanmar has opened itself to western investment and normalized relations with western NGOs. The NGOs are flocking to Myanmar because the need is so great.

And that's where the unintended consequences come in. Even as the NGOs are moving into Myanmar, Burmese continue to come to Thailand. The NGOs have very finite resources and a dollar spent on a project in Myanmar is a dollar not available to be spent in Thailand.

A dollar not available to pay for a teacher or buy rice or get medical care to a migrant. Already rations have been cut in most of the refugee camps that dot the border. The fear now is that resources will run out leaving hundreds of thousands of people in dire straits.

I will be up here for about a week visiting clinics and schools, trying to see how aid providers are coping with reduced resources.

Finally, most of the photos in my archive are available for editorial use or self fulfillment as prints. If you see something you'd like to use or just hang on the wall, click on the "Add to Cart" button and follow the onscreen prompts.
Posted by Jack at 10:00