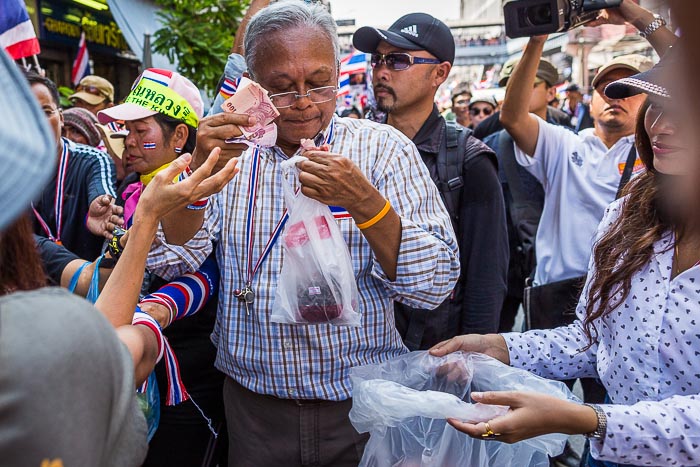 Suthep Thaugsuban, leader of the anti-government protests, stuffs wads of cash into a plastic bag during a march turned fundraiser Sunday.

Bringing down a government is expensive. Someone has to pay for the stages, the generators, the food, the entertainment; the whole infrastructure that goes into the endeavor.

Suthep Thaugsuban, the leader of the anti-government protestors, went on a walkabout Sunday with thousands of his followers. It was originally announced as a warmup to the Shutdown Bangkok protests planned for later this month. But it was also very much a fundraiser for the protestors.

Political donations in the US are, usually, carefully tracked and candidates seldom accept cash from supporters during campaign rallies (not to say that candidates don't accept cash - ABSCAM and countless political scandals have shown that American candidates willingly accept cash) but here it's different. 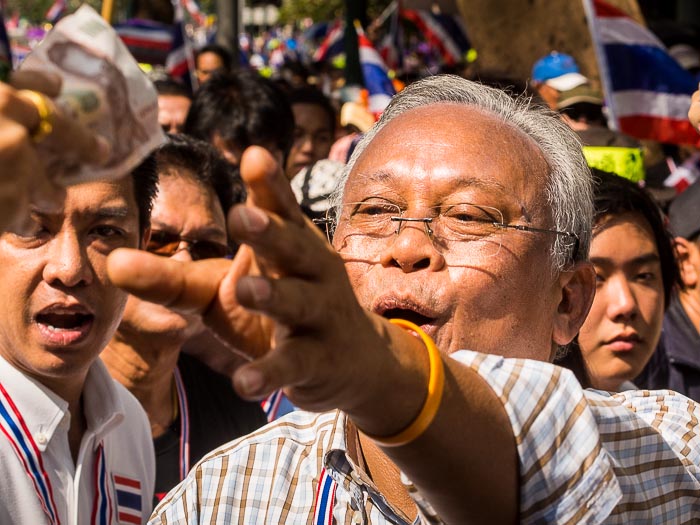 Suthep reaches for a 1000Baht (about $30US) note offered by a supporter Sunday. 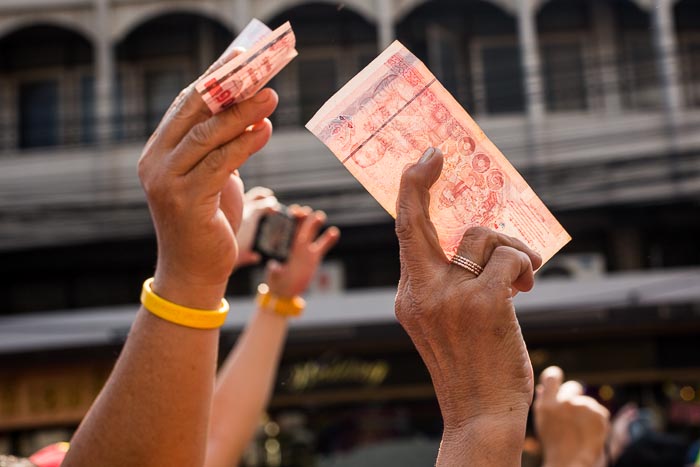 People hold cash over their heads while they wait for Suthep.

Suthep's supporters lined the route of the march. They were waving Thai flags, blowing whistles (always blowing whistles) and cheering. When Suthep came into view they started screaming and blowing whistles even louder. He got a real rock star greeting. Then they reached into their pockets and started thrusting cash into his hands. Wads and wads of cash. I must have seen tens of thousands of Baht change hands Sunday. Some people offered up only 20-40Baht. Others a few hundred but there were some that were pushing five or six 1,000Baht notes into Suthep's hands. He accepted each donation and passed it off to an assistant who put the cash into plastic garbage bags. 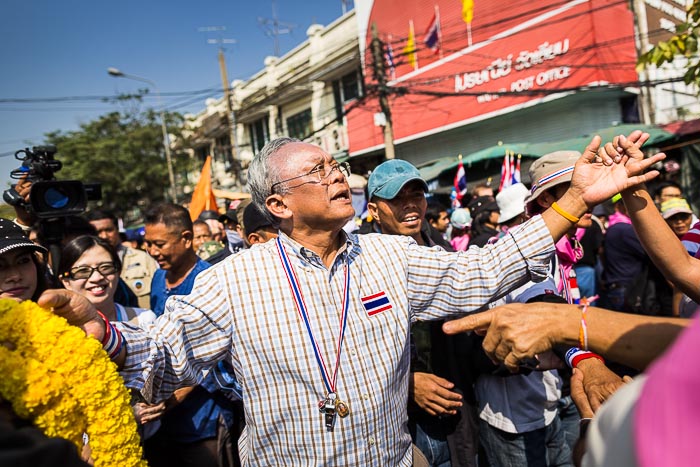 People reach out to touch Suthep as he passes through the crowd.

Covering these protests you realize how divided Thailand is. The crowds greeting the anti-government protestors have been huge, diverse and enthusiastic. There is no denying that. But it also can't be denied that crowds that greet the Red Shirts and their candidates are huge and enthusiastic (although not as diverse). Bangkok is the home turf of the protest movement, so it's relatively easy for them to mobilize big crowds here, compared to the pro-government Red Shirts who have to come to Bangkok from the provinces. 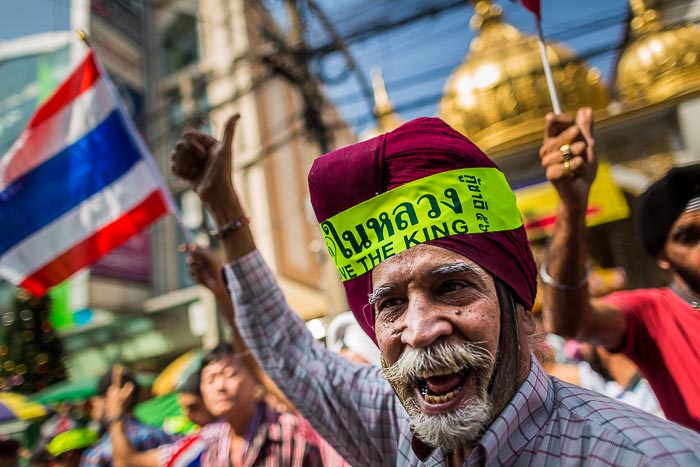 A Thai-Indian Sikh cheers as Suthep walks though Bangkok's "Little India" which is next to Chinatown.

Suthep's plan to shut down Bangkok starts January 13. It will be interesting to see how successful he is and what the ramifications are. So far, the protestors have pledged to not shut down the Skytrain, subway or airports or to turn off electricity or water supplies. For a city always on the verge of gridlock (it's no joke, Bangkok traffic is a nightmare), just the threat of blocking major intersections could be enough to send the city's denizens into panic mode.

These things are unpredictable and if the shut down plan doesn't succeed it's not impossible to see the protestors ratcheting up the pressure by shutting down essential city services.

Several airlines have already announced plans to reduce the number of flights in and out of Bangkok, a major hub of Southeast Asian air travel and there have been reports in the Thai press that insurers may not cover airlines in Bangkok, which would be a huge blow to Thai tourism and air travel in the region. I think people are going to plan for the worst and hope for the best. For some, it might mean getting out of Bangkok for a week or two, either go upcountry or to a less stressful neighboring country. Burma or Laos come to mind, but not Cambodia.

A lot of people are going to stock up on staples - bottled water, canned goods, instant noodles, bread etc. Stuff that doesn't need refrigeration (in case protestors cut electricity). I plan to stock up on bottled water and some canned goods but I will be out every day photographing and transmitting (assuming they don't cut power and internet).

There are more photos of Sunday's cash stroll in my archive or available from ZUMA Press.