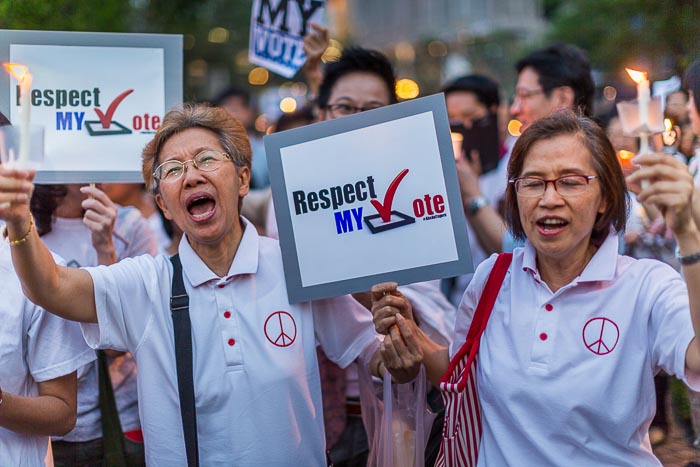 Hundreds of Thais gathered in Banjasiri Park, a few hundred meters from the Asok protest site, to rally for peace amidst Thailand's political chasm and call on all sides to respect Thai democracy.

There was another candlelight vigil Sunday night, in Benjasiri Park. Several hundred people gathered to light candles, call for peace in Thailand and resist urges to weaken Thai democracy. Sunday night's vigil came on the heels of two grenade attacks on protest sites, one Friday and a second one Sunday afternoon.

Violence on the periphery of the protest sites is nothing new. There have been shootings and assaults on guard positions almost from day one. But the violence is becoming more extreme (grenades rather than gunshots and fistfights) and is targeting midday crowds rather than late night guard positions. That change in tactics made Sunday's call for nonviolence all the more pressing. 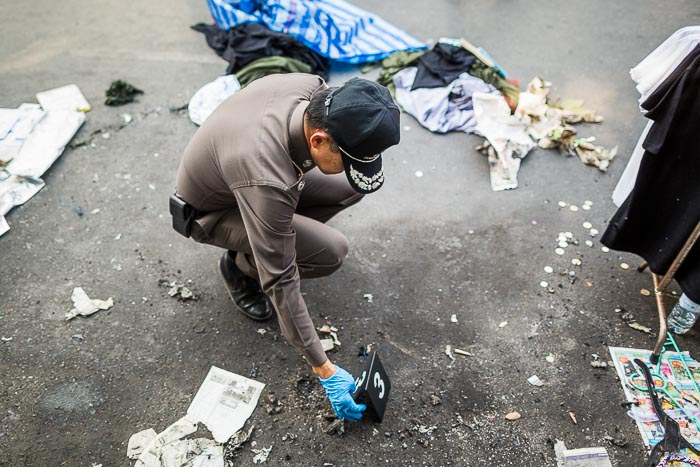 A Thai police officer collects evidence at the scene of a grenade attack Sunday.

Several people came up to me Sunday night and told me that the peace movement transcends politics. They told me they support neither fugitive former Prime Minister Thaksin Shinawatra nor protest leader former Deputy Prime Minister Suthep Thaugsuban (who faces murder charges), they do support, they said, Thais' right to vote and choose their own government. Which indirectly means they oppose the Suthep led protests because Suthep wants to replace Thailand's elected government with a council of unelected people who would govern while Thai politics are reformed. 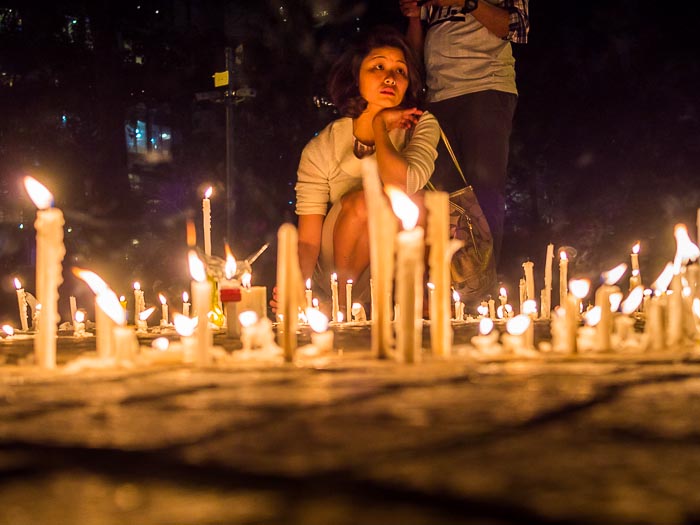 A woman sits amidst candles in Benjasiri Park.

For his part, Suthep keeps ramping up the protests. Today he's leading marches to try to shutdown parts of the Thai financial system (banks that deal with the government) and he's encouraged his followers to shut down southern Thailand, which is the home base of the Thai Democrats and where the governing Pheu Thai party has little influence.

Prime Minister Yingluck Shinawatra (sister of Thaksin) insists that the election will take place on February 2. Suthep vows to block or disrupt the elections.

There are more photos of the vigil (and Shutdown Bangkok) in my archive or available from ZUMA Press.
Candlelight Vigil for Democracy - Images by Jack Kurtz