Funeral for a Protest Leader 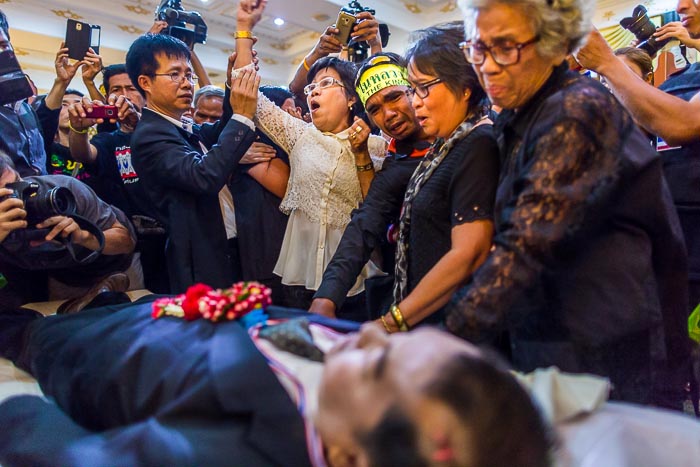 Anti-government protestors rally around the body of Suthin Taratin at his bathing ceremony at Wat Sommanat. Suthin was murdered leading an anti-election rally during early voting Sunday.

Early voting in the Thai election was supposed to Sunday January 26. Anti-government protestors, led by Suthep Thaugsuban and his supporters vowed at one point to disrupt voting, later Suthep walked that back a little and said they wouldn't disrupt voting but would hold vigils at polling places to remind people of the illegitimacy of the election.

I went to a couple of polling places, protestors' "vigils" included blockades to keep voters out and locking election workers in a school to prevent them from working at their polling stations. Most of the polling stations in Bangkok and southern provinces (home base for the anti-government protestors) were closed by mid-morning. 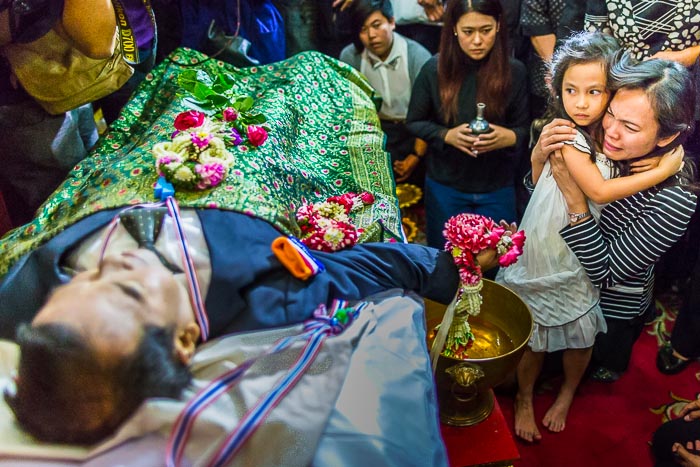 A woman and her daughter at Suthin's bathing ceremony.

Thousands of Thais have died since the 1970s either fighting for the right to vote or defending the right to vote and people at many polling places took offense at the protestors' efforts to shut down the election. "Respect my vote" has become a rallying cry to many Thais who don't favor either Thaksin or Suthep but do favor democracy. These were people who knew the anti-government protestors would try to hinder their voting but they chose to exercise their rights by going to polls. There were several scuffles and confrontations between anti-government protestors and people trying vote and Reuters made a photo of Suthep supporters trying to choke a man who wanted to vote.

By far the worst incident was in Bang Na, where Suthin Taratin was murdered. Suthin, a "core leader" of PEFOT, one of the anti-government factions, was leading an anti-election rally near a polling place when pro-government Red Shirts confronted Suthin's group. Shots were fired, allegedly by the Red Shirts, and Suthin hit in the head. He died before reaching the hospital.

His funeral started Monday with a bathing ceremony. He will be cremated, probably later this week.

The general election is still scheduled to go ahead Sunday, February 2. Based on the violence last weekend and Suthep's vow to disrupt the general election and the government's very soft approach to the crisis I fully expect the election to either be cancelled before it takes place or results to be nullified because the anti-government protestors stopped people from exercising their right to vote. (UPDATE Jan 29: No delay. We have an election Sunday.)

There are more photos from the bathing rites in my archive or available from ZUMA Press.
Mourning Suthin Taratin - Murdered Thai Protestor - Images by Jack Kurtz
Finally, most of the photos in my archive are available for editorial use or self fulfillment as prints. If you see something you'd like to use or just hang on the wall, click on the "Add to Cart" button and follow the onscreen prompts.