A Prayer for Peace in Thailand 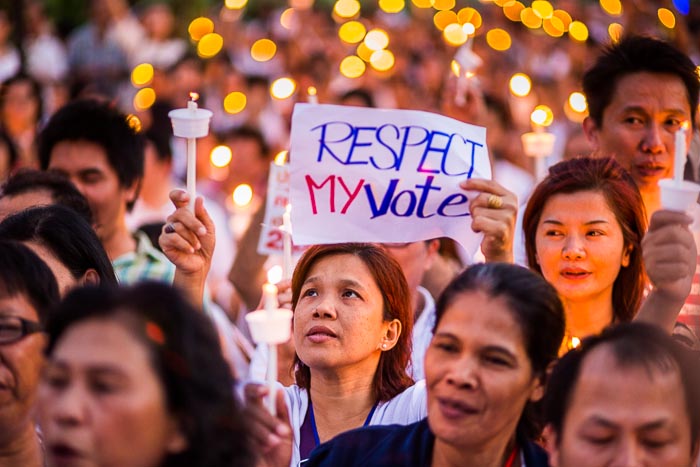 A woman at Thammasat University holds up a candle and sign during a candlelight vigil in Bangkok Sunday.

I'm a little behind on blogging because I've been out photographing the anti-government protests, or events related to the protests. Sunday evening there was a very nice event at Thammasat University that I intended to write about but didn't have a chance to until today. About 500 people from all walks of life came to the university, once a hotbed of Thai radicalism, for a candlelight vigil and a call for peace and respect for democracy in Thailand. 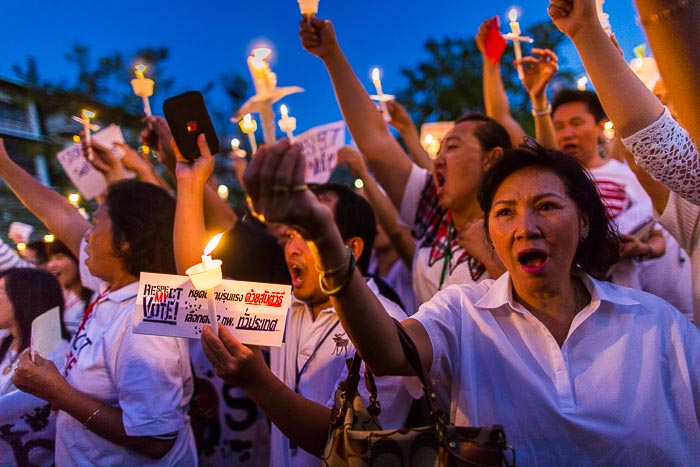 People held up signs that said "respect my vote," and sang John Lennon's "Imagine." The vigil was about a kilometer from the main protest stage and there were some anti-government protestors gathered on the sidewalk in front of the University.

They didn't approach vigil goers and interfere in any way but their presence was unsettling to some. A couple of people approached me and asked if I thought it was safe to be there and whether or not I thought the protestors would attack people at the vigil.

I was surprised by the question - as high as emotions are running right now, to attack people going to a peace vigil would be out of character for the protestors. That's not to say they wouldn't attack government supporters - there have been several clashes between Red Shirts (who support the government) and protestors in provinces outside of Bangkok but the candlelight vigil was a non-partisan event. Most of the people were there hoping to forestall violence that some Thais fear could spiral into a civil war rather than support either the government or the protestors.

As people were holding their candles in the evening sky, word was breaking via Twitter and social media that Shutdown Bangkok was starting early. Protestors had left Democracy Monument and moved to Pathum Wan intersection (near MBK) and closed roads in the area. This news had a disquieting effect on some people, who wondered aloud if it would be safe to go home past the roadblocks.

There are more photos from the candlelight vigil in my archive or available from ZUMA Press.
Thais Rally for Peace - Images by Jack Kurtz
Finally, most of the photos in my archive are available for editorial use or self fulfillment as prints. If you see something you'd like to use or just hang on the wall, click on the "Add to Cart" button and follow the onscreen prompts.