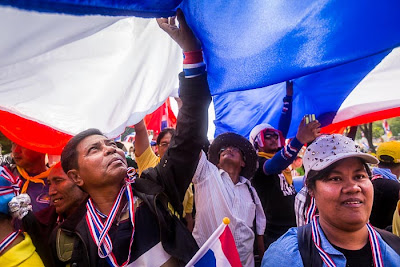 Man that's true. And if any farang (Thai for foreigner) tells you what's happening in Bangkok right now is exactly clear, they're probably making it up.

I am a guest in this country. I feel privileged that I am allowed to live here and work here as a journalist with relative ease. Even if I have an opinion about the political turmoil Thailand has plunged itself into, it wouldn't be appropriate for me to express that opinion. This is a matter for Thais to resolve and it's not my place to publicly express an opinion about Thai democracy, just as we (Americans) don't like it when non-Americans express an opinion about our democracy. (Witness the efforts by the Right to get Piers Morgan fired from CNN and expelled from the US after he made comments about gun ownership.) 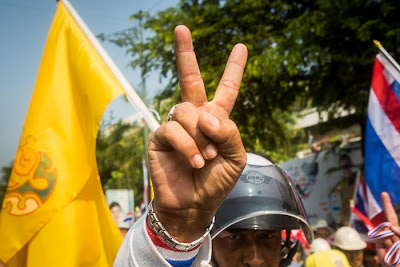 An anti-government protestor flashes the "V for Victory" sign after Yingluck Shinawatra announced that she was dissolving Parliament and calling new elections.

I've been photographing the protests since I got back last month. I have no idea how or when they're going to end. The collapse of the government is not enough for the protest leaders, who want to see the Thaksin family completely out of Thai politics. Protest leaders have called on the Prime Minister to surrender herself for arrest, called on the police to resume their normal duties and called on the military to protect government offices. There is no precedent, short of a military coup, for what the protestors seem to be demanding.

Thailand has a long history of military coups. There have been 11 successful coups and 7 failed coups  going back to 1932. That was then and this is now. The international community is not as accepting of coups as it once used to be. Thailand's last coup, in 2006, set the stage for the problems currently gripping Thailand, so many Thai political observers are not predicting a coup this time.

My hope, and I suspect the hopes of a lot of Thais, is that this will somehow resolve itself peacefully and Thailand can move forward. 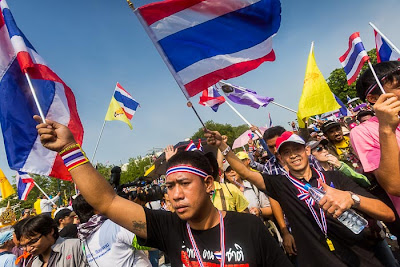 Anti-government protestors march on Government House after the government resigned.

There is a joy to living in this country. Thais are among the most hospitable people I've ever met - whether a businessman in an air-conditioned office in Bangkok, a farmer in a rice paddy in Isan, a ticket taker on a train or bus, a market vendor or construction worker, Thais have always treated me with nothing but grace and warmth. I hate to see these protests ripping apart the country.
Thai Government Collapses In Face of Massive Protest - Images by Jack Kurtz

From Stephen Stills' "For What It's Worth," recorded by Buffalo Springfield.