A Phoenix Rising From the Ashes 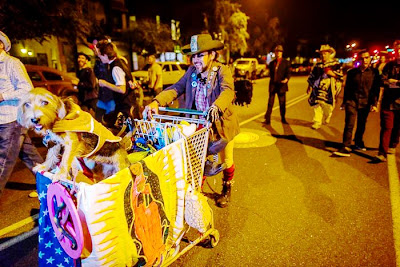 A participant the Phoenix Annual Parade of the Arts walks down Roosevelt Street during the 7th iteration of the popular event.

There's a renascence of sorts going on in central Phoenix. The "Roosevelt Art District" has breathed new life into a part of town that, for the years that we lived in downtown Phoenix, was little more than an urban wasteland. Blocks of empty houses butted up against downtown down on its luck. At one point, before the Arizona Cardinals moved out to Glendale, there was talk of razing the whole area and building a NFL stadium there. I always thought the area had tremendous potential but needed to reach critical mass before any redevelopment could take place.

Luckily the NFL plan went nowhere. Arizona State University built a campus in downtown, near the blighted neighborhood, bringing lots of young people into the area. Phoenix built a decent light rail system with stations near the neighborhood, making it easier for people to get to the neighborhood. The "First Friday" art walks became main stream cultural events that draw thousands into the neighborhood. It seems that critical mass arrived and almost nobody noticed it.

A friend sent me a link to the Phoenix Annual Parade of the Arts, an outgrowth of First Friday, we thought it would be an interesting evening so we down to the Art District to check it out.

The neighborhood has been reborn. Once empty houses are now home to small cafes, used bookstores and art galleries. Once deserted streets are now lined with cars, people walk through the neighborhood grazing and shopping.

Apple Computer, famously, did an ad called "Here's to the Crazy Ones"a paean to the notion of thinking outside the box. The artists and authors, chefs and musicians who moved into the Art District embody that ideal. I move back to Bangkok this week but I was glad to see the success of the Art District and the redevelopment in the neighborhood. If you're visiting Phoenix and happen to be in town on a First Friday you owe it to yourself to downtown and visit the First Friday Art Walk and see a neighborhood in the process of being reborn.

The Phoenix Annual Parade of the Arts - Images by Jack Kurtz

To learn more about the travails of urban Phoenix I recommend you read the Rogue Columnist by Jon Talton. Talton is a native Phoenician and former business columnist at the Arizona Republic. His blog focusses on Arizona politics and Phoenix in particular and the struggles the city faces in light of assaults by the Tea Party on immigrant populations and right wing attacks on urban lives.
Posted by Jack at 10:49