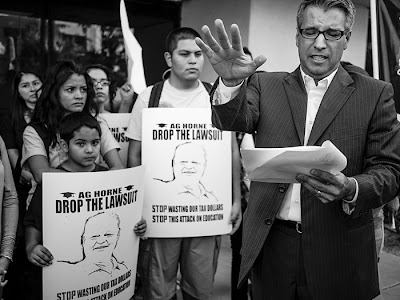 Randy Parraz, an Arizona human rights campaigner and frequent critic of Tom Horne, Joe Arpaio and the Arizona GOP establishment, speaks out against Attorney General Horne in front of the AG's office Thursday.

In a planned act of civil disobedience, a group of DREAM Act supporters blocked the entrance to the AG's offices and were arrested by Capitol police. There were about 100 people at the rally but only eight or nine were arrested. These things are carefully coordinated by the protesters and police. The two groups meet in advance and work out who's going to be arrested. The protesters sit on the floor, the police ask them to leave, they don't and they're arrested.

I've been messing around lately with working in black and white. I thought this assignment would lend itself to black and white, so I set my cameras to record both raw and JPEG (color raw files, black and white JPEGs) and went down to the Attorney General's office.

This is important for sales and reuse since there isn't very much of a market for black and white photos anymore. Even if a photo is ultimately going to run in B&W, most publications would rather start with a color original and make their own conversions.

I use the black and white JPEGs for blog posts or Instagram and I upload them to my PhotoShelter archive (in case someone wants a black and white photo) and I send the color photos to ZUMA.

There are more photos, both monochrome and color, from Thursday's protest in my archive. The color photos are also available from ZUMA Press.